Walking a few blocks on Magazine

Today is a reprieve from the cool/cold and wet weather we've been having. And it's going to get cold over the next couple of days again, so Tom and I thought we'd go out and enjoy the day.

First of all, everyone has on their Saints jerseys and shirts, because of the wildcard playoff game against Philadelphia tonight. That's always fun. 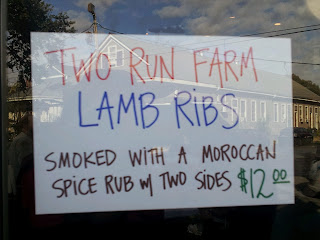 We drove up Magazine and parked our car out in front of McClure's BBQ. I'd read on Facebook that Neil McClure would be selling lamb ribs from Two Run Farm seasoned with a Moroccan spice rub, and I knew that we had to get in on THAT action. So Tom got the ribs with a side of McClure's classic Pork & Pork & Beans as well as a side of the newer BBQ Jambalaya. I was craving a sandwich, so I got his brisket on a Dong Phuong roll with (non-mayo) cole slaw on top. With my usual 4 cheese and macaroni side.

I didn't even think to take pictures of it until we had cleaned our plates. Both meals were delicious, though. The brisket is fantastic, I think Neil has it fine tuned beautifully in his new set up. And the ribs were amazing - they were so flavorful - both the meat itself and the Moroccan seasoning - that no additional sauce was required.

Speaking of sauce, there's a new sauce in McClure's repertoire, a Texas style sauce - spicy and tomato based with bacon and onion. It was good, though I only had a little bit. 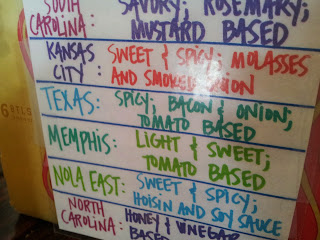 Another great update is adding counter seating! This is so smart. 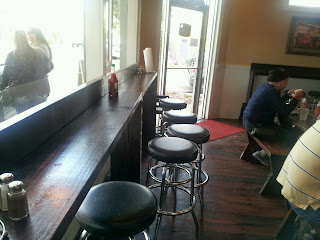 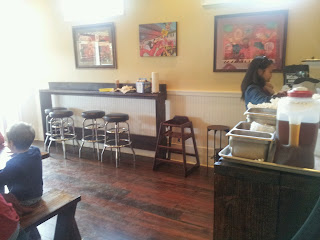 Finally, it seems that Neil has made peace (for now at least) with his neighbors. There was some significant pushback after McClure's opened culminating with the threat of a lawsuit over the placement of his smoker near a condo development. He moved it across the street near a doggie daycare, and those guys are pretty excited about the smell, I imagine! I know it's been a frustrating process for Neil, and I hope that his gestures of being a good neighbor help bring those issues to an end. And through it all, he's been turning out incredible food!

After our delicious and happy-making lunch, we strolled down to La Boulangerie for dessert. They are selling king cakes and galette de rois. The galette de rois is different from the usual New Orleans king cake; it's a traditional French creation that is less common here, but still made to celebrate Twelfth Night.

Since it was too early for galette du rois or king cake, we each had a delicious looking fresh fruit danish; Tom had cherry and I had peach. 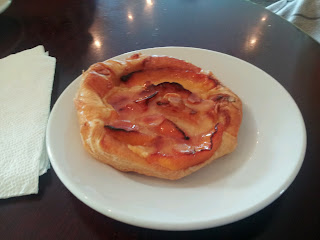 We wandered down Magazine a couple more blocks and looked at the storefronts that were changing, and ran into a friend, of course.