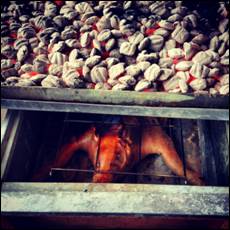 I've been hanging out at Salú with the chefs and owner a fair bit over the past several months, and I can say that they are passionate about bringing the best food to their customers and generous with their time, energy, and sharing that food. I've really enjoyed getting to know Chefs Dustin Brien and Michael Ruoss and talking food, New Orleans food culture, and beer with them.


One of the things they get fired up for (so to speak) is the special event pig roasts that Salú does periodically. (Note: I discovered that the pig is always brined in a solution that includes all the beer they have on tap.) The pig roasts were on hiatus in the summer, since it's an outdoor activity, but they are starting up again at the end of this month. They are also taking the opportunity to use the pig roast to kick off their Oktoberfest celebration (9/24-10/6), which will be covered in more depth on my beer blog.

On Saturday, September 21, for both lunch and dinner starting at 11:30, the Salú team will roast two pigs marinated in German beer, along with a citrus and sugar brine, garlic and rosemary. The pig will be served on a bun with red cabbage slaw and a coarse grain mustard sauce, and sold for $5. The restaurant will also be selling a selection of German beers, including Ayinger Oktober Fest-Märzen on tap, Samuel Adams Oktoberfest, Stoudts German-Style Pilsener.

I'm hoping to get there for dinner, and I recommend checking it out! Stay tuned for more Oktoberfest news on Salú (and other places around town) on my beer blog.
Posted by Nora at 2:30 PM