Last weekend I headed to the New Orleans Wine and Food Experience (NOWFE) with a friend of mine and fellow freelance food/booze writer, Amanda Westbrooks. She had a media pass to attend the two Grand Tastings that happened over the weekend: Friday night and Saturday afternoon. There was a lot going on, and my brain doesn't hang on to wine memories as much as beer, but let's take a look see at my pictures and see what we have.

My favorite wines were... um...  the ports, and there was one vineyard who had a series of Tempernillo Riojas that were aged for different amounts of time, and tasting each of them in succession was very cool. There was one from 1998, one from... 2006, I want to say, and another one just from the last couple of years. All were very well made, and I really liked the progression. It helped me actually feel like I was maybe learning something? But apparently not the name of the vinter, so I lose.

Although many of the details are fuzzy, it was a hella good time. We went back on Saturday, and the crowd was a little pushier and a little ruder than Friday night's. Though I did run into more people that I knew! (I don't think one had to do with the other, though.) OK, let's see what we have here...

Also, there was wine, I guess? Nothing that really stood out to me, I guess. I just don't have the sensory memory for that kind of thing in that kind of atmosphere. It was all pleasant though. And it reminded me how much I still love port!

Saturday night we were able to wrangle tickets to John Besh's fundraiser for his charity, Chefs Move. Chefs Move is a mentorship program for aspiring local chefs of color to train them and bring them back to New Orleans to work. They also were honoring Ms. Leah Chase, so you know that's a good time there.  There were so many awesome chefs at this shindig: Jacque Torres, Aaron Sanchez, Michelle Bernstein, Donald Link, John Currence, Michael Gulotta, and OMG EVERYTHING WAS AMAAAAAAAZING. 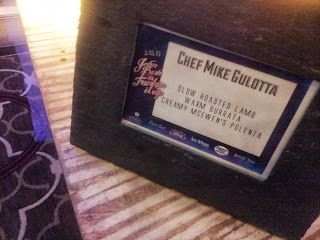 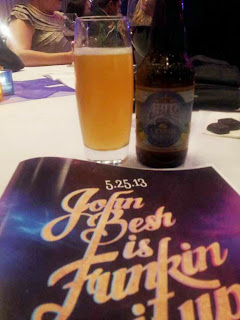 Not pictured: me hanging out with Michelle Bernstein and her banana dessert after I admitted I don't like bananas.

There were so many chefs and restaurateurs there that Chef Michael Gulotta of August cracked that he felt bad for anyone who was out having dinner that night.

Also, Ms. Chase yelled at John Besh because "Funking it Up" is a rude name for an event. "You should have just said you were throwing a party, John!"

I wussed out on the afterparty, though. Sad, but true. Too much wine, rich food, networking, moving, and shaking. Not too shabby a weekend, though, even by New Orleans standards.
Posted by Nora at 10:00 AM