Not too long ago, I got a press release from one of the local PR firms that I've worked with about the new cocktail guru and list at Grand Isle.

Direct from San Francisco’s “Best Neighborhood Bar,” mixologist Eric Dahm has over 10 years’ experience in custom cocktail making and has created a line of craft cocktails that follow the long legacy of New Orleans libations. Eric’s new bar menu blends his California bar philosophy with a more visible marriage between the bar and kitchen programs. Just like Chef Mark Falgoust of Grand Isle, Eric focuses on in-house production and local sourcing: using fresh ingredients and in-house touches that are changing up the way the restaurant approaches drink making! All of the new specialty cocktails range between $9 - $12, however during happy hour on Thursday’s, all of the “specialty cocktails” are ½ off from 4-7 p.m.

After our FESTIVales beer crawl in the Warehouse District, I got a chance to meet Eric when dining at Grand Isle and sample one of his cocktails, the Spa Collins, which is a collins cocktail (served over ice with club soda) with Hendrick’s Gin over ice with fresh lemon and lime juice, ginger, mint, and cucumber. It was damn good and refreshing. 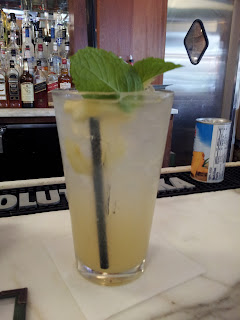 Then we proceeded to order and eat all the oysters! We ordered the "Isle Sampler" which included three of their baked/stuffed oysters: Grand Oysters – Tasso, Havarti, Jalapeno, Oysters Fulton – House Made Bacon, White Cheddar and Caramelized Onions, and Oysters Fourchon – Olive Oil, Bread Crumbs, Parmesan, Lemon, Garlic. We also ordered a half dozen of their smoked then fried oysters. OMG, all the oysters were amazing.

Tom got one of the poboys that had gotten a win at the PoBoy Festival, the Shrimp Caminada poboy with Spicy Citrus Butter with Asian Herb Slaw. I stuck with the oyster theme and got their linguini with parmesan cream sauce and oysters. I thought that Tom's poboy was amazing. My pasta was pretty good, but paled in comparison to our starters and the poboy.

Since I rarely get downtown for eating and drinking, I was happy to have to opportunity to sample a little bit of Grand Isle's menu. FYI, in addition to the Spa Collins, their new cocktail list includes:

Miss Azalea
Sparkling wine and St. Germain in a lavender-laced flute, this Miss is floral, refreshing, and downright bubbly.

GI Martini
Ice-cold Grey Goose Vodka makes a most civilized bed for a just-shucked raw oyster. With a gentle touch of dry vermouth.
Posted by Nora at 1:49 PM