Taking a new look at Byblos

So, I'm on a few PR firms' email lists, probably from being affiliated as media with Hogs For The Cause last year. I get updates about area places and requests to cover stuff in my blog. For the most part, it's stuff I'm not interested in enough to spend the time on. However, I have gotten a few emails from a woman with Bond PR (local PR firm on Magazine Street) regarding Salu and Byblos - two restaurants within a block of each other on Magazine that are owned by the same folks. I'd been to both Salu and Byblos before, and hadn't been too impressed. Everything was fine, but it wasn't anything to really write home about. But Emily spoke so passionately about the changes that were happening with both restaurants' kitchens and overall concepts, I couldn't help it. I was very curious and decided to give them a try.

First up, Byblos for lunch. I met Emily in front of the restaurant's new location where the old Nacho Mama's was next to the Bulldog. The space was more intimate than at the previous location, and the decor was simple but with deep reds and golds that set the stage for our meal. 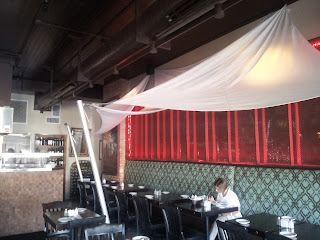 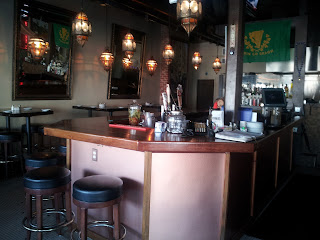 We ordered a little bit of everything, it seemed- the vegetarian platter (with the special request to include a meat stuffed grape leaf alongside the vegetarian one) and one of each kabob they offer. So I was able to get a sense of the traditional dishes as well as their grill work. Also, the Mediterranean hummus which came with feta, olives, roasted red peppers, and general awesomeness.


The hummus was really nice, as was the baba ganoush. I really loved the grape leaves- they were obviously made in house, and were delicate and delicious. Apparently the secret ingredient is pomegranate molasses, which adds a slight sweet element to the spicy and savory. The kabobs were tasty - I enjoyed the shrimp especially. When asked how to cook the beef and lamb, the medium rare request yielded more well done pieces of meat. However, they were still tasty and tender, so I wasn't fussed. Simple, flavorful.

At the end of the meal- still so much uneaten but bellies so full - Emily ordered up her favorite dessert, ashta. It's a traditional custard with a twist - covered with phyllo dough, baked up piping hot, and served drizzled in honey and crushed pistachios. Very satisfying- sweet but not too sweet, with contrasting textures. 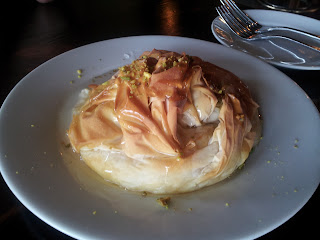 I'd like to return to really delve into the menu more, but I'm glad I had the opportunity to start out with the standards and basics. The vegetarian platter and the kabobs gave the opportunity for the ingredients to shine - the flavor profiles of Mediterranean cuisine were well represented here.

If it's been a while since you stopped by Byblos, I encourage you to give it another try. The space is much more welcoming and comfortable, and the food is really great.  Also, they have a pretty decent draft beer list, which I go into in more detail on my other blog.
Posted by Nora at 5:55 PM