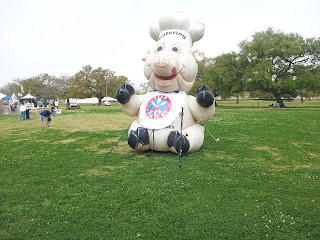 WHOSE CUISINE WILL REIGN SUPREME?

Last year I had a terrific time attending Hogs For the Cause as a member of the media. When I emailed about getting a media pass this year, I got an application to be a judge! Very super awesome and cool, and I hope that I can be one again next year. 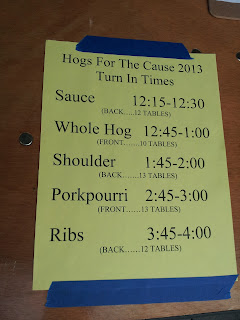 Judges were requested to check in to the judges' tent at noon (it was the same tent that held the gala, so I knew where to go.) Upon arriving, I saw one of my favorite bbq purveyors, Neil McClure. I guess he had planned to be out of town this weekend, so he didn't enter to compete, but asked to judge when his plans changed. I also saw Max Ortiz and Chef Phillip Lopez from Root. The judging coordinator, Melzie, called us to attention and let us know the scale we'd be judging on (from 5-10, ranging from no sample provided at 5 to wanna have seconds 10), let us know that each table would have a certified judging expert, and sent us out to the holding tent to get ready.

While waiting, I introduced myself to Chef Adolfo Garcia and Poppy Tooker. The editor of Louisina Cookin' magazine stuck up a conversation. For the first round, I sat with Chef Lopez and Judy Walker (from the Times-Picayune) and we did BBQ sauce. It's tricky, really, judging sauce without any other context. We figured out the intricacies of comparative scoring and started to get the hang of it. 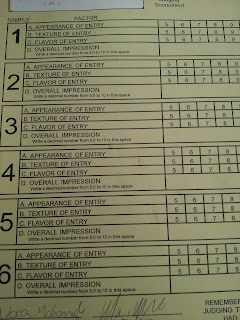 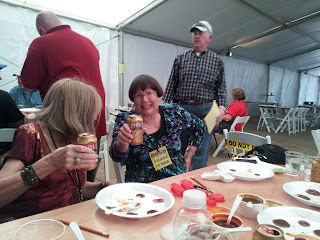 After that, we moved to Whole Hog, which was challenging because it involved several cuts of the pig. 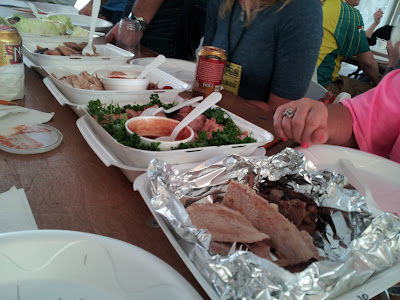 Our expert was really helpful at sharing ways to judge criteria and how you can tell if something was overcooked or cooked improperly. Or the opposite, if it was cooked well with a good technique.

Between judging rounds, I spoke to Chef Garcia about craft beer in restaurants - very interesting!

Next up was the pork shoulder, most commonly used for pulled pork. For this round I was with the same BBQ judging expert from the previous round and Chef Tariq Hanna, owner of Sucre. There was one pulled pork that was just head and shoulders (uh, so to speak) above the others. I dearly hope they placed.

OK, I may have had too much sampling because going into the 4th round, I was getting full, and a bit apprehensive about the category - Porkpourri. It didn't help that one of my fellow judges (local food writer Robert Peyton) had done that category last year (in a different format, so he had a lot more than 6 samples to try) and said that while some entries were great, many were... not so much. But! I was sitting with a couple other local writers/bloggers, Mary Ehret (Local Palate) and the He Said (aka Steve Smith) from He Said She Said blog, in addition to Robert, veteran blogger and Porkpourri judge. So we chatted about writing and eating while we awaited all the various porkpourri to be delivered to our table. We ended up with: a cast iron seared pork meatball poboy with a pork belly sauce, a sticky pig tail, fried and coated with sauce, a pickled pork tongue and crispy pig ear bao, a red curry ground pork taco, and a pork belly yakatori with crispy kale.


We actually enjoyed all our items, but my personal favorite was the bao. It was amaaaazing. The poboy was right behind it.  On a related tangent, some competitors were serious about presentation - this box was delivered to the table next to us: 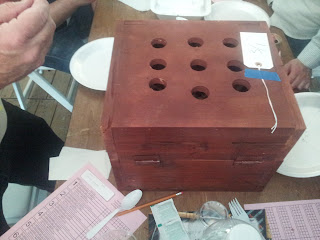 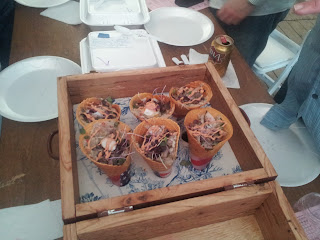 I don't know what the verdict on its taste was, but we were all gathered around taking pictures and listening to the elaborate accompanying story.

I am ashamed to say, I couldn't hang for the last round of judging ribs. I was just so full and uncomfortable I had to leave. I was punished for my weakness as well, since the Grand Champion of the competition came from the ribs category and had chefs I knew! (including Nathanial Zimet and Bart Bell.) Ah, well. Next year, I'll be better at pacing myself, if I'm lucky enough to be asked to return.

You can check out the Hogs For The Cause website for the winning results. Also, Judy Walker, my co-judge for the first round of judging - BBQ sauce - did a great overview of the event and recipes and judges' quotes and everything. The one about geometry I was present for - Joe was judging with both of us during that category.

In conclusion: even though I felt like I would explode at the end of it, the important thing is that I didn't. But I DID meet lots of awesome food people, learned a lot, had fun, and ate delicious pork all day. One of my best days ever!
Posted by Nora at 10:30 AM