I've been working to find affordable but still delicious food when eating out. We are trying to cook more, but some days it's tough to find the time or energy for it, and I never bring my lunch to work, so every weekday I'm on the prowl. Obviously, that all adds up, so I try to limit the daily expenditures as much as I can without sacrificing awesomeness.

To that end, a quick update on cheap awesome eats!

Wednesday for lunch I went and checked out a new teriyaki place called Kobe Teriyaki. I read about it in the Gambit, which I advise you to do for more information. It's on Earhart Blvd right off S. Carrollton. I had the beef rice bowl, which came with pickled ginger and was satisfying in every way. 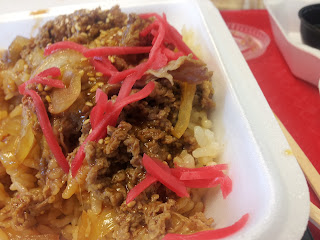 Today, it being Lent and all, was Fish Fry-day (see what I did there.) Again, the Gambit clued me in that several of the local chefs who competed (and won, in many cases) on the Food Network TV show, "Chopped" as well as other local chefs would be spearheading a fish fry to support Lantern Light Ministries which runs the Rebuild Center at St. Joseph's Church on Gravier and Derbigny. There goal was to sell 1,200 plates of fried fish, mac & cheese, corn salad, bananas foster bread pudding, served with French bread and a cold drink! $10. Tom and I met shortly after noon in front of the Center/Church and stood in a long lunch-rush line (which moved pretty quickly) to get our plates. Delicious food- FOR CHARITY. Many levels of awesomeness at work here. 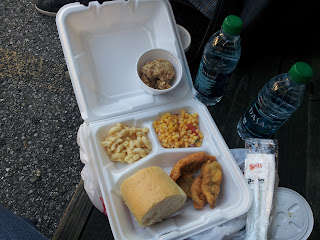 Last night we had a cheap dinner date at the Milk Bar right off Prytania across from Touro. (here's another Gambit article by Mr. Ian McNulty) They do sandwiches (on amazing ciabatta bread toasted up with melty cheese), salads, and soups. Also- MILKSHAKES. I got the "Wolf me Down" with roasted lamb and spinach and a super chocolatey milkshake. Tom got the Psycho Chicken, which had pesto, olives, and roasted red peppers. Everything was awesome.  (we'd come starving and in need of carby cheesy sustenance, having spent a few hours at a couple of the neighboring bars.) 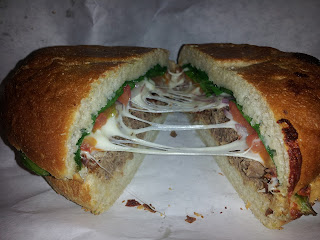 SPEAKING OF CHEAP AND AMAZING FOOD: You all have heard that Noodles & Pie will be opening a permanent location in the old Reginelli's on Magazine and State? Hopefully by mid-May? OMG, I cannot wait. More info to be found here.
Posted by Nora at 4:05 PM