My parents have finally figured out that the best present they can get for me/us is a gift card to a local restaurant. We got one for Commander's Palace for Christmas last year and decided to get gussied up for our 8th wedding anniversary last week and have a special occasion dinner there.

As far as celebrating special occasions goes, Commander's Palace is an excellent choice- as far as dinner is concerned, for sure. Daytime meals are still great (I prefer lunch to the craziness of their weekend brunch) but for a Friday night dinner, nothing says class like valet parking, being greeted personally by the maitre'd, and sat promptly in the downstairs main dining room. The chef was often at the table next to us, and I later discovered that it was because Ella and Dottie Brennan were sitting there with a couple of friends! They are (especially Ella) the matriarchs of Commander's Palace, and ran it for years. This is a pretty cool article about Ella and her life and culinary influence here in New Orleans. So, that was awesome! I didn't know about it until much later in the meal (after the ladies left), but I had assumed they were friends of the Brennan family- and then learned they WERE the family.

Being seated next to Ms. Ella's favorite table was indeed an honor, and the staff treated us like old friends and important guests.

On to the meal! I started with their take on the French 75, called the Saint 75, which had the usual sparkling wine and gin, as well as St. Germaine and basil syrup. Very delicious and refreshing. Tom had their classic lime daiquiri. One thing about Commander's Palace is that they let you settle in for a while, serve you cocktails and garlic bread, before handing you the menu. It was nice. Once we did get the menu, our waiter's impassioned recommendation for the tasting menu- listed as "Chef Tory's Playground" won us over (um, as well as the delicious descriptions of the courses.) I opted for the wine pairing; Tom did not, though he did enjoy a few glasses of different Pinot Noirs as well as the Barolo Riserva that was paired with the beef course. CP has a pretty expansive and diverse wine by the glass list, and they also sell the by the half glass, which is nice for trying different wines, as Tom did.

First course: Hog's Head Cheese Stuffed Pork Cracklin'
A terrine of Berkshire pork with Creole trinity, pickled peppers, parsnips, mushrooms, and mango-habenero mustard. Wine pairing: 2007 Commander's Palace Cuvee, Brut Blanc de Noirs, Russian River Valley.
This was terrific, although the pork that was stuffed inside the cracklin seemed more like a pulled bbq pork than a hog's head cheese? It was delicious though- the sourness of the pickle and the heat of the mustard really woke up the palate without overwhelming the pork. I found out that the CP Cuvee was made for them out of the Iron Horse vineyards.

Second course: Maine Lobster and Squash Blossom Relleno
A cracklin' covered squash blossom stuffed with poached lobster knuckles, butternut squash, Creole cream cheese, and charred chiles over smoked jalapeno crema.  Wine pairing: 2009 Patrick Piuze Terroir de Chichee Chablis, Burgundy France.
This was just stupid delicious. The lobster knuckles (already known to us as the best part of the lobster) were not actually stuffed in the squash, but surrounded it. Again, a bit of a kick to even out the lusciousness of the lobster and the Creole cream cheese, and extremely assertive flavor profiles.  Great time for the palate cleanser!

Why, the palate cleanser is no other than my much-enjoyed cocktail from the start of the meal, the Saint 75! (St. Germaine Elderflower liquer, Bombay Sapphire gin, crushed citrus, and basil syrup) Using this as a palate cleanser (or, as they call it, "le Coup de Milieu") was pretty genius, the herbaciousness of the basil and the elderflower really balanced out the strong flavors of the previous courses, and the bubbles in the sparkling wine sort of gently scrubbed the tongue clean.

Third (fourth?) course: "The Five Hour Egg"
A gently coddled egg cooked in the shell at 141 degrees served with a sautee of late harvest mushrooms, caramelized shallots, and toasted garlic with crisp potato, brown butter vinaigrette, and a splash of truffle oil. Wine pairing: 2008 Domaine de Closel, Chateau des Vaults, la Jalousie, Savennieres, France.
There was a bit of delay in getting this course, our waiter joked that for us, it would be the "Six Hour Egg." But it was well worth the wait. Although I didn't see any crisp potato in the action, it was freaking amazing, as a beautifully cooked egg can be. Lawd, that was so rich and decadent.

Fourth course: Creekstone Farms Black Angus Beef Tournedo
Hand-carved beef tenderloin over red quinoa, hearty greens, autumn mushrooms, and roasted roots with sage and green peppercorn demi glace. Wine pairing:  Rocche Dei Manzoni Barolo Vigna D'la Roul.
Now, neither Tom or I are big filet/tenderloin fans. I find the flavor to be lacking and prefer cuts like the ribeye or the hanger. However, I am not exaggerating, we both found this piece of beef a freaking revelation. The flavor was so good, and it was so tender, it practically melted in your mouth. It wasn't the demi glace or the sides that perked it up, it was the beef itself. I don't know WHAT Chef Tory did to make it so breathtakingly flavorful and delicious, but DAMN.

Fifth Course: A Selection of Artisinal Cheese
Pecan biscotti, seasonal fruit, and red wine syrup. Wine pairing: 2010 Naufragar Malvasia di Casorzo.
The cheeses were great. There was a blue cheese, a non-blue stinky cheese, and a mild, firmer cheese. The accompaniments were fantastic and the wine was a bit heavier and sweeter than I'm used to, but still complex and enjoyable.

After the bill was settled and our photo opp taken (see below), our waiter informed us of our famous next table neighbors and seemed satisfied with our appreciation of it. When I asked our waiter if I could keep a copy of the menu so I could refer to it in the future, he asked if I'd like the chef to sign it. Which... OK! 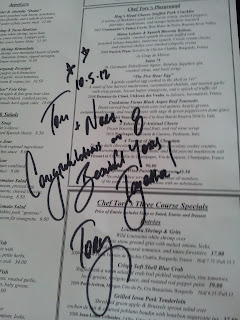 So that was pretty exciting, going into the kitchen and talking with Chef Tory. Then he (our waiter) took us to the back garden area which is also behind the Brennen ladies' home and told us that one could always take a cocktail here (they don't have a bar area, so this information was definitely relevant to my interests.)

Picked up our car from the valet and went home. The tasting menu portions were perfect- after all those courses, we just had happy bellies, not painfully full.

THAT'S how you celebrate a special occasion! (preferably partly subsidized by someone else's generosity).