Getting my San Francisco on!

I was able to score a sweet deal on a direct flight to San Francisco last weekend, and I jumped on the opportunity. I love, love, love San Francisco and several people in it, so I felt like my soul needed a little Northern California rejuvenation.

Saturday night when I arrived, I was met at the airport by my friend Lee who would be my host for the weekend. We decided to hang out in her neighborhood south of San Francisco proper - Redwood City. We went to Martin West for some beers and snacks, and then out for sushi!

The next morning, we got up and had brunch at Alana's in Redwood City with friends of the family. It was a lovely morning and we sat in the courtyard: 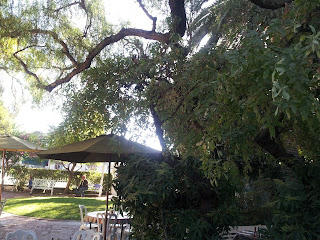 After brunch, Lee and I hotfooted it over the the Caltrain station in Redwood City. Now, to explain the craziness of the day in San Francisco: it was Fleet Week, the Niners were playing, the Giants and the A's had playoff games, the Castro Street Fair was going on, and also some kind of bluegrass festival. San Francisco was teeming, but that's fine with me. We took the Caltrain to the Millbrae BART station and took the BART to downtown, to the Embarcadero, which is the stop closest to one of my favorite places in San Francisco, the Ferry Building.


So, we took a wander down the pier to meet another friend at Pier 23. Beautiful, beautiful bay views.


Finally, we reached Pier 23, which was crowded with folks there for all the reasons listed above, plus, as we soon found out, the restaurant was a prime place to see the Blue Angels doing their thing, which was wild! We ate and drank then my friend Juliana took me up to her neighborhood, North Beach. We stopped in this awesome dive bar, reputedly the oldest bar in San Francisco, The Saloon. This place was a trip! Dark, crowded, cheap beer, great music, dancing, great vibe. We did our obligatory shot of Fernet there and danced up a storm. So, so very fun. Checked out a bar called Tupelo before hitting a bar called the Boardroom, which had delicious beer AND bacon wrapped tater tots, which I devoured. Took the BART back to Millbrae, and my friend Lee picked me up AND TOOK ME TO MY VERY FIRST IN-N-OUT. I had a double-double, "animal style." BLISS.

Monday, Lee had to work, so I packed my stuff up and headed back into town to spend the day before heading back home (my flight was leaving at 4:30pm.) I did the same Caltrain-BART trip, but got off at Civic Center and walked a few blocks to meet my friend Sylvie at the new location of Dottie's True Blue Cafe, the best breakfast place pretty much ever, anywhere.


Full of amazingly delicious breakfast, we wandered to the nearby Blue Bottle Coffee shop. Blue Bottle is DEADLY SERIOUS about coffee. Read their website for an eyeroll. But, OMG, their coffee is delicious. They also do some crazy special preparation that involves beakers and flame?  I just got a latte.


Sensing my weariness, Sylvie put me on a bus (I'm just not used to those hills!) I took the Geary to the Fillmore and got off at Haight Street to visit my beloved Toronado beer bar.

I will be going into much greater detail about the Toronado (and my other beers enjoyed during this trip) on my beer blog. That should be going up soon.

All in all, it was a wonderful, whirlwind trip that satisfied many longings. I love the Bay Area so very much and hope to get back there soon. It had been three years since my previous visit, which is much too long! The old Mark Twain quote is: “In America, there is New York, San Francisco and New Orleans and everywhere else is Cleveland.” I bring this up not to insult other cities, but to note that my love for both San Francisco and New Orleans is significant. Both cities feel like home to me. And San Francisco is the only place that matches up to New Orleans, food-wise, booze-wise, and culture-wise, in my experience (note: I have VERY little experience of NYC, haven't been there for 20 years.) I just can't get enough.
Posted by Nora at 3:13 PM