A quite delicious day

So, around 11:30 or so, the following pops up on my Twitter feed from Cowbell:

I think to myself, I could get there! It's just down Claiborne to Oak, and would put me in easy position for doing my work and lunchtime errands. It's a gorgeous day, perfect for doing something a little different. So off I went to Cowbell. Sat at the counter, enjoyed the ambiance, ordered an Arnold Palmer and my rabbit pate and brie grilled cheese sandwich. The cup-o-soup I ordered was a sweet potato, corn, and shrimp chowder which was pretty awesome, as was the sandwich. Could have been too rich, but it wasn't. It just made me so happy! Cowbell's an awesome place, where I ought to go more frequently. Used to get my burger fix there before I found perfection at the Company Burger. The also have the only clam chowder in the state (probably.) It's great- food is fantastic, vibe is chill, service is super friendly.


So that put me in a most excellent mood. I declined dessert, having learned my lesson the previous day at Crescent Pie & Sausage, where after I ordered their soup (turkey & andouille gumbo) sandwich (house smoked turkey club) and salad, I ordered their chocolate pumpkin bread which was so good (came with ginger ice cream!) but TOO TOO MUCH.


Don't think I wasn't tempted, though- I've had Cowbell's apple pie before and it is fantastic.

So after that I had a lovely drive uptown, from the River Road to the Riverbend, down St. Charles, and over to Magazine. It was a gorgeous October afternoon, I had my windows down and was listening to the streetcars go on their way. Passing Tulane, Loyola, Audubon Park. It's the New Orleans that the Tourist Board dreams of. And, wow, the weather is so beautiful in October.

That got me back to the office with a spring in my step, and after working through the afternoon, met up with Tom downtown and he'd heard of this empanada-serving food truck called Empanada Intifada that was supposed to be pretty good. (was also recommended by a Venezuelan friend, so.) It was supposed to be parked outside of 45 Tchoup by 6pm and there it was after we battled traffic for a half hour to get there from downtown.

So we both got 2 empanadas- both of us got the Mestizo Meat Pie, described as "Our fusion of the traditional empanada with the traditional meat pie: Argentine Mendoza empanada (Angus beef, onions, eggs, potatoes, and olives) meets the celery, green peppers and green onions of Louisiana's Natchitoches Meat Pie." Tom got the black bean empanada (Cuban-style black beans cooked in citrus with fried plantain and coconut Jazzmen rice) for his second and I got the Hobo Pollo Adobo (Filipino-style pulled chicken marinated in soy sauce and rice vinegar, with tomatoes, green onion, Jazzmen rice and potatoes.) I also ordered the red beans and rice, because, why not?

It was all excellent. The meat pie had a bit more texture than the bean and the chicken empanadas, but all were incredibly flavorful and wrapped up in delicious dough. It don't get much better than that. Also, our meal combined, with tip, was $20. It REALLY don't get much better than that. The purple stuff was Curtido Cabbage Salad, described on their website as the ultimate Salvadoran palate cleanser, fresh chopped cabbage and carrots rubbed down with citrus, vinegars, whole cumin seeds and oregano. Went GREAT with the red beans too. I really liked all the food. Comforting, delicious, well made, great ingredients, just really happy making.

We got our food, went inside the bar and sat and ate and drank beers. They had NOLA Brewing's Hopitoulas and Blonde Ale, as well as LA 31, Canebrake, and Tin Roof. The bartender was very sweet and friendly, and we watched the Yankees lose the ALCS. Oh, funny thing- 45 Tchoup is New Orleans' Red Sox home away from home, so folks there were THRILLED to see Detroit win the series. Yankees suck! (just kidding, I really don't care, it's just something I'm very used to.) 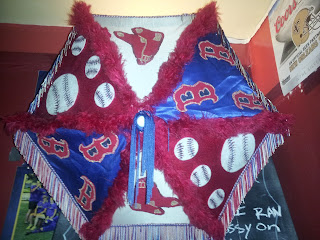