While on vacation last week on the relatively quiet and sleepy shores of Florida's "Forgotten Coast," the majority of our shopping had to do with sandwiches. Cold cuts and condiments. PB & J. Grilled cheese. Fried egg. Sandwiches bring me back to my own childhood vacations- meals are much less formal than at home, you make a sandwich when you're hungry, maybe while reading a book or after taking a nap. You bring sandwiches down to the beach with you so you don't have to leave the sound of the tide coming in to go get lunch.

I LOVE sandwiches, to the point that I made Tom giggle at my undisguised glee about sandwiches for dinner on vacation. In "real life" I have vegetables from the local farm to use up, recipes I want to try, and an enormous variety of amazing food to go out and eat. (all usually in non-sandwich formats!) New Orleans also loves its sandwiches- the poboy, the muffeletta - so I know how to fill those cravings when they hit. In addition to the traditional places, we often enjoy a nice deli classic from Stein's as well. Sandwiches are well represented here- huzzah!

Today, we went to lunch at a place not even known for its sandwiches- it's the Neapolitan pizza restaurant on Freret Street, Ancora. Due to their very specific process with the pizza dough preparation, they can't serve pizza during their Friday and Saturday lunch service (the only days they are open for lunch.) However, they serve a small menu of amazing sandwiches with their house cured meats, amazing cheeses, and fresh baked bread. Their menu when we were there consisted of a BLT (with house made bacon, arugula, and heirloom tomatoes), a muffeletta with coppa and kalamata olive salad, a croque monsieur with prosciutto, provolone, and bechamel sauce, and a ricotta cheese and strawberry jam sandwich. Also offered: a peach and culatello arugula salad.

We decided to start with and share the peach salad. It was as delicately delicious as it was beautiful. 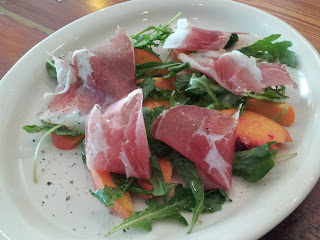 I chose the kalamats muffeletta and Tom decided on the Croque Monsieur. 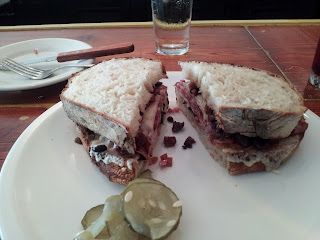 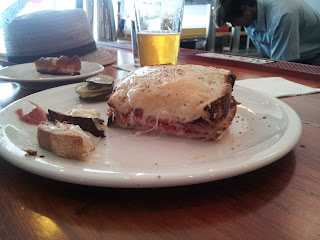 Both excellent- the intense flavors sated us with a mere half a sandwich each, and we just had the other halves for breakfast (paired with an imperial IPA to cut the richness of the meat and cheese with some bitterness, and to stand up to the bold flavors.)

Speaking of, and I know this isn't my beer blog, but Ancora has a nice selection of beers on draft in addition to its cocktails and wine. 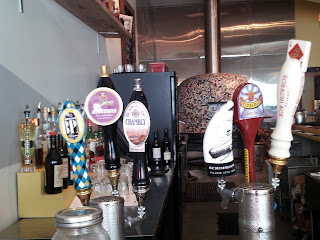 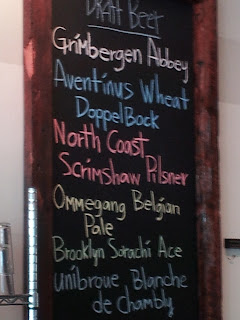 As we left, I saw this bowl of tomatoes that made me wish it had been possible to also order the BLT:

While we were enjoying our sandwiches, at least 4 parties walked in and walked out when told that they weren't serving pizza. I hope that Ancora can put the word out framed more postively about their Friday and Saturday lunches and bring people in who are craving their sandwiches, with house cured salumi, high quality cheese and vegetables, and amazing bread. The chef came out while we were eating our sandwiches to see how we were enjoying them, and confided that although pizza was of course the main game at Ancora, nothing made him happier than baking bread. He was right to take pride in that work- his bread was excellent- solid enough to stand up to sandwich filling, while still having a fine and tender chew. Also, great tasting.

Prices were reasonable, the sandwiches were $10 for a very large portion of obviously excellent ingredients. Beer is expensive- $7 a pint! But all I know is that Ancora lunch service has definitely made my list of craveable sandwiches in this city where the sandwich is king.
Posted by Nora at 2:19 PM