So, although I maintain my other blog for beer related business and put everything else here, it's getting harder to keep the 2 blogs from overlapping. I do a lot of discussion of food and cocktails here (as well as other New Orleans stuff), and recently I've been doing more exploration of beer in the fine dining world and I honestly don't know where to put it, either here or there. I guess I'll keep all beer related stuff over on the beer blog and occasionally post links here for anyone who may be interested. But I recommend checking out the NOLA Beer Bitch blog from time to time (or regularly) if you're not doing so already! Beer stuff is starting to take up a majority of my time and energy, so.

That said, I recently attended a Tales of the Cocktail Spirited Dinner at Coquette, called Swigs & Pigs. Every course had a different pig/pork element, and the cocktails were made with various beers as well as spirits. You can read my liveblogging of the dinner here. It will show up most recent first, so unless you skip ahead to the first entry and go backwards, you'll be reading it in reverse order of the courses (I blogged course by course.)

In other high falutin' beer bizness, you may recall my being quoted by the Times-Pic by Todd Price regarding fine dining and beer. The other main entity in that article was one of the managers of Root, talking about Root's beer program. Following the publication of the article, the guys from Root - Nick and Max - and I sat down and talked about their beer program and how to expand/improve it and how to get the word out about it (they also have an excellent cocktail menu and wine selection which tends to overshadow the beer, an issue also faced by Coquette.) Several weeks later, Nick contacted me about Root's plans to host 2 beer dinners in August - August 13 and 27 - and they invited me to choose the beers to accompany the food! So that was super exciting. Tom and I went over there on Monday evening and went through the menu and tried various beers that were on their list, and came up with some pretty good pairings, I think. I learned A LOT just in that dinner about beer pairing. I am so grateful for the folks at Root to give us that opportunity, as well as a free pass to access all the amazing beers that we thought would work! Also, the staff was incredible.

So, we have the pairings for August 13 all set AND it's gonna be awesome AND here's the menu and pairings and info!!

In news that is more on the geek side of beer geek, we attended the Krewe of Chewbacchus' annual kickoff event/fundraiser, Alien Beach Party at Tipitina's. It was pretty fun- lots of great costumes, geeks kicking back and having geek fun, the Local Skank, a trivia contest that we kicked ass at, and a feud between the strict sci-fi fans and the fantasy fans. (read here for a better explanation of the silliness) It turned out that it was time to unite, though. Some of the signs from the The Mystic Krewe of People for the inclusion of Unicorns, Elves and Whinebots in Chewbacchus (PUEWC - pronounced like “puke”) protest: 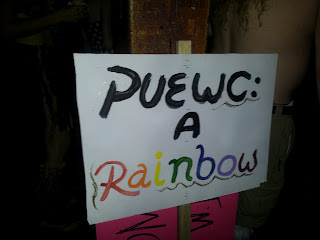 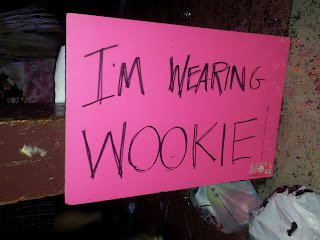 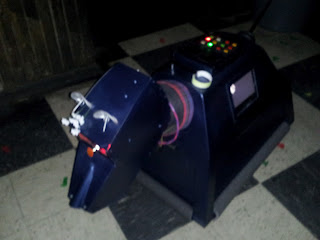 And here's a couple live action shots of the Local Skank, the headlining performers, and how I talked Tom into going- dressed as Princess Leia, Leela from Futurama (with brain slug!!), and I think a Sailor Moon type character? 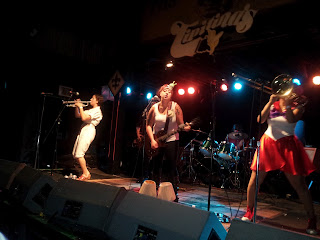 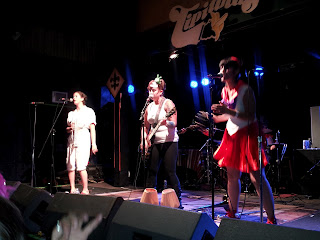 Aaaand, here's a picture of a Stormtrooper playing bass. Just because: 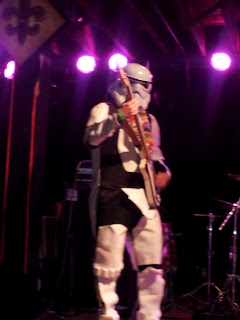 That's about it for now- it's been pretty rainy and wild weather, and hot as hell in between storms, so as we enter the dog days of summer, things are pretty quiet. But! White Linen Night, Dirty Linen, and Satchmo Fest are all coming up in August, as well as the Root Beer dinners.

And of course, the best summertime activity: Hansen's Sno-Bliz for dinner. (which we totally did last week.)