So, we've been trying to get out and about lately. Summertime in New Orleans- hot, sweaty, and lots of stuff going on for the locals. A couple Fridays ago, we biked down to Tipitina's for Free Foundation Friday featuring the Local Skank. Fun times! Dancing, sweating, dancing some more. Even saw Tom do some rump-shaking. It's a fun show. 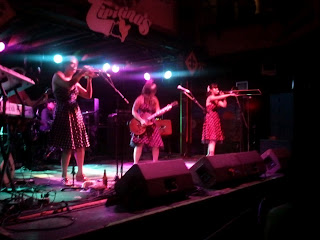 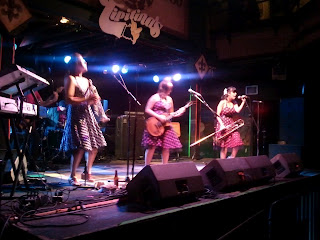 The next weekend (this one just past) we had a nice relaxing time. We had a lovely dinner at the bar at Coquette- they had a smoked drum dish that came on that sounded like it was made for Tom, so we strolled over there and had a nice time.

Jeff behind the bar mixed me up a drink he's been working on, in the spirit of a summertime negroni. Gin, verbana liqueur, and... something else. It was tasty! Tom had their beer and a shot which was North Coast's Red Seal Ale and Becherovka, which Tom has called the next Fernet.

Sunday we started at the High Hat due to my newfound awareness of their weekend breakfast special, biscuits and gravy. So I had that, and Tom had his usual buttermilk cornmeal pancakes. 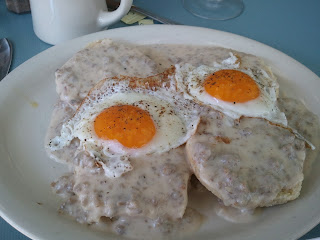 We also found the Brigade Coffee Truck set up in the parking lot next to the Company Burger and had a couple iced lattes. Yum. 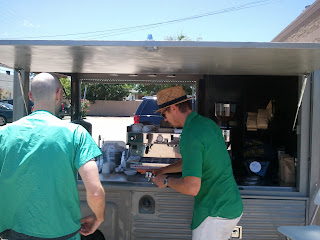 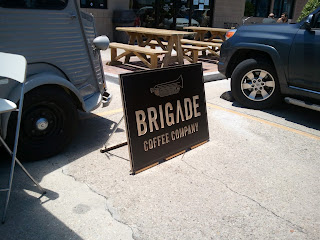 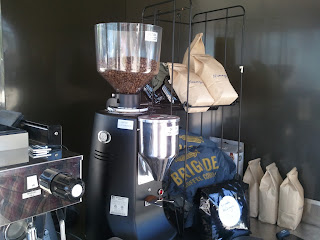 Afterward, we went to the French Market downtown to see Jeff "Beachbum Berry" who is one of the country's preeminant tiki cocktail masters. He was doing a preview of sorts of his lecture the following day on Joe Scialom, who Berry calls the "International Barman of Mystery." He gave a brief overview of Joe and also mixed up a variation of Joe's invention, the Suffering Bastard, called the Dead Bastard. It has gin, cognac, bourbon, rum, ginger beer, and Angostura bitters. Swizzled it up in a punch bowl and garnished with orange slices and mint. 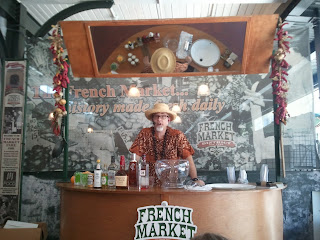 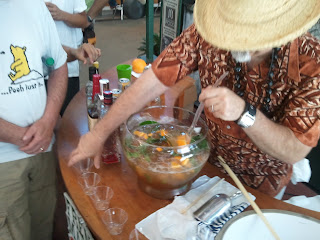 Side note: I was chatting with Berry and another couple who was helping him set up and we got to talking about local cocktail bars. I was opining on a few things discovered that not only was I talking cocktails with Beachbum Berry, but also Chris McMillian.

Then of course we went to the Museum of the American Cocktail  on Monday to see the full lecture complete with samples of three of Bartender Joe's cocktails. While we waited, we had the Kiliki Cooler: 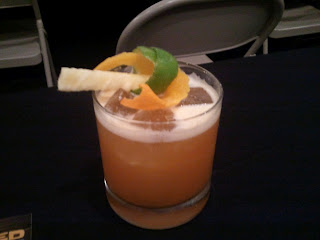 As we listened to the lecture, we had samples of two others: The Suffering Bastard and The Plymouth Julietta. Yum! 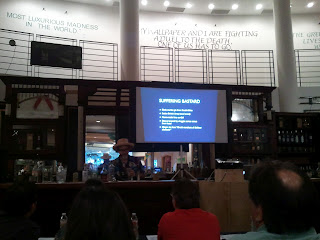 So, delicious adventures were had! Tuesday we went to the Coquette fried chicken and beer dinner... but that's another blog post.
Posted by Nora at 10:09 PM