June is New Orleans' month for the Eat Local Challenge, and we joined up (only a week or so late) while at the  OCH Market. We went there to track down some TSAI food, and were greeted by... a duck. 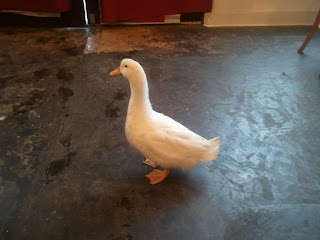 Also, some chickens, but they ran too fast for me to get a decent pictures. Mostly running away from the kids chasing them, it appeared. 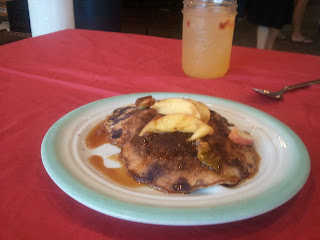 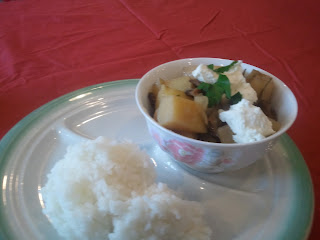 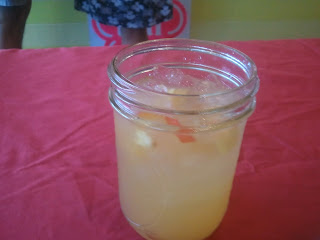 So, after eating our food and dodging frenzied fowl, we signed up officially for the Eat Local Food Challenge, and got some Louisiana wheat flour and Louisiana salt. Also met up with a new meat purveyor, Cleaver & Co., which is a fully locally sourced butcher shop that I am super excited about. They'll be opening a permanent location soon on Baronne Street near our friendly neighborhood homebrew store, Brewstock! So I chatted with them for a while, bought some pork country-style ribs, dazzled them with my highly popular blogging lifestyle and wandered off to shop at the vegan lady's table. Got some tofu and pecan milk. Tom bought locally sourced jam and bread, and we left pretty damn satisfied with ourselves.

After a quick stop home to put away all our local food, we drove downtown to check out the simultaneous festivals going on in the French Market and U.S. Mint Building: the Creole Tomato Festival and the Cajun Zydeco Festival. 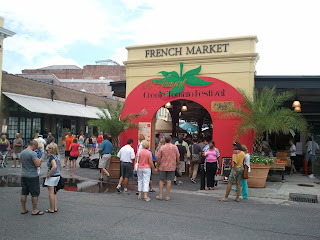 We wandered, listened to music, ate amazing Creole tomatoes with lump crabmeat and remoulade and some awesome crawfish bread that was much better than the stuff at Jazz Fest, listened to music, drank some NOLA Brewing beers, enjoyed the cool breeze coming off the Mississippi, and generally had ourselves a real nice time. We'd parked up on North Rampart near Bar Tonique, so we stopped in and had a couple cocktails before going home. I had a Pimms Cup and then a delicious gin gimlet variation, and Tom had probably the best Dark & Stormy I've ever come across and then a Mai Tai.

Today, I wanted to see how Coquette's brunch was since they started it up again. It's been the only somewhat weak spot in the times we've been there (before the hiatus) which was heartbreaking, because I know how amazing it usually is. Happily, I can report that we had a pretty perfect brunch experience. Great service, great food... I saw Chef Stoltzfus coming out of the kitchen as we were wrapping up, which was impressive, given that usually executive chefs don't do brunch service (to my understanding,) Now there's some dedication to brunch service, usually the most hated service of the week by industry folks. The commitment showed in a really excellent meal.

They are doing the 3 courses for $30 exclusively now (with a couple sides available) so I ordered the gumbo, the hangar steak & eggs, and the lemon tart with basil meringue and blueberries. Tom had the local vegetable salad with candied pecans and goat cheese, the eggs benedict (made with country ham and in house baked english muffins), and the sourdough waffle with peaches and cream and assorted awesomeness. 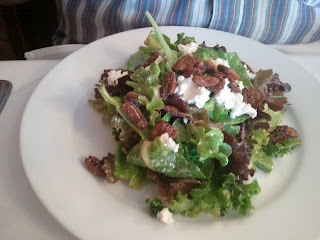 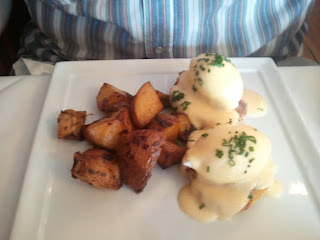 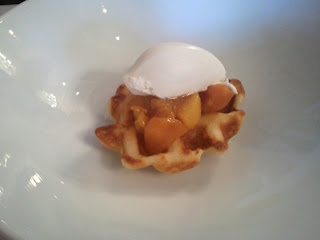 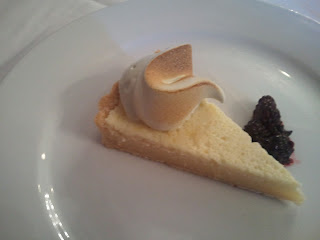 Along with some of their french press coffee, their amazing bread, and a cocktail called The Lady Or The Tiger, we had a wonderful time. When Chef saw us, he came over and said a quick hello, but also sent out a little sample from their new dessert sampler they've been running: 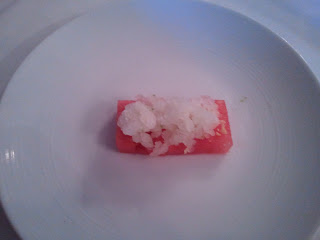 He described it as "sparkling watermelon" topped with lime granita. The sparkles came from unflavored pop rocks, which made eating this refreshing bit of cool fruit an adventure. Currently, they are serving this with variations of "ants on a log" and "cherry bomb". Seems in keeping with the playfulness of the new dessert kitchen staff. That's what I've been discovering in our recent forays to Coquette. It's FUN. The food is wonderful, the ambiance is gorgeous, they take their cocktail, beer, and wine programs very seriously, but they are having fun and want the customers to have fun too.

Apparently there is some sort of fried chicken and beer dinner happening there later this month- I recommend strongly that you follow Coquette on Twitter (@coquettenola) to get more details on that as they unfold.

After such a decadent brunch, we headed out to Hollygrove Market (now open on Sundays, hooray!) to pick up some local produce, with which we enjoyed a simple but tasty stir fry much later for dinner with the locally made tofu, purple cabbage, green pepper, and japanese eggplant. (Tom called it a Mardi Gras stir fry, with purple, green, and the gold from the pan fried tofu.) Tom also made a crumble with local peaches, blueberries, plums, wheat flour, corn meal, and sugar. It was excellent- ate it up with some blueberry-key lime ice cream Tom made a couple weeks ago.

Here's to continuing to cook, shop, and eat locally! (and yes, going to Coquette was technically cheating. I DON'T CARE!!) (Edited to update: I was just informed on Twitter by the chef that Coquette's brunches are mostly locally sourced, including the potatoes and egg, so hooray!)
Posted by Nora at 11:33 PM