So, between Friday afternoon and Saturday night this weekend, I went to Magasin Cafe on Magazine not once, not twice, but three times. Addicting stuff. Flavorful, fresh, inexpensive Vietnamese comfort food!

I was looking for something quick driving back to my office from home on Friday afternoon. It was close to 1:30, so getting past the lunch rush, and I thought I'd give Magasin a try. I'd heard about it opening a couple weeks earlier, and also heard about it being super popular almost immediately. It ended up being very good timing. I was able to snag a seat at the bar, and my waiter very promptly took my order and brought me iced tea (they had a lot of iced tea going.) I was also intrigued by the strong drip coffee over condensed sweetened milk that they had prepped and ready to go. Next time, I must try that, it looks goooood. 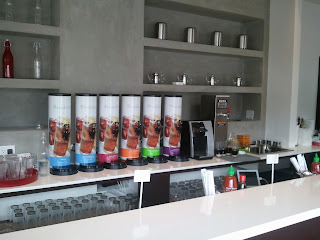 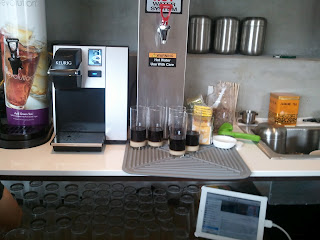 I was a little overwhelmed about what to order, and wasn't sure I wanted to deal with getting soup slopped on my shirt from slurping, so I bypassed the pho and had a vermicelli bowl with grilled pork. 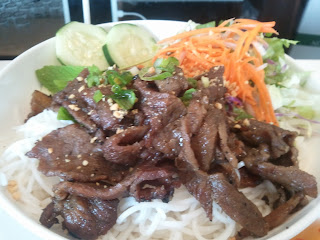 The pork was excellent and the combination with the fresh vegetables and the noodles was nice, with a contrast of textures and a balance of flavors. I also ordered a grilled pork bahn mi (sandwich) to go, and when I carried it to my car I could feel the warmth of the bread through the bag and I wished I had the space in my stomach to eat it right then and there. But I brought it home and split it with Tom and we agreed it was fantastic. Nothing fancy, just delicious pork on fresh french bread (actual french baguette type french bread, not New Orleans style french bread used for poboys) with crisp, lightly pickled vegetables and butter.

I had that bahn mi on my mind when I woke up the next morning and I set out to get to Magasin as soon as they opened their doors on Saturday morning at 11am.  When I got there a little after 11, there was only one other person waiting for a takeout order, but by the time I left 15-20 minutes later, it was already getting busy, including a visit from several NOFD guys.

I placed my order at the register and waited there for my food to be brought out and my order assembled from all the various stations in the place. I brought home: the brisket pho, grilled shrimp cake spring rolls, their "deli special" bahn mi (I asked what it was, and the woman taking my order said "it's various forms of pork" which sounded perfect to me), and a pork bun, because Tom loves pork buns. This one was good too - for some reason the dough was green, but it had a hard boiled egg and delicious chinese sausage stuffed in there in addition to the regular pork filling.

The brisket pho was, like, restorative powers in a bowl with beef. It was so good. They packed up the broth separate from the noodles/meat so that you would combine it at home. They also sent you home with a bag of basil, jalepeno, bean sprouts, and hoisin to do your fixins with. The bahn mi was very different from the one we'd tried the day before, the spices and flavors were intense and mysterious and delicious. The spring rolls were super fresh and the shrimp cake was a warm salty contrast to the vermicelli noodles and vegetables.

The whole meal made us very happy. So much so that when the evening rolled around, and neither of us felt like a) shopping b) cooking c) going out to a restaurant, I called another order in to Magasin shortly after 5pm to be ready for 6pm (when they opened) pickup. I was not the only person with this thought, it seems, as it still took them a while to get my order ready,  Which was fine. Their takeout and cooking staff were working their butts off. For dinner we had: BBQ pork bahn mi and fried garlic tofu bahn mi; shiitake mushroom spring rolls; stir fry noodles with pork. The tofu bahn mi (not surprisingly) paled, flavor-wise, in comparison to the BBQ pork one, but it was still tasty and pleasant to eat.  (everything else in the bahn mi is so fresh and delicious, even with something as low key as tofu in there, it's still lovely.) The pork stirfry noodles were packed up to go much like the pho had been earlier, and I think something got a little lost in the translation when we mixed it together with the broth/oil at home. Still good though- but I think I would like to try it while eating in to see how it's executed there. Spring rolls: still delicious.

Having now had a variety of things on their menu and acquired the food in the three available ways (sit-down, walk-up take out, and phone-in order take out), I can safely say that I look forward to many more meals there. They look like they are reacting to their somewhat unexpected exploding popularity by adding new staff and getting better systems in place- from reading reviews, it seems they hit the ground running and have had to work on the fly.

Running update on The List:
have crossed out: Magasin, Maurepas, and La Petite Grocery
have added: Root