I think that was a major reason for moving here.  That list!  IT MUST BE TAMED! The list continued the first summer we lived here- I wasn't employed yet and was doing lots of exploring. I finally made some progress on my list and eventually stopped consulting it.

However, recently I realized that there were all these new places and also places still on my old list that I needed to pay attention to! So I made a new combined list:

Some of those I don't remember why they are on there- I'm looking at you, Ciro's Cote Sud and Sara's! Some other places are spots that have been around forever/are classics, but I just haven't gotten there yet. Others are new.

I made a reservation for La Petite Grocery for tomorrow night, and decided to leave our cozy enclave to go to Maurepas this past Sunday for late lunch/early dinner. Maurepas is a new place in the Bywater which has been so relentlessly cheerful and friendly and warm and inviting on social media that it actually got me off my ass to go check it out.

I liked it! Well worth the drive from da Channel. Friendly service and overall vibe, tasty plates at reasonable prices. We sat at the bar, as is our wont.


The menu had many interesting looking items, both for food and booze: 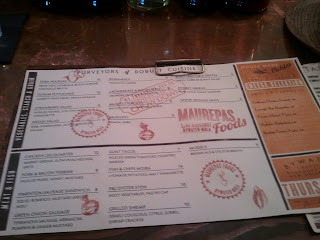 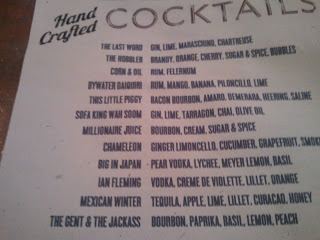 We each had a vegetable-esque starter. I had the brussell sprouts (that had just as much bacon as sprout, I tell you what) and Tom ordered the small pickle plate which included 5 different pickle preparations and arranged beautifully on the plate. 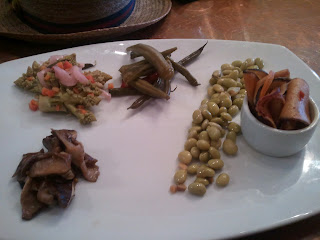 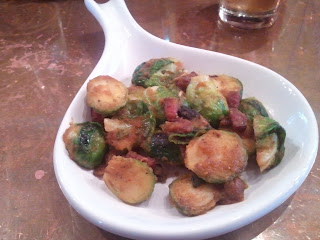 I liked the mushrooms the best on his plate, and I think Tom was partial to the okra/green bean pickle. The other ones were also good- they were just all so different! A great showcase of vegetables and the artistry of pickling (which, if you watch Top Chef this season, seems to be a trendy thing, yes?) My sprouts weren't as purdy, but they were hearty and bacon-y and delicious. There were a lot of them, though!

For our second plates, I had the chicken leg over greens with grits and a slow-poached yard egg. It just had pretty much all my favorite ingredients in one dish, so I had to try it.  Tom had their interpretation of "fish & chips" which was a grilled escolar and lyonnaise potatoes. We were both very pleased with our second courses. Man, I love a chicken leg. 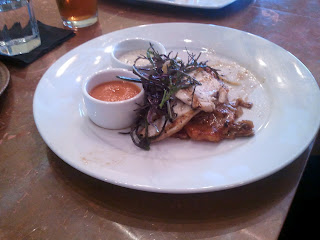 I had heard they had some kick ass desserts, so I made sure to get in on that action. They'd just started a new dessert special, strawberry shortcake, which I was drawn to. The biscuit for the shortcake was delicious- buttery, soft, warm, slightly sweetened. The strawberries were fresh and local, the cream was whipped up by hand, and it was a simple but excellent dessert. I paired it with a second cocktail, the "Millionaire's Milk" which seemed to be their version of brandy milk punch. Again, not too heavy or cloyingly sweet, just a nice glass of something boozy that seemed appropriate to close out a lazy late lunch on a cloudy, chilly, rainy Sunday afternoon/early evening. Tom had the blood orange custard with Italian meringue. Right up his alley.  He ate it up quick and started stealing bites of my shortcake which I was TRYING TO SAVOR, OMG! 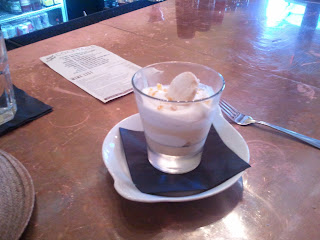 The bartender was super knowledgeable and friendly and we enjoyed talking to her about the food and cocktails.  All in all a very nice time- good food at reasonable prices, not pretentious but definitely having fun with tweaking the classics, and a very comfortable place to enjoy the deliciousness. Would definitely come back and it might become a regular stop for those days we don't feel like cooking- just drive over after collecting Tom in the CBD. I can definitely see that.

Tomorrow- La Petite Grocery! It is CRAZY that we haven't been there. CRAZY. After that, I just need to get on top of getting to these places and checking more places off... The List.