Hogs for the (Delicious) Cause

Was pleased to receive a press conference invitation for the annual local BBQ/pork-centric fundraiser for pediatric brain cancer, Hogs for the Cause. This is their fourth year putting this on, and it's getting bigger and bigger every year. So, this press conference was held at NOLA Brewing right after their brewery tour, so it was like the most festive press conference ever. Got myself a beer and wandered around to take a look at the pork party prep while waiting for the organizers, Rene Louapre and Becker Hall, to announce the entertainment lineup (and other info). 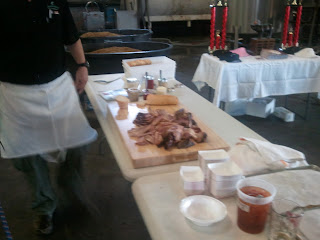 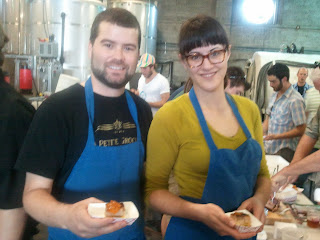 Then the press conference began. We got an overview of the history of Hogs, which you can read about here, but which perfectly encapsulates the way New Orleanians help each other- someone has an idea, usually involving food, drink, and music, and it just takes on a life of its own.  We hear about the 60 teams (spots filled up super fast) signed up to compete in the following categories: ribs, whole hog, butt, porkpourri, grand champion, best booth/presentation, fundraising champion, fan favorite, and best sauce. They've released an app that can be used to navigate the logistics as well as casting votes for fan favorite, which is very cool.

On to the music lineup! 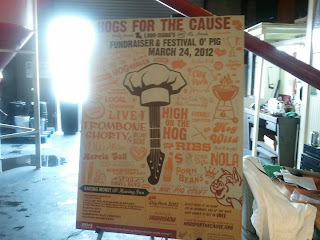 And the subsequent sampling of what was described to me (if I can recall correctly) as "pork belly upside down corn cake with preserved kumquat" (and awesome ham, see above). 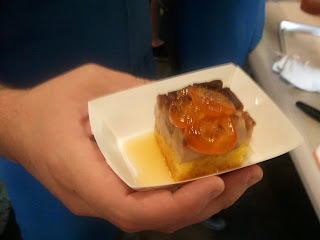 So go get your tickets ($10 before the event and a couple of VIP levels for $100 and $250)! The event's on March 24 in City Park. Also, patronize and thank Hogs for the Cause sponsors, including NOLA Brewing, Capital One Bank, People's Health, Entergy, Acoustic Web Design, Rare Cuts, Gardner Realtors, Renaissance Arts Hotel, kodeless, Thinka, and Champ's Collision Center.

I can't wait- I have made myself ridiculously hungry while typing this.
Posted by Nora at 6:46 PM