So one thing I was seriously kicking myself about a while back was missing Boucherie's beer dinner with Brooklyn Brewing.  Many local beer geeks went and raved. I remember it was that kind of dedication to the craft beer community that brought us all together when Boucherie Chef Nathanial Zimet was shot and seriously wounded last summer.  The result of the beer community's appreciation was the event I co-organized, Beers Not Bullets.

I was super happy to see Chef Nathanial himself in his chef's whites at the helm of creating and executing this latest beer dinner, based on pairing 6 Swedish beers (from the Avenue Pub-led collaboration/extravaganza) that he had NEVER tasted before for this beer dinner that happened on Monday, January 23.

It was really something else.  There were a few nitpicks, but overall, I was awed by how spot on the flavor pairings were.  Let's break it down, shall we?

1st course:
Goat’s Cheese Au Poivre Arugula Salad with Grapefruit Vinaigrette
paired with: Närke/ Tanngnjost och Tanngrisner ( T&T )
Boucherie jumped right into the thick of things with one of the more unusual beer offerings of the evening.  I was pretty impressed with what a ballsy move it was.  The Tanngnjost och Tanngrisner is an homage to a traditional Swedish beer-type beverage called Gotlandsdricka.  It's made with, like, twigs and juniper, and smoked barley and rye grain. It is a strong and very assertive beer. Looking at the ingredients of the first course, I was apprehensive.  Grapefruit, really? Big chunks of black pepper? Arugula? These are also very assertive ingredients. However, somehow all these big aggressive flavors sort of smashed around and into each other into... something really tasty. I don't know how it worked, but it worked.  I particularly enjoyed the way the salad elements actually toned down the extreme smokiness of the beer, allowing me to enjoy some of the underlying flavors in there, like the juniper (a difficult flavor profile for me to determine in this beer, actually.)

So, a funny thing happened with the second beer of the night. I was at the table that appeared to be the first table served, and they brought out these glasses of very dark beer.  Since the description of the InternationALE was an India Pale Ale, I was immediately suspicious that this was the incorrect beer.  I gave it a smell and a taste.  Yeah, that's not the InternationALE.  Even if I hadn't had it on Saturday (which I did) it seemed pretty clear it was the next one on the list. I asked the woman who was bringing the beers out if she was sure this was the InternationALE, she went and checked, and they figured it out lickety split, with the added bonus of that the next beer had a chance to warm to room temp during the second course, which I think greatly improved the flavors.  I helped! Gotta give Boucherie credit, once they figured out the issue, they fixed it quick and smooth. 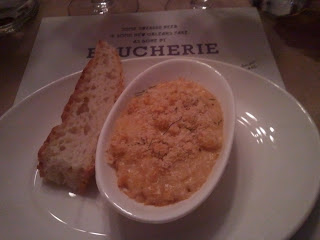 On to the gratin.  OMG I WOULD EAT A BUCKET OF IT WITH A SPOON. Also, the house baked bread was amazing. The InternationALE itself was, after all the fuss, not one of my favorite beers of the night, it seemed to have more the profile of a red ale rather than an IPA. Tom and I had a difference of opinion on how sucessful the pairing was.  I thought that the sweet malt flavors and the tropical fruit I was getting from the hops was balanced nicely by the earthiness of the cauliflower and brie, and the hop bitterness cut the richness.  Tom thought that the beer and the gratin shared a rich buttery flavor so it didn't contrast as much as he'd like.

3rd course:
Wild Duck Ragout Poutine with Blue Cheese & Fried Potato Gnocchi
paired with: Nunäshamn/ Mysingen Midvinterbrygd
This pairing was absolutely amazing. We finally were able to drink our (now slightly warmed) Mid Winter Beer, which had lots of spices and malts in it in conjunction with some of the finest duck I've tasted in a long time.  James Denio (managing partner of Boucherie) pointed out the guy who actually caught the duck, which is exactly the kind of farm to table action I'm talking about! It was described as a poutine, covering the fried gnocchi and it was just all beautiful and gamey and herbaceous and there ws the tang of the blue cheese to sharpen things up a little... and the strong spice and sweet malt notes of the beer paired beautifully with the dish. James had mentioned between courses that one of the ways he and Nate play with pairings is adding an element with the beer (or wine) that is missing on the plate.  I feel like this was an excellent example of this philosophy/technique.  I was sad that I left a bunch of the "gravy" in the bowl, but I didn't have a spoon or a piece of bread!  Oh well, considering how full I was at the end of the night, that was probably a blessing.

This was probably one of the most successful pairings of the night, and one that beautifully represented the elevated pub food theme that was happening.  This was fish & chips: New Orleans meets London style. The beer battered flounder were served over a smoked black-eyed pea puree- when Tom saw that on the menu, he reckoned it was the "often overlooked mushy pea" portion of the fish & chips plate.  Mushy peas are... gross, so I'm pleased they aren't found too often over here, but the black-eyed pea puree was delicious.  Random adorable chef moment: Chef Nathanial came out and christened them "smushy peas" as a combination of smoked+mushy peas.  LOVE!  Also, the beer was excellent. It was a well executed British summer ale. Tom said that it tasted like freshly cut cricket fields.  He was really happy with the dish, the beer, and the pairing. We both were. Oh!  The "chips" were crispy pieces of what looked like purple dinosaur kale, with the natural scalloped/frilled edges.  They were salty and light and YUM.  Also, homemade tartar sauce ("Let the fools have their TAR-TAR sauce!"- Mr. Burns, The Simpsons) was awesome.  In short: YAY.  And I could have downed a big ole imperial pint of that single hope ale.

5th course:
Vietnamese Caramelized Pork Belly, Sticky Rice Noodles
with Tempura Shiitakes & Pickled Jalapeños
paired with: Oppigårds/ Amarillo
OK, I have a confession to make.  I think that pork belly is kind of gross.  It's just TOO fatty, unless you get a good piece, I guess, with mostly meat and the fat is just sort of marbling the piece?  I dunno.  I love pork and pork fat in many forms, but pork belly... maybe not so much.  HERESY, I KNOW. So, this dish didn't really do it for me.  Pork was too fatty, the sticky rice noodles were in a pancake formation and were difficult to eat. I did like the tempura shiitakes and the few bites I did have of the belly meat, the pickled jalapenos cut the richness a bit.so I was down with them. The beer was awesome, but it's hard to assess the pairing, because I didn't really care for the dish. However, after 2 base hits and 2 homeruns, my disappointment was minor.  I was mostly trying to figure out what the matter with me was for not liking pork belly. 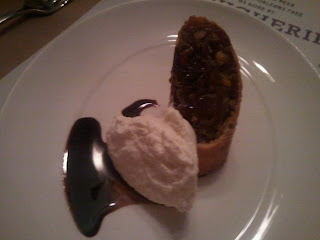 So the richness of the pork belly dish (along with the numerous other courses and beers) had filled me up to the point of near discomfort, so I was relieved when the streudel came out.  It was a small piece of streudel, and the fennel wasn't overly sweet, and it was a gentle, herbaceous, and crispy with an intriguing depth of sweetness from the sherry syrup and subtle spiciness from the 5-spice whipped cream. It was kind of an alternated universe mincemeat. The Julöl was the perfect beverage to end on.  There was no coffee service, of course, but the beer itself was as dark and complex as coffee, with those notes of aroma and flavor. Although malty and dark, it's dry and bitter on the finish and very, very drinkable. The perfect end to a wonderful meal.

Again, I'm just amazed how successful the majority of these pairings were.  The next dinner will be on Monday, February 6 - call and make your reservations now, they are already about half filled up (and that's just as of Monday night, who knows how many have signed up yesterday and today.) Apparently for this next dinner Chef Nathanial will be doing so "out there" types of stuff, playing around with technique and perhaps some molecular gastronomy.  This time, he will have a better idea of the flavor profiles and will have the experience of what worked and what didn't with this menu. He'll be pairing for the same lineup of beers as above.