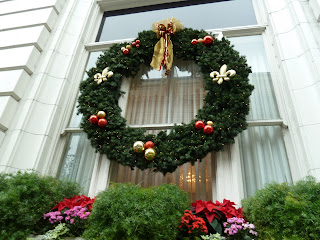 It has been a very nice New Orleans Christmas weekend. After our wonderful Reveillon dinner at August, I got up early on Friday morning and drove a friend to the airport.  That done, I worked on getting the bird crap off my car.  Went to the Shell on Canal, which was not nearly powerful enough to attack the sheer volume of poop that was quickly cementing all over the car.  Went down the road to the cheap gas station on S. Carrollton that has a car wash.  This one was much more effective.  As I was driving out, a fellow came up to me and totally flimflamed me about something or other (called the "filange" by me for the purposes of my storytelling) being messed up behind the right front tire.  He pretended to fix it and I gave him some money.  It's Christmas, after all!  And it was a good scam, well executed and a soft sell.  After that, while I was trying to wipe off the remaining bird crap with a Kleenex, a squeegee guy with a bucket, spray cleaner, and rag came up to me and asked if he could do that for me, that way he could get himself a sandwich.  Sounded like a good exchange, so we went with that deal.

So, that was exciting. Later that day we went to J'Anita's at the Rendon Inn for lunch and then to NOLA Brewing for the pre-holiday brewing tour- much fun! Tom left with a mysterious package that he declined to discuss with me.  Hmmm. Had a couple beers at the Avenue Pub as well before we retired home to make lamb korma. Which was delicious.

On  Saturday, after getting up early to feed my friend's cats, I went to Rouses for groceries for Christmas Eve spinach lasagna before the hordes descended. The rest of the day was quiet- the weather for the weekend has been pretty consistently gray and foggy and misty- perfect for hunkering down and watching TV.  But I made the lasagna and it was amazing.  We also busted out our holiday fruitcake.and declared it worthy. 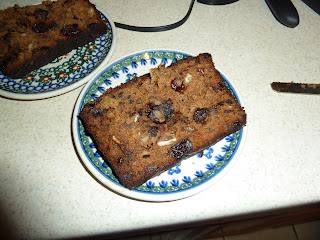 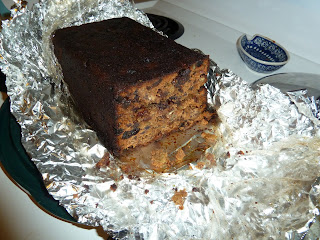 Before bed, we opened up one Christmas present each- Tom opened up the messenger bag I got him and I opened up an unlabeled bottle of beer with a NOLA Brewing ornament. Turns out that Tom had ordered me a personalized NOLA work shirt, but it hadn't come in yet, so Melanie, head of brewing operations, decided to give him a bottle of their internally distributed Christmas Ale (along with the NOLA Brewing ornament) to give to me as a placeholder. We drank it on Christmas Day and it was delicious- a dark hoppy ale in the style of Sierra Nevada's Celebration Ale. 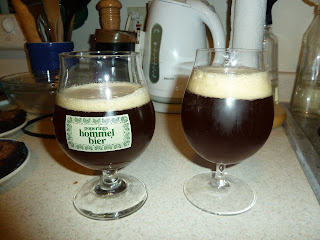 We filled each other's stockings and called it a night. The next morning, Tom went to feed our friend's kitties and when he returned, he brought up stockings for all four of us - Tom and I and the cats. The cats loved the several catnip toys and mats we bought for them, as well as a sausage shaped catnip toy from their Grandmeow Joan. We opened stockings and presents.  We had fun buying for each other this year! Locally inspired presents included a "Drink Deck" of cards that represented 52 bars in New Orleans (you get a discount for each) and a very cool art/poetry book, "Constance: Delicate Burdens" dedicated to New Orleans artists of all kinds - the corresponding blog is WeAreConstance.org. Also CDs from Ingrid Lucia and Hannah KB. We both worked hard to do as much local shopping as possible: Fleurty Girl, Stein's Deli, Octavia Books, Defend NOLA, Vieux Carre' Wine & Spirits, and Southern Candymakers. (there was some use of Etsy and Woot Shirts as well!)

It was all delicious, and the service, save for one small quibble was great.  My quibble is small, but it seemed out of character so it kind of glared at me. Basically, we both ordered a glass of Pinot Noir (at $9 a glass).  They were out, so our waiter subbed out for glasses of Cabernet (without asking us first).  He didn't come back to check to see if we liked it (which... we weren't crazy about it, though it wasn't worth making a fuss over it) and then the bill charged us $11 per glass, which I thought was kind of less than classy, since it wasn't our fault that the wine was out and wasn't consulted on a substitution. I dunno. Just thought it could have been handled a bit more smoothly.

Afterward, we went to the Roosevelt Hotel to look at the lights in the lobby.  Very festive! 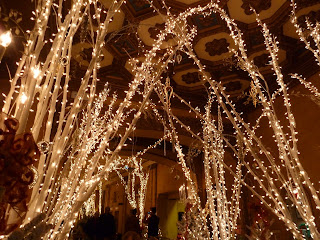 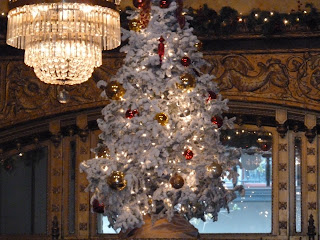 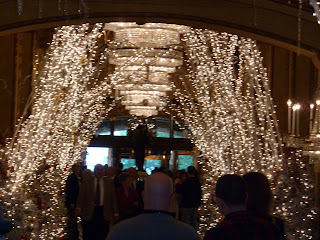 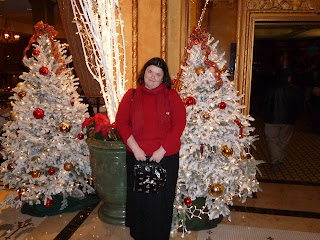 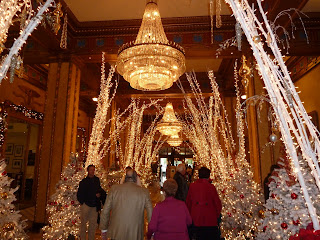 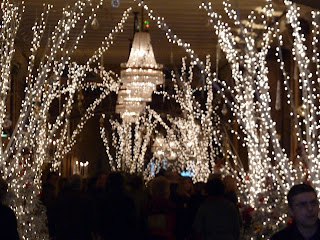 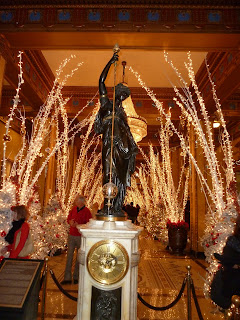 Happy Holidays from Tom, Taz, Marley, and me! 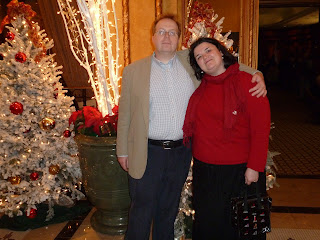 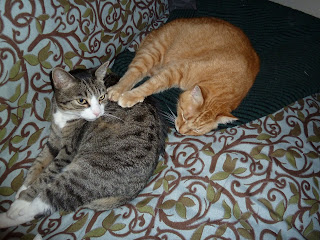