Whatever you call it, damn it was good.  We got: Thai Crab and Coconut Soup with Ginger and Basil; a cold glass noodle salad; Laab (Finely minced beef seasoned with fish sauce, lime juice, chile, shallots, palm sugar, toasted rice, and fresh mint); Thai Fermented Pork Ribs with Sticky Rice; Oxtails in Sour Northern Curry; Green Curry Duck; sweet sticky rice for dessert. Everything was fantastic.  We drank a lot of milk while eating the food- though it was actually pretty easy to adapt to our own heat sensitivities, by avoiding pepper looking stuff.  Not always successfully (thus the milk) but even with fire burning peppers in the duck, everything was SO GOOD.  I pushed myself heat wise because I knew it would totally be worth it, and it was. The layered complexity of heat and sweet and flavors was A-Mazing. Probably the best Chef Pete experience since our original Burmese foray (though we were sadly out of the country for Korea.) Can't wait for some comfort food tonight.

Other outings this week: went to Muriel's for a work lunch, which was nice.  Those goat cheese crepes they do are so good.  They were with shrimp this time, but I've had them at the FQF with crawfish and they are good both ways- it's the sauce, whatever is in it.  Besides creole crack. Had their pasta dish with fried oysters which tasted good, but I don't know if I got a bad oyster or if it was something else somewhere else altogether, but let's just say that several hours later, the contents of my stomach where awfully anxious to quickly exit. I would definitely try Muriel's again, I don't know where that bout of food poisoning came from. And even if it was from there, those damn crepes are worth it. Also, really great service and very festive and grand dining rooms.

Yesterday I had the pleasure of attending TSAI's "Glad Tidings" holiday brunch, held at the home of a co-worker of mine, coincidentally enough. Everything looked so good I ended up trying everything. I started with the wild rice grits with chard, mushrooms, and queso fresco, the sourdough and thyme sourdough bread, and a satsuma-beet mimosa. 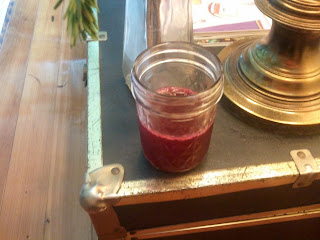 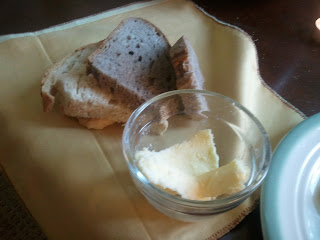 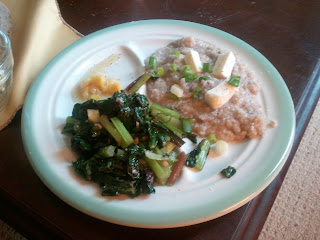 I chilled out for a while listening to the always wonderful Hannah KB Band: 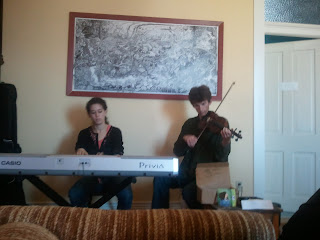 And then returned to get my second breakfast, root vegetable hash with cauliflower, mustard, and baked egg. And, um, a bloody mary. 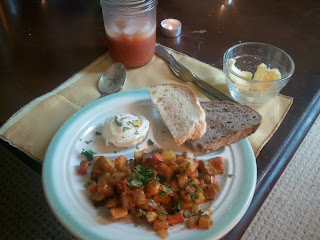 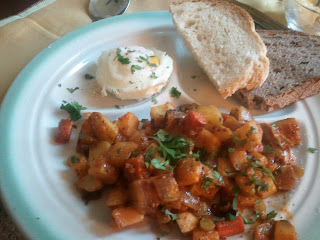 Killer awesome amazeballs.  I ordered the apricot and ricotta-stuffed brioche French toast to go, because I knew Tom would appreciate it and it looked like it would travel well.  I was right on both counts!

Last night we went to Middendorf's for a meeting with a friend that could result in an interesting and incredibly cool project - stay tuned, if it gets off the ground I will share.  I had their Pontchtoula Strawberry Mai Tai (tasty), the baked oysters with garlic bread crumbs and cheese, and a quite nice serving of BBQ Shrimp which were different that the ones I've had in New Orleans.  They were peeled so it was a) easier to eat and b) the sauce was right on the shrimp.  Nom. It's heretical, I know, but I liked them better that the heads on, bib-requiring BBQ shrimp I've had around these parts.  Yes, less bad ass, but still delicious.