Two years ago, Tom and I flew down to New Orleans from Boston for Christmas.  I wanted to show Tom the city I fell in love with back in May.  He hardly had the chance to see anything in New Orleans when he came out for that wedding and didn't understand my new obsession with it.

We flew in on Christmas Day (best day to travel in my experience,) checked in at the Bienville House, and headed across Canal Street to Restaurant August on Tchoupoutoulas. We had a wonderful Christmas dinner- definitely a good way to start my quest to get Tom on board the New Orleans train. I found my Chowhound writeup (where I used to discuss my culinary exploits before I went up a step in narcissism and started this blog) here.  Upon reading the menu from 2009, I see there's a couple courses that have stayed in the mix- the  Brouillade aux truffle (La Provence farmed egg with Perigord truffle) and the turtle soup "grand mere" finished off with Pedro Jimenez sherry. Also, looks like the Reveillon menu now 5 courses for $95 instead of 7 courses.

We started with cocktails- Tom had a splendid Gravier Gin Fizz, and I had the special house Manhattan, which used plum bitters.  Hooray for Manhattans! Man, that was a great way to start the evening. Tom would be driving home so after his gin fizz he settled on one of the fairly plentiful selection of local bottled beer.  Nothing crazy exciting, but all local stuff and a pretty good list of it. He had a Bayou Teche LA-31 Biere Pale,

Once again, I did the wine tastings.  First course was the foie course: spiced foie gras au torchon (with an espresso "vein," which I can't figure out a less gross way to describe) with a red currant linzer torte with a candied hazelnut crust. Also candied red currants. Aw, they're cute! Wine pairing was a sparkling rose.

Next course was the Brouillade aux truffle paired with an Alsatian Gewurztraminer, and after that was the turtle soup paired with a really excellent white 2010 Cotes du Rhone. Meat course was roast duckling with braised red cabbage and house made spaetzel and some sort of duck confit with bread crumbs? I don't know exactly, but it was pretty tasty. Wine pairing was a Russian River 2008 Pinot Noir from a vineyard called Merry Edwards, named for the head vinter, a lady pioneer in the California wine world.

Tom had decided to get the 4 course "Tasting of Farmer's Market Vegetables" which led off with an amuse bouche different than the standard egg and fish custard fume thing in the egg shell, some sort of fried cheese bite, delicious.  His first course was a quince consomme poured over a whipped truffled celery root, his second course was broccolini with aleppo and ricotta salada with pecans and a Plaqumines Parish citrus confit.  I'm pretty sure the existence of that citrus confit alone is what made him order that tasting menu. His third course was acorn squash risotto with Brussels sprouts and mushroom Parmesan crisps. I could eat a truckload of those cheesy fried mushrooms.

For the dessert course, I had a steamed dark chocolate torte with cherries. a spiced milk chocolate ganache, and roasted white chocolate ice cream.  Tom had the satsuma "creamsicle" which was a buttermilk and satsuma sorbet with satsuma segments and sauce and general satsuma awesomeness.  This was the only course I took pictures of: 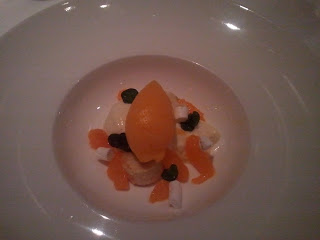 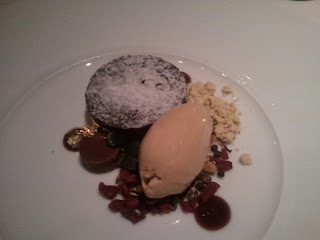 Because it's super pretty, especially the satsuma one. My dessert came with a 1999 French late harvest grenache, which was a lovely dessert wine to close out with.

And then of course the final course of mignardises arriving with our check, of which there were four including a praline and a sour jelly candy, a blueberry financier and another fancy bite that I can't remember what it was called- something French, I'm pretty sure. They were all awesome and it felt like gilding the lily as I ate these last bites and it was fabulous.

I haven't been to August for dinner since that Christmas Night of 2009, and I'm pleased and relieved that it still ranks as an excellent place for Reveillon dinner. It was memorable and special to us as jaded residents in 2011 as it was as starry-eyed tourists in 2009.