Three Days of the Pop-Up

Man, it's been a frenzy of pop-up action over the past few months!  So much so, that on Sunday night we had the option of three different pop-ups happening (Noodles & Pie at Coulis, Streats McGee at Cafe Rani, and Chef Pete at Stein's) in addition to Pizza Delicious.  Sunday was a tough choice, but we made it work knowing we'd been to Rani for Streats' food last week and that Noodles & Pie would be serving on Monday night as well.

But I'm getting ahead of myself.

Saturday was a busy day of running around doing errands and such, and when I finally had a chance to sit down and check Facebook, I saw that Hansen's Sno-bliz had posted that it was their last day open for the season!  So we hopped down there and waited in line for a while and got our final sno-blizzes of the season- I had satsuma and ginger, and Tom had pineapple and cream of coconut.  Was a little odd eating them when the weather was so mild and temperate- the experience loses a little something by not occurring in the godawful heat and humidity.

For dinner, we headed uptown for some delicious Tsai vegetarian treats.  The dinner was being held at the same place as the noodle bowl party that served as our introduction to Tsai a month or so back.  On the menu was: Polenta with either Roasted Eggplant Walnut Sauce or Blue Cheese Mushroom Sauce (or both!) Spicy Turnip Greens, and Roasted Carrots and Radishes with Lemon Horseradish Dressing.  We got the large plates, which came with two large and yummy slices of polenta along with the two side dishes.  Tom can't stand blue cheese, so he got both of his polenta slices decked out in the roasted eggplant walnut sauce.  I do not have the same aversion, so I tried both sauces.  Like so: 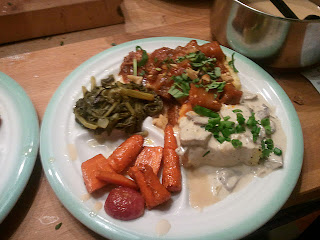 It was, as usual, freaking delicious.  I just feel so welcomed and comforted by Aron's food.  I just want to stay and eat with these people ALL THE TIME.  Hilariously, we got there about an hour after they opened, and since we're usually there right on time (which in New Orleans, actually equals "early" and sometimes that means "rude"), Karen was worried about us.  The music was great, keyboard, fiddle, vocals.  At one point Tom observed that it was like a Cajun Dr. Who soundtrack. It's really wonderful how Karen and Aron are able to bring together a community around food.  Their attention to the whole experience of sharing a meal together makes for a very enjoyable and satisfying evening for both the body and the mind.

Afterward, we wandered around Magazine Street because the Art for Arts Sake street fair was going on, and it was just such a lovely night.  (the weather's been gorgeous lately).  We felt pretty satisfied with both the food and the general space of place we had found ourselves in.  Yay.

Sunday night was the night of the aforementioned tough choice making.  We read that the guy, Chef Pete, who was cooking at Stein's was doing Burmese food, and that made a tough choice a LOT easier.  Menu:

Holy crap was it good.  We had the noodle salad, the split pea rice, the chicken curry, and the pork curry. I just... god.  It was absolutely amazing.  Incredible flavors, expert and sophisticated technique, and the guy did it with pretty much no kitchen at Stein's whatsoever.  It was some of the best food I've ever had.  EVER.  It was exciting, it was vibrant, it was bold and soul-satisfying.  We ate with plastic forks in a technically closed NY deli in New Orleans and it was amazing.  Did I manage to take any pictures?  Um, no.  My phone was out of juice.  Did I manage to convey in any intelligent and meaningful way my joy to the chef, to whom I introduced myself?  Um, I believe the phrase "maximum deliciousness" was the height of my sparkling wit and conversation skills.  He did give us a sago pearl dessert to go, so I guess he wasn't totally put off by my inability to form a coherent or intelligent sentence!  Or he felt sorry for me.  Either way, sago pearls in coconut milk with banana jam for us, SUCKAS!

Oh, did I mention that Chef Pete is a BAMF?  This article was written at the beginning of the year, when he inexplicably transformed a suburban neighborhood red sauce Italian joint called Mimi's of River Ridge into a cutting edge restaurant serving regional Italian cuisine along with other globally influenced dishes.  This guy has serious chops, doesn't give a crap about making food pretty or fashionable, eschews pretension. and is pretty much the textbook definition of bad-ass m-f-er. His cooking philosophy is "Doing my part to knock the nonsense out of great food!" This more recent article is more up to date with his current adventures, but plays down his total bad-assery.

Note: I had leftover chicken curry for lunch the next day and it was still transcendentally phenomenal.

Next week is going to be Latin American cuisine, and the menu (according to his Facebook page) will be:

I recommend getting there early- I know I will and I will order ALL THE THINGS.

Anyway, on the heels of that, we decided to give the Noodles & Pie place a look-see on Monday night.  Noodles & Pie is a project of the chefs at Dante's.  They serve noodle bowls and pie.  Also a couple appetizers like steamed pork buns and Vietnamese-style lettuce leaf-delicious pork wraps. 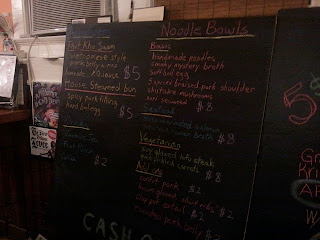 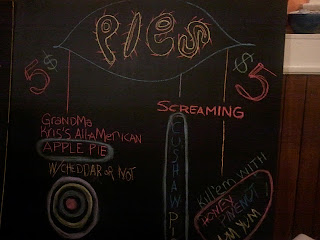 We brought some beer with us and each ordered an appetizer (one of each) a noodle bowl (basic/pork with an add-on of short ribs for me and vegetarian for Tom) and a piece of pie (apple for me and honey/pine nut for Tom.)  I took plenty of pictures for this, I tell you what!


It was a damn delicious dinner.  Totally scratched that comfort food kicked up to another level itch.  I mean, noodles and pie!  What's not to love about that!?  I admit, it was a bit gluttonous to add on the short ribs, but damn.  It was an option. IT WAS THERE. At least I didn't add the confit pork or the pork belly to the mix as well.  (other delicious sounding add-ons).  Tom freaking loved his honey-pine nut pie so much, I think he would have married it except for all the SOCIETAL RULES ABOUT A MAN LOVING A PIE. Er, now I'm thinking about American Pie, and that brings a somewhat tawdry image to the mix? Let me amend: his love for the pie is great, yet chaste.  Chaste, I tell you!

Man, but a big ole bowl of noodles will set you right on a Monday night. This may be our tradition for the foreseeable future: Stein's for Chef Pete on Sundays, and Noodles & Pie at Coulis on Mondays.

The thought of this tradition pleases me.

Up next for Tsai as well- a Tawainese Brunch on Bayou St. John on October 20.  Space is limited, so make a reservation!

Tonight we stayed in and made a Thai-esque curry with some Hollygrove farm vegetables (sweet potato, summer squash, tomatoes) along with curry paste, coconut milk, chick peas,and fish sauce.  It was nice, but a bit of a letdown.  Plus we had to clean the kitchen afterward! That sucks!  Tomorrow is our seventh wedding anniversary, I believe we'll be going to Dick & Jenny's.  It should be nice and low-key.