Autumn is here.  Today, I'm wearing a sweater and cords (still resisting socks though.).  People are bundled up in jackets, hats, scarves, and mittens, because the temps have dropped below 70 degrees.  I approve of this, as it means that this is pretty close to as cold as it gets (it will drop another 20-25 degrees in the winter.)

In conclusion: HOORAY NEW ORLEANS WEATHER.  Got through hurricane season, with Hurricane Irene bypassing us and hitting the Northeast (the interior areas of Vermont and New York State, especially) and Tropical Storm Lee raining through Labor Day weekend, but it was really just more damp than stormy. 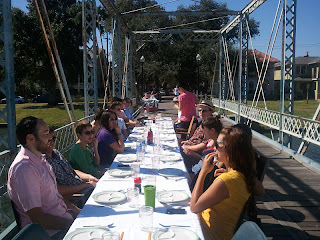 Now that the intense heat of summer has faded, that means it's comfortable to sit outside for drinks and meals.  On Sunday, we sat on what I think of as the "Cabrini bridge" because it's right outside of Cabrini High School on Bayou St. John to eat a Taiwanese-style brunch, courtesy of our favorite vegetarian pop-up, Tsai. 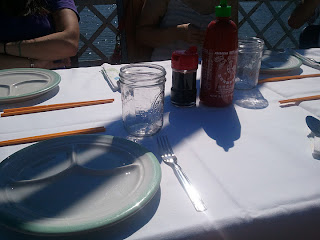 We sipped upon iced apple green tea while waiting for our food to be served.  The meal was four courses. The first course was oven baked buns with sweet potato and shiitake filling: 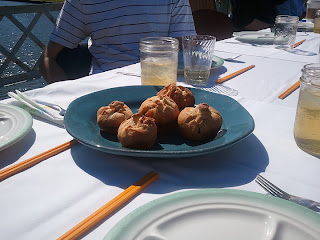 The second course had both the black rice rolls with roasted seaweed, fried tofu, and salted radish and the salty soybean soup with the shittake beignet (which was amazing). 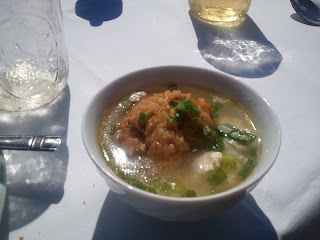 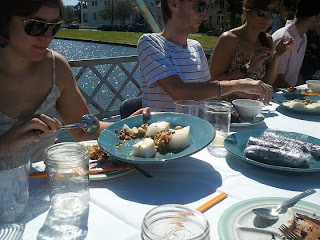 The last course was fermented rice with orange peel.  Tom said that it tasted like rice pudding and marmalade (two of his favorite things.) 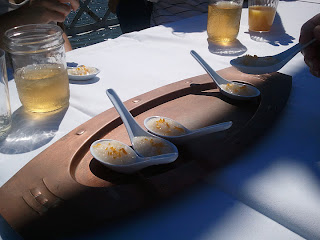 All in all, YUM.  In other pop-up news, we had Chef Pete's Indian food later that night- we absolutely loved the Chicken Tikka Masala and the Dosai (with lamb and spinach- YUM!).  We also hit Noodle & Pie on Monday- they had a ham hock and apple steamed bun that was INCREDIBLE, and I had the brisket noodle bowl with the add on of braised ham shanks.  Full of porky, beefy goodness.  Tom stuck to his vegetarian noodle bowl, which he reported was excellent.  We were so full we had to take our honey pinenut pie home to eat later.  Which we did.  With great gusto.

We actually ate in on Tuesday and Wednesday- crazy!  I know! - but we enjoyed, as always, the 3 course prix fixe at MiLa (HMOG, the butternut squash soup was amazing) for lunch on Thursday and then picked up a white pie and special autumn salad from Pizza Delicious - local mizuna and golden frill salad greens from Hollygrove Market, roasted and sliced portobello mushrooms, pickled local organic radishes, with a homemade caramelized shallot vinaigrette and slices of Parmesan on top. It was amazing.  The white pie is also one of my all time favorites.  I just saw that they are offering both of those things on Sunday as well, and I am very tempted to get the same thing.  Maybe also a meatball pie.  Leftovers!

After dinner we strolled in the cool evening air to the Bulldog Uptown for NOLA's cask of their (much beloved by Tom) Smokey Mary aged with oak - they called it the Oakey Smokey.  Man, that beer was DANGEROUSLY drinkable. The oak was pretty subtle, but I really enjoyed the beer- more than the regular Smokey Mary from the keg, actually.  We had a couple pints, and hung out in the beer garden with NOLA Brewing's VP, Dylan Lintern, his lovely fiancee Lea, and their AWESOMELY ADORABLE black lab puppy Tipsy.  Tipsy lives up to her name and parentage- she absolutely loves beer and was in heaven when a quarter-filled glass got spilled.

We walked home in the cool air and chuckled about the heat lamps being out in full force.  But I love it.
Posted by Nora at 11:58 AM