The weekend ballad of Tom and Lee

Tom is my husband, and Lee is Tropical Storm Lee who decided to join in on all the birthday celebrating although he was not invited (though, to be fair, he may have been crashing Southern Decadence instead.)

Our friends Paul and Emma from the UK were looking forward very much to some hot and humid New Orleans weather. And they got it... for a day. They arrived on Tuesday, we picked them up from the airport (an airport run where we amusingly discovered that you can get to go cups from the Acme airport bar as long as you aren't going through security), and we went to Juan's Flying Burrito for burritos and mojitos. They also bestowed upon us much Cadbury Dairy Milk and Fruit & Nut as well as some local Bristol brewery beers, which will be sampled and reviewed in my beer blog in the (hopefully) near future. They went out and about on their one hot day on Wednesday and met up with us for dinner at Dante's Kitchen that night. Oh, that was super nice. I hadn't been there for dinner before, and it was great. Really fun cocktails (the Plum Luck "Plum-infused brandy, St. Germain elderflower liqueur, thyme black tea, lemon, Peychaud’s bitters, cinnamon garnish" and the Gentry Fizz "House infused peach bourbon, Dubonnet Rouge, lime, honey, Peach bitters" were especially enjoyed) and excellent food.

Our starters (after the complimentary spoon bread with molasses butter came out) were excellent- Tom had the corn and crab soup (one of his favorites this time of year), I had the watermelon salad which seemed so interesting with the following ingredients: "griddled halloumi cheese, kalamata olives, mint & parsley, huckleberry balsamic vinegar & oil" that I had to try it. I mean, watermelon and olives? With FRIED CHEESE? All righty. It was a good call thankfully, because it was excellent. VERY ambitious and inspirational flavor pairings. Emma got the (head-on) shrimp and grits which she loved, loved, loved. After we explained what grits were. She would go on to try several restaurant's interpretations. Paul, our vegetarian, had the roasted sweet pepper salad, which he quietly enjoyed.

As is the case in many places, we enjoyed the entrees too, but not to the extent of the appetizers. Tom and Paul both had the local farm vegetable plate which had many veggies along with a quite large and tasty goat cheese and onion croquette, I had the chicken under the brick, which I'd heard amazing things about (I don't normally order chicken at restaurants), which was tasty, and Emma, after much indecision (everything looked so good!!) got the Confit Pork Steak and Spare Ribs plate. We were intrigued by dessert, but quite full, so we ordered a dessert cocktail which I can't find on the website, but it was called Goodnight Moon and it was OMG DELICIOUS.

The next day, Tom, Emma, and Paul went on a swamp tour by Pearl River Eco-Tours, which they enjoyed- Tom said that he wanted to bring me back there soon so I could experience it myself. They picked me up for lunch and we went to Surrey's (our vegetarian guest go-to) where Emma had more shrimp and grits, Paul had a spicy vegetarian poboy (or maybe it was a normally spiced poboy kicked up with hot sauce at the table) which gave him the hiccups, and Tom and I spit the crab melt sandwich and their cuban sandwich.

Later that evening, we went back to the airport to pick up our friends from the North Shore of Boston, Michael and Law. We scooted around the worst of the Saints (preseason!!) football traffic and got them to their hotel, the Roosevelt. The Roosevelt happened to have one of the swankiest bars in the city in it, the Sazerac Bar, so we hung out there over some sophisticated cocktails and whatnot till it was time to eat. We tried MiLa but it was closed (at like 8:15... so, wtf?) and we hightailed it over to Herbsaint, where everything was awesome, but I was pretty tired and had had a lot of cocktails and wine (they had a delicious rose wine flight tasting I indulged in), so I can't recall the specifics. I remember Tom ordering a side of dirty rice and proclaiming it the best he's had, perhaps with some geographic or chronological qualifier, I cannot recall. However: Herbsaint: GOOD.

The next day we met up with Michael and Law for lunch at MiLa, and we very much enjoyed their 3 course prix fixe- corn and crab soup or salad, flounder or veal cheeks, rice pudding or banana ice cream. It was all excellent, as usual. Since Law can't eat eggs, desserts are usually off limits to her, but they had this chocolate sorbet that was SO good. Without the dairy that often coats the tongue, the chocolate flavor was incredibly intense and pure. Well done!

After that we went to the NOLA Brewing tour, which was lots of fun as always. Now I know I haven't mentioned it since the start of this blog entry, but Thursday it started raining, and by Friday, it was just flat our miserable pissing and pouring down raining. Friday may have been the roughest, rain wise. Saturday and Sunday at least had breaks in the rain. But we were able to introduce Michael and Law to Paul, and all three of them to NOLA's beers. Local friends Kara and Trey showed up as well, and I was able to congratulate NOLA Brewing VP Dylan on his engagement and brewer Melanie kindly sent me home with a birthday sneak peek bottle of their new smoked malt beer, Smoky Mary. Which we brought back to our apartment and tried immediately. Verdict- Tom LOVED it, so it was a great early birthday present indeed. Hm, at some point Michael, Law, Tom, and I went to the Avenue Pub for a pint and to try the Franconian lagers on cask that were being offered.

That night we all went to Domenica for dinner. Our friends Dom and Joe and their daughter Erin were meeting us there after having arrived from Northern CA the night before, so it was great to see them. Domenica was great- it accommodated our party of nine including an 8 year old and a vegetarian beautifully. We all chatted and had a nice time, ordering pasta and pizzas and the like. We got the chef's choice antipasti/salumi platter which was pretty enormous and delicious. It included pickled fruits and marinated vegetables, as well as cheese, meats, and savory beignets. Recommended.

Afterward, Dom was keen to try a Sazerac in the Sazerac Bar, so he, Tom, Paul, Emma, and myself, headed over there (Domenica and the Sazerac Bar are both in the Roosevelt Hotel) and had a round of Sazeracs to close out the evening.

Saturday, again, was a rainy day, and we met up with Law, Michael, Dom, Joe, and Erin at the Audubon Aquarium, which was pretty fun times. I especially liked the giant turtle, otters, and frogs. And the penguins of course! 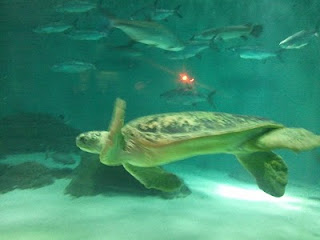 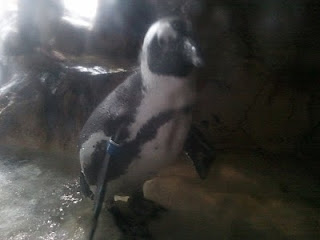 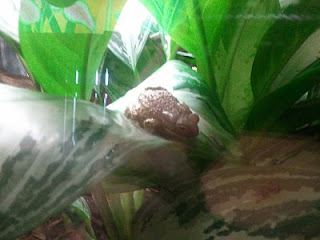 After that, Law, Michael, Tom and myself met up with Paul and Emma at the Carousel Bar in the Hotel Monteleone, where they'd made some friends already (of course!). 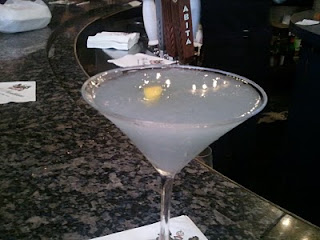 We had a cocktail and then skedaddled off to find something to eat. We tried Mr. B's, but since it was between lunch and dinner, they didn't have room for the 6 of us, so we hustled down to the Alpine to indulge Law's and Emma's cravings for BBQ shrimp. 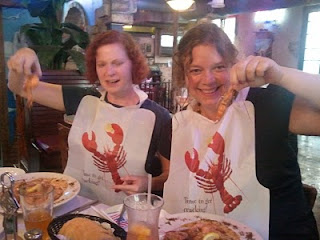 After that, we all parted ways, planning to see each other next at Tom's party the following evening.

We were happy to spend a little quality time with Dom and Joe and Erin in our neighborhood- we went to the Rum House for dinner, which was a big hit (that duck duck goose taco and the lamb vindaloo taco were amazing!) 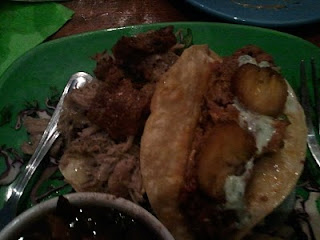 Then to Sucre for dessert (La Divinia was closed, sadly. However, it is nice to have multiple options for gelato in the neighborhood!) Erin and Joe especially enjoyed looking at the beautiful confections that Sucre had on display. They also enjoyed running and splashing about in the rain, which was a good thing because by the time we came out of the Rum House, it was POURING. Heh. Dropped them off at their hotel and thus ended another excellent New Orleans day.

Sunday was PARTY DAY! We didn't do much of anything all day except lounge about the house and then we went to the Avenue Pub Balcony to have our (what ended up being) private event. (there had been renovations the previous couple of weeks and it wasn't quite open to the public yet.) The Avenue house chef, Chef Bull/Joel White prepared a wonderful array of food for us. I can't emphasize enough how great he was to work with- he really wanted to make food that Tom loved and went the extra mile to make sure he did. Example: house smoked bluefish. Chef Bull tracked down the fish and smoked it even though we were in the middle of a tropical storm. Amazing. He also served up duck pastrami sandwiches, potato salad, and hummus. Everything was awesome. We also had a non-traditional red velvet doberge cake from Debbie Does Doberge, which everyone raved about. The beers that Polly put up there for us were excellent as well: Mikkeller's Drink in the Sun, Sierra Nevada Tumbler brown ale, Brooklyn Brewing's Concoction, Moylan's Moylander Imperial IPA, and Unibroue's Blanc de Chambly. Jaye the bartender was wonderful, and we thank Polly and the Avenue Pub staff for letting us use the space. We couldn't think of anyplace we'd rather celebrate Tom's big 4-0.

Afterward, we went to Pete's which involved singing along to the jukebox and Tom drinking Johnny Walker Black. Good times!

Monday was a chill out day. Tom and I stayed at home while our friends did their own things. I started some red beans (and made a separate vegetarian batch for Paul) and we entertained at our house. It was very relaxing, just what I needed. After dinner was done, we took Paul and Emma to Frenchmen Street, where we went to the Spotted Cat and listened to some music- Dominic Grillo & The Frenchman St. All Stars. 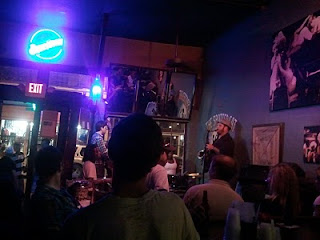 Tuesday was Tom's Actual Birthday! We got gussied up and went to Commander's Palace for lunch with Michael and Law on their way our of town. Tuesday was absolutely beautiful, weather-wise - sadly, everyone was leaving. Commander's Palace was a blast, as always. Food was great, service was top notch, and we had some great wines they had discounted- they were doing their annual cellar purge. Company was fantastic and it was just a wonderful time. Commander's never disappoints.

Although very full from lunch and sleepy from the long mid-day nap we took, we had one more visitor to meet and dine with- we met up with Shana and local friend Sarah at Rue 127. We all had 2 courses of appetizers and desserts. It was yummy and laid back. (Note my descriptions are shorter and shorter as each day passes, I am sure you readers must be grateful.)

After dinner, we got home and tucked into bed, our long weekend behind us. We spent some time with people so dear to us in the city we love. We'd eaten, drunk, laughed, ducked the rain, talked, and relaxed. Thank you to everyone who made this weekend what it was. Fantastic.
Posted by Nora at 11:40 AM