I try to talk about the culture of New Orleans here on this blog as I experience it.  Most of the time it's about food, music, festivals, cocktails, parades, second lines, recovery, neighborhoods...but a big part of New Orleans culture is, regrettably enough, street violence.  It's part of the narrative of this city.  Before Katrina, during Katrina, after Katrina, Uptown, Downtown, Central City, Bywater, Mid-City, Treme... it fills our newspapers and crime blotters.  It is invariably mentioned in the same breath as any of the many wonderful things about the city. I try not to think about it too much, otherwise I'd be living my whole life in fear.

Early in the wee hours of Sunday, September 25 (around 1:30-2:00am) a colleague who is on the staff of one of our non-profit partners was driving an NPN co-worker home in her car from her birthday party.  They dropped off an NPN intern in Mid-City and approached a stop sign at North Olympia and Toulouse streets. Random violence followed.  From what I can gather, Rafael tried to escape the carjacking attempt by driving away.  The carjackers shot at the car from behind and shot him in the back of the head.  He lost control of the vehicle and crashed into a nearby house.

He's in ICU after brain surgery, recovering more or less ok.  However, he hasn't regained his sight yet.  The doctors are hoping that as the swelling in the brain subsides, his vision will return.  But no one knows for sure.

There's a tendency, when crime or tragedy occurs, to blame the victim.  (feel free to read the comments on this story to prove my point) In the past, I've attributed this to racism, classism, sexism, and people being general assholes.  And while those things may still be the case, I wonder if blaming the victim is just a way of trying to feel safe.  If it's their fault, I don't have to worry about it.  I don't do illegal drugs, I don't hang out alone at night, I don't dress provocatively, I'm not oblivious to my surroundings by talking on my cell phone while out and about.  I'm a good person. I'm kind and fair and always try to do the right thing.  I put positive energy out in the universe.  THIS KEEPS BAD THINGS FROM HAPPENING TO ME.

Only, you know, not so much.

I know it sounds totally obvious, and certainly on a conscious level, I understand that to be true.  Random violence (or other tragedy) is random.  It can touch anyone at any time.  But my sickened reaction to Rafael's shooting made me realize that on a subconscious level, I still believed that.  I am horrified at what happened to Rafael, and hate like hell that he did absolutely nothing to deserve this kind of ugliness.  He is kind, sweet, engaged in the community and with every person he spoke to.  He is passionate about rebuilding New Orleans and making it a better place.  He works for social justice and to help the voiceless find a way to speak to the powers that be.  He didn't deserve this.

But it happened just the same. 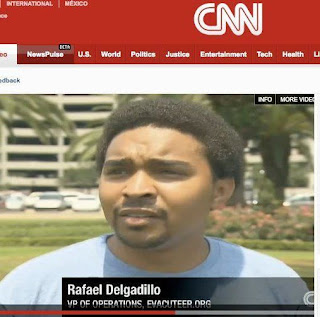 Please keep him in your thoughts and prayers.  And stay safe out there.
Posted by Nora at 2:21 PM