Green Goddess: been wanting to bring Tom here for ages. We got there a bit before noon- wanted to make sure we could get a seat, and that place is TINY.  We ended up sitting outside which was a little humid but mostly quite pleasant.  I've missed eating outside! 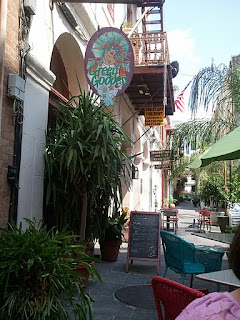 I had a couple cocktails: the Roberto Clemente, which is described as: Ron del Barrilito Rum hits a solid line drive for the gamewinning RBI with Bonal,  Falernum, Mango juice, and other Tiki flourishes on the bases, including a float of Guyana “Lemon Hart 151” Rum to keep the party movin.’"  Delicious!

I also had a D-Day Rum Sazerac, which somewhat darkly describes the inspiration as "We invented this to imagine New Orleans captured by German U-boats, leaving us without any Rye whisky to make our home town Sazeracs. “Navy Strength” Smith & Cross rum, Steen’s Cane Syrup, Peychaud’s Bitters and Absinthe rinse."  Which, oooooookaaaaay, but it was in fact an excellent Sazerac.


I had their pork belly special, with a roasted egg, greens, and grits.  There was supposed to be a red-eye gravy on it, but I didn't discern it.  It was all very good though.  The grits were AMAZING. Tom had their Cuban Luau Sandwich, which was "Artisanal salame, pulled pork, manchego, pickled banana peppers, roasted pineapple & garlic aioli on pressed ciabatta."  He freaking LOVED it.

That night we went to Stella! for dinner.  We got gussied up (which was annoying considering how many people were in like jeans and conference shirts- does dressing up for a nice restaurant mean that we're rubes?) and departed directly from the Irish Channel Neighborhood Association General Meeting, and got to Stella! a little bit before 8:30, which is when our reservations were for. We were directed to the bar, as our table wasn't ready yet.  After much dithering over their excellent looking cocktail menu (and getting called out by the bartender as being cocktail nerds) I settled on a Bijou, since I'd never had it before.  It had gin, chartreuse, and Carpano Antica sweet vermouth.  Since  I love Carpano Antica, I was pleased to find that the Bijou really highlighted the vermouth flavor - it was a very enjoyable cocktail.

After about 15 minutes, the hostess came in and told us that there was a table available, but it wasn't one that people "tend to... want." and that another table would be opening up in about 15 minutes.  We chose to wait for the "better" table, since we were comfortably ensconced at the bar, me with my cocktail and Tom with his Flemish beer.  It was a little sour, and tasty, and low ABV, perfect for Tom the Designated Driver.  (he later had their non-alcoholic drink with cucumber, mint, pineapple, and lime.  Very refreshing and tasty.) 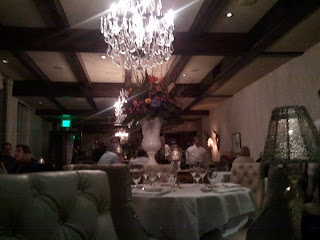 By the time we sat down, it was around 9pm.  We considered the tasting menu and decided to go for the a la carte menu, since I really wanted a couple things that were not on the tasting menu.

We started with an amuse of summer vegetable/fruit salad.

For appetizers, Tom had the "Roasted Potato and Parmesan Gnocchi with Fennel Fronds, Grilled Corn, Asparagus, Scallions,  Lemon Zest and Tomato Confit" which I didn't get a picture of, but he liked it. According to him, it was good, but not mind-blowing.  (when you come to a place like Stella! there's an expectation of mind-blowing.)  I had the "Foie Gras ”BLT” with Duck Paté, Truffle Mayo, Plaquemines Figs and Australian Black Winter Truffles" which was, as our waiter said, LIFE CHANGING.  HOLY CRAP.

I decided to have a salad course, although Tom declined.  But how could one resist a salad course described thusly: "Soup, Salad and Sandwich ~ Iberico Bellota Ham Grilled Cheese Sandwich, Truffle Potato Puree, Arugula Salad with Baby Beets and Balsamic Reduction"?

The grilled cheese sandwich was divine,the soup and the beets were really delicious, and the arugula salad was... oversalted to the point of inedibility.  I didn't make a fuss, because everything else was so good, though I did mention it (in an understated fashion) to the waiter when he cleared our plates, but it was really the thing that Tom remembered the most from the entire meal, which is really, really unfortunate. Because in a town like New Orleans, where there are so many wonderful choices, something like that will impact our dining decisions in the future.

Onward to the main course! 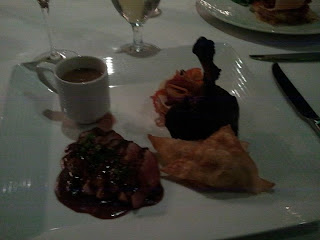 The currant-cassis reduction was on the breast.  The laquered leg and thigh was excellent- my favorite of the five.  The soup, breast, and wontons were also really good.  I didn't love the Moo Shoo pancake thing though. It was awkward to eat and didn't really add anything flavor-wise to the overall dish. 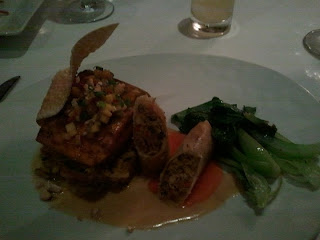 He did not love the salmon.  I had a bite, and the texture was off-putting to me (very... wet.), but then again, I'm not a huge salmon fan.  Tom finished his, and he really liked the fried rice and spring rolls, though.  Also the bok choi. The flavor profile definitely differed from what he was expecting from the menu description which, again, unfortunate, because while I loved my food, it's not looking good that I'll be able to tempt Tom into coming back to try again and drop another $250-$300 in doing so.

For dessert, we had the Plaquemines Parish peaches with lemon verbana semifreddo, raspberry "caviar," local honey, and some sort of almond "paper."  They brought out the dish with a birthday sparkler which was sweet. 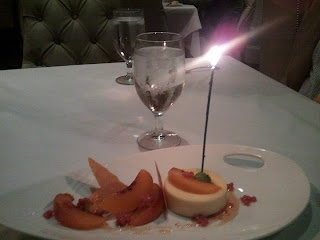 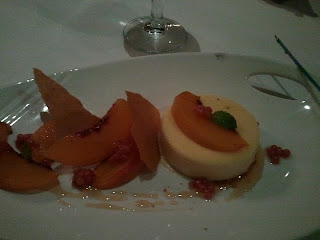 The peaches were divine.  I loved this dessert.  After dessert, I sipped on a cappuccino and enjoyed the lagniappe mignardise:

YUM.  They also brought me a little plastic chinese takeout container adorned with ribbon with a little homemade fortune cookie in it, for my birthday.  I haven't had a chance to eat it yet, due to practically exploding with all the delicious food eaten, but when I do I am sure it will still be yummy.

In conclusion: help me talk Tom into giving Stella! another try so I can go and try their tasting menu.  Also, I love living in New Orleans.  Green Goddess and Stella! in one day makes for a happy Nora.
Posted by Nora at 11:12 AM