Earlier this week, Tom read on the Reddit New Orleans forum about a new crew of folks storming the pop-up scene here. It's a vegetarian crew called Tsai and they've been serving dinner at the Dragon's Den for the past couple of weeks on Saturday nights. Tom was intrigued, especially by the rumor that they'd be moving to the Bridge Lounge soon (I have no idea about the validity of that particular rumor, though). I found them on Facebook and discovered that they would be holding a BYO(Bowl) Oodles of Noodles dinner at a "secret location" (it was one of the organizers' homes.)

We got there pretty much right at 6:30 when it opened, as is our way (and no one else's in New Orleans). We paid a $5 donation and kicked in for some beers (PBR and Miller High Life). We chose our noodle (egg, buckwheat soba, or plain wheat); our sauce (black bean-mushroom, sesame seaweed, or garlic pepper); and had our choice of up to 5 add-ins (in addition to the standard tea egg and sweet pickled cabbage, which came automatically, there was: Baby Bok Choy; Daikon Radish; Salted Radish; Shiitake Mushrooms; Oyster Mushrooms; Enoki Mushrooms; Asparagus; Cherry Tomatoes, Lima Beans; Dried Mustard Greens; Tofu; Cucumbers; Carrots; Thai Basil.)

And there was coconut ginger rice pudding for dessert, which sold Tom immediately.

We made our choices: I had egg noodles with the black bean-mushroom sauce, with cherry tomatoes, tofu, lima beans, cucumbers, and Thai basil. 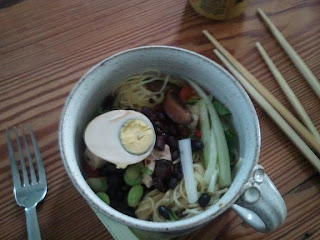 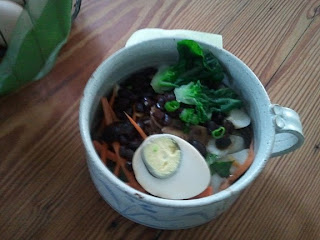 After we attached the post-it note with our choices to the bowls we brought with us and placed it on the counter next to the chef working in this home kitchen, we went outside to the back deck and chatted with a few folks, making a few disparaging remarks about hipsters until it was pointed out that Tom was wearing a pearl buttoned shirt with an ironic cartoon bird which was purchased in Austin. All this whilst drinking a Pabst Blue Ribbon. 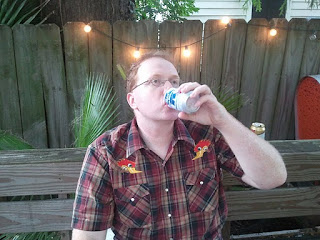 So, yeah. We stopped that conversation right quick. People were very nice- we were asked how we knew the organizers, and we had to say that we actually did not. We were here from The Internet and were strangers to these folks. It was fine, of course. Everyone was as welcoming as if we were old friends. After we finished our noodles and our rice pudding (everything was delicious) we headed to the back deck and listened to some musicians for a while, slapping mosquitos, listening to the chickens in the coop constructed next to the house and the cicadas trying to compete with the keyboard and fiddle. 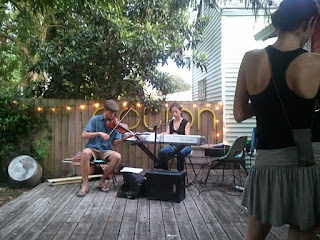 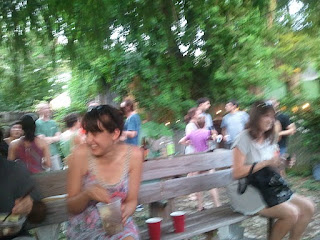 We had a lot of fun and left with happy bellies. Thanks, Tsai, and maybe see you next week!
Posted by Nora at 9:22 PM