For the past couple of weeks I've been heavily involved in planning the Beers Not Bullets fundraiser that just went off this past Friday (6/24). I am not gonna lie, it was awesomely executed. The team of folks that I worked with was so well entrenched with connections and so on top of everything, that everything went off more or less without a hitch. A few small glitches- no rinsing water/dump buckets for tasting cups, could have used more non-crawfish food and water, maybe more lights outside for when it gets dark, and some speakers inside the brewery so that people can hear the bands and announcements better. The band that was supposed to end at 10 didn't, bumping the act we had for the last hour.

But everyone was was so awesome. The volunteers were amazing, the brewers, bars, and distributors were beyond generous, the crowd was pleasant and fun-loving (not much asshole behavior that I saw or heard tell of anyway.) Chef Nathanial himself stopped by and stayed for almost 2 hours, and by all accounts enjoyed himself- especially once the tv crews were gone. The beer advocates poured out hundreds of samples from hundreds of bottles of beer, the auction went off amazingly well (raked in a couple thousand from that alone,) and the raffle was very popular! Everyone delivered on their promises, and people were so enthusiastic and positive and generous.

It was a great party, and when all's said and done, we'll have raised in the neighborhood of $13,000 for the Nathanial Zimet Fund.

Wow, look at that list of people. And I know I must have left tons of people out (because I didn't have direct contact with them, or I spaced out).

The event sold out more than 24 hours before it began, which took everyone by surprise, and annoyed some other people greatly. We had some great press from the Times-Picayune/Nola.com, NOLA Defender, Offbeat Magazine, and then at the benefit, 3 different camera crews showed up in full force. Here's WWL's story.

And last but not least, the Fox news clip that I'm actually interviewed in!

So, other than a few housekeeping issues, the event's done and I feel a little empty and exhausted. Planning this was so much work, but I loved every minute of it. This may play into what could be my next step forward in my New Orleans career path... we shall see.
Posted by Nora at 4:41 PM 1 comments

I have had lots of projects going on as of late: organized a big work meeting, trying to project manage condo improvement projects to get it to sell (this is by far the most painful and expensive and stressful project), helping a friend settle into the neighborhood, volunteering at events to help the my neighborhood booster club to help buy uniforms for the kid's sports teams, and, of course, the Beers Not Bullets Fundraiser to raise money to help with Chef Nathaniel's medical bills.

All this do-gooding has put a cramp in my hedonistic lifestyle, I tell you what.

However, fear not! I present to you the Maple Glazed Bacon Long John Donut from Blue Dot Donuts. 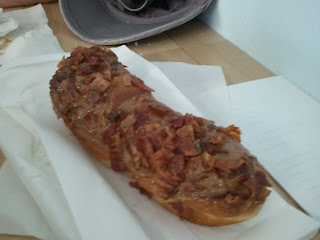 Oh, MAMA. So good. Did I mention this place is like 5 blocks from my office? Herculean RESTRAINT, people!

I've also discovered a great place, also in Mid-City. It's called Katie's and they have great crabcakes, crawfish etoufee, and fried catfish. I look forward to eating all the other awesome sounding stuff on their menu like the cochon de lait sandwich, stuffed inside pistolettes. Or the kalamata muffaletta. Or the Baltimore (fried oysters, topped with bacon and melted swiss. Or garlic feta fries. Or, or, or...! I don't know why the place is so appealing - it's just so accessible, homey, with awesome food at really good prices.

Other than that, we've been working pretty hard at eating at home, buying our produce boxes at Hollygrove Farm and finding recipes to fit what we've got in the fridge. It's tomato season down here, and we've been doing some great raw tomato pasta dishes, specifically one with goat cheese, mint, and lemon.

Oh, speaking of tomato season, this past weekend was the Creole Tomato Festival at the French Market. We were down there to sell beer to benefit the Lyons Burke Booster Club (I used my acting experience to holler at people passing by to buy ICE COLD BEER SOLD HERE! Tom was very impressed.) I didn't eat much- it was so hot and sunny, and we'd biked over from the CBD (not from the Channel, thank god, I'd have keeled over from heatstroke) but I did have some of Tom's creole tomato with Louisiana crab and remoulade sauce and waited in line for a crepe with tomato, cheese, and bacon. And a blueberry lemonade. And a Corona (after our shift).

I will note that the weather this summer so far is a little weird- and I know I've only gone through one, but natives have confirmed - because it's hot (like mid- to high- 90s) and sunny and not actually humid at all. We're in a drought and plants and grass are all shriveling up and the sun is relentless. It's like freaking Texas or Death Valley weather! I miss my swampy summer with near 100% humidity and practically guaranteed thunderstorm in the afternoon! Ah well. Gimme another beer.
Posted by Nora at 7:25 PM 0 comments

Longtime readers of this blog may know my deep and abiding love for the Riverbend area restaurant Boucherie, one of my favorite places in the city. A couple weeks ago, the chef-owner, Nathanial Zimet, was shot and seriously wounded in an attempted armed robbery. He has no health insurance, and the hospitality industry has galvanized into action, contributing proceeds from dinner sales, wine sales, tips, and the major and amazing fundraiser on July 10 at the Howlin' Wolf called Beasts & Brass. You can go here to get info on this fundraiser as well as everything else going on.

However, the beer community wanted to be involved too. It all started with a blog entry by Jeremy "The Beer Buddha" Labadie:

If you've ever been to Boucherie you know that the food is fantastic as is the beer selection. The Brooklyn beer dinner that was held in New Orleans was held at Boucherie and was amazing. Nathanial is an outstanding chef, lover of good beer and is one of our own. I think we as the beer community must come together and put on one of our best tastings ever with all proceeds going to help Nathanial.

This tasting is in its infancy and I need some ideas. I'm hoping that those readers that live out of town can help out by donating beer to this great cause. If you're interested please email me at thebeerbuddha@gmail.com and I will give you my address. Those of you that live here in town be prepared. We need to open up our beer fridges and crack open some amazing beers. If you are a local brewery or restaurant reading this perhaps you'd be willing to donate some food or even brew a special beer for this event. Anything could help. Just let me know. Let's come together and help out Nathanial.

Well, as is often the case here in New Orleans, the interest in helping out a member of the community was enormous, and Jeremy set up a planning meeting. Now, I was not originally part of the planning meeting, but I was hanging out at the Avenue Pub with Jeremy a couple Fridays ago, and that of course was the time and place of the planning meeting. Some amazing people came to meet with Jeremy and I just kind of got sucked in by all the planning! I can't help it, y'all, it's like an event planning sickness. And a good cause. I was so shocked to read about it- I remember we were at the New Orleans airport waiting to board our plane to go to CT. (We also took the opportunity to rig up a beer luggage system so that we could check through 8 beers that are not found in Louisiana to donate the event. And this was before I got sucked in!)

So we just had another meeting this past Sunday and damn, this thing has grown about a hundred times more than what Jeremy first mused about. NOLA Brewing is hosting, we've got kegs coming from local distributors Southern Eagle and Crescent Crown, as well as local breweries: Heiner Brau, Tin Roof, Bayou Teche, Gordon Biersch, homebrewers, and even New Orleans Old Rum Distillery is donating to the cause! We'll have food: crawfish (hopefully to be sponsored), jambalaya from Crescent City Pie and Sausage, food from J'Anita's... raffle prizes- gift certificate, rare beers, gift baskets, and all sorts of stuff... music!

And we launched our ticket site yesterday: CHECK IT OUT!

So, anyway, that's what I'm up to these days. This town- you just go out for a beer and get pulled into the amazing generosity of the people here. Love!

If anyone wants to send me beer for tasting- we are still doing a Beer Advocate style tasting that Jeremy originally envisioned - let me know!
Posted by Nora at 4:39 PM 0 comments

I certainly shouldn't have said it was illegal!

It's too hot (/Simpsons ref)

Well, I mean it's normal hot for summer in New Orleans. I miss the rain, though. It should be wetter. Ah well, it's only the start of the season. Still have June, July, August, and September to get through!

Blogging has been minimal because I have been cooking at home and laying low. Went on a Tullamore Dew fueled bit of a bender over the holiday weekend and have not been drinking much since then. So, these are not the adventurous days of a blogger. But that will change. It always does.

But I am super excited about the very boring news that we've cooked every day for the past week! Pesto on Friday, curry on Saturday, some crazy awesome white bean and kale thing on Sunday, pasta with fresh raw tomatoes, olive oil, and mozzerella cheese on Monday, red beans on Tuesday, another kind of curry (with okra and potatoes) on Wednesday, and a grilled chicken over grits with an awesome cream sauce with pancetta and mushrooms tonight.

I may not be able to get up in time to hit the farmer's market anymore, but I am working the Hollygrove Farm's weekly produce box with a vengeance! I think all we have left is an eggplant, a cucumber, and 2 pattypan squashes.