Had an impromptu dinner at the bar at Coquette the other night- it was fantastic. I should stop going there for brunch because brunch food/service sullies their reputation (in my eyes at least.) But my dinner was absolutely marvelous. Started with their "Higher Education" cocktail (Plymouth Gin, Cocchi Americano, Branca Menta, lemon, sage) which was tasty and complex, and then had their white asparagus soup with crabmeat, green asparagus, candied orange - so delicate and wonderful to eat. The candied orange brought a delightful citrus-acid-sourness to the soup which cut the richness of the crab and cream in a completely unexpected way. Then I tried their skirt steak, which came served over potato “risotto” with condiments of candied cipollini onions, black trumpet mushrooms, and, like, brisket, or something (something tender and smoked and meat and divine). I drank a glass of Ramon Bilbao Tempranillo, Rioja, Spain '07 with the steak, a nice pairing. Tom and I shared the marcona almond tart with the nutella gelato for dessert. YUM.

Today Tom and I snuck away to August for their prix fixe lunch. I had the beet salad with guanciale, ricotta, aged balsamic, and pecans, followed by the pork medallions (very tender and flavorful) with creole cream cheese dumplings, beurre blanc, and greens, finishing with some crazy chocolate-peanut butter confection served with salted caramel popcorn and popcorn flavored ice cream. 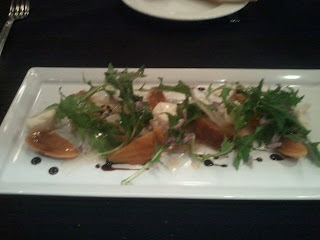 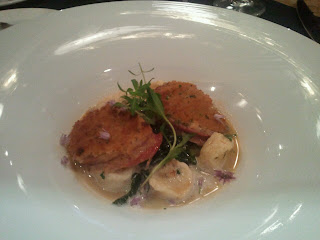 (ate dessert before I remembered to take a picture of it.)

Tom had the carrot soup, the grilled sheepshead fish, and, unfortunately, that weird and offputting ricotta cheese cake that he had the last time we were here- but we didn't recognize it from the description on the menu. Boo! At least he had some of my dessert along with the housemade peanut brittle and chocolate truffle to enjoy.

For our anniversary last week, we were both pretty tired and decided to have a nice quiet dinner at Rue 127. Tom had the mussels and frites again and then the pan seared puppy drum served with Prince Edward Island mussels, frisee, bacon lardons, ruby red grapefruit, poblano peppers, and orange broth. I had the scallop tortellini followed by what I first read as skirt steak, but was actually strip steak, which is not my favorite cut of meat anyway but I ordered it nonetheless. It was a big ass pile of steak, not particularly flavorful, with tendons and fat running all through it, and, bleh. The roasted potatoes and vegetables that accompanied it wasn't anything to write home about either. This actually worked out OK, because I finally had room to try the Chocolate Caramel Tart with vanilla bean gelato that I've been dying to try but am always too full by the time dessert comes around. It was awesome. Also: $5 margaritas, in honor of Cinco de Mayo!

Checked out Cowbell for lunch the other day- was craving a burger. Fun place, good food. My only gripe is that they forgot to serve my starter (clam chowder) until after they brought out my burger. Chowder was good (I miss clam chowder) and the burger was excellent. Since that's their signature item, that's a good thing. 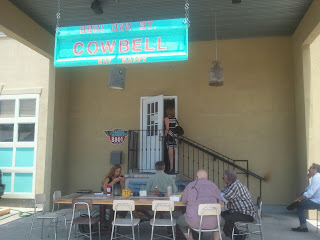 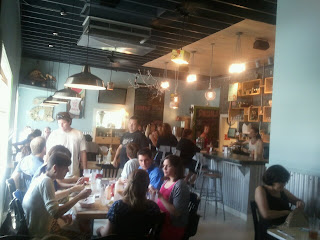 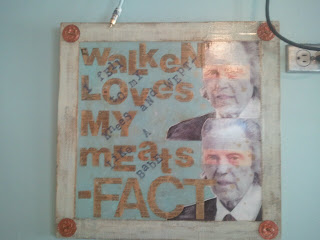 Trying to cook more frequently. Tom made me some of his amazing homemade chicken noodle soup on Sunday. Bought some merguez sausage at the Cochon Butcher and made merguez with collards and couscous, which was damn good. Gonna try to make some Cuban style black beans and rice over the weekend, a Cooks Illustrated recipe I've been wanting to try for a while now.

Did Pizza Delicious last night (mmm, meatball pizza with caramelized onions) and hope to get in to MVB's last service of the season on Sunday- I fear it will be mobbed beyond belief, however.

Good eating, as usual, here in New Orleans. Come get you some!
Posted by Nora at 3:53 PM