It was only a week ago, but the memories of Jazz Fest are already fading into a dream like haze- New Orleans has a way of infecting one's memories in this way.

The three days between Jazz Fest weekends at work were totally rough. Tom and I did go on a bit of a bender that Tuesday night at the Avenue Pub and then at Parasol's (I curse your smoothness and drinkability, Tullamore Dew Irish whiskey!) which made Wednesday even more rough, but what can you do.

Shook off my hangover in time for Thursday's Jazz Fest session, which was one of my favorite days at at Jazz Fest- I didn't do much of anything, and it was relatively uncrowded and laid back. Enjoyed some quail, pheasant, and andouille gumbo and spread a blanket under the Gentilly Stage tree and lay down and dozed, listening to Eagle & Hawk, New Orleans Bingo! Show, Amanda Shaw & the Cute Guys, and the start of Cyndi Lauper's set. In the shade it was cool, comfortable, breezy, and perfect... drifting in and out of consciousness, listening to music, feeling peaceful and happy... 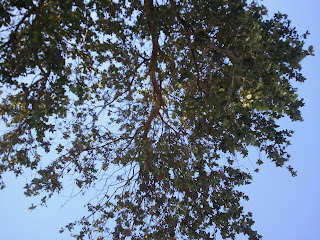 My wandering was minimal, but the pleasure of the day was quite high. I left a little early to go get Tom at work, as it was our anniversary, and I wanted to spend some of it with him too!

New Orleans Bingo! Show remains one of my favorite bands of the entire festival. I got one of their CDs and have been playing the holy hell out of it in my car over the past week. Got Cyndi's new CD too, "Memphis Blues" which is interesting and a little odd. Her singing voice doesn't quite say "bluesy" to me, but the music is fun, and the musicians backing her up are fantastic.

Friday, I was alone again. Another hot, sunny day- not humid, but the sun was blazing in the sky. I really wanted to try to set up in the Acura area, as there were a bunch of bands there I wanted to see that day, but seriously: I cannot hang in the Acura stage area or any of the other non-shade option stages (Fais Do-Do and Congo Square too). This is kind of a bummer, but honestly, there's so much cool stuff going on, having a limitation was actually kind of good, otherwise I'd be totally overwhelmed with too many choices.

I spent a lot of time trying to stay out of the sun (after I hung out a little bit at Acura watching We Landed On The Moon! - on a separate note, what is up with punctuation in band names nowadays?) and wound up catching back to back sets at my old friend, the Lagniappe Stage. Ingrid Lucia and Yvette Landry. Ingrid Lucia was sort of a Edit Piaf crossed with cabaret crossed with the blues. Interesting. Yvette Landry was simply kick ass. Singer/songwriter, great voice, good tunes.

I stepped out to go to the WWOZ Jazz Tent to see Leah Chase. She was fun- very traditional be-bop jazz vocalist, etc. Very nice and funny lady with a great voice. After a few songs, I got the wanderlust and decided to head back to the Lagniappe Stage to check out the Stanton Moore Trio, which I was intrigued by because it had a couple of dudes from the band Galactic, a local funk/jam band that had played the previous day on the Acura Stage (so I missed them, along with Lucinda Williams.)

I grabbed some of the pork/shrimp Vietnamese summer rolls on my way over along with a beer and WHOA, the Lagniappe Stage area was more packed than I'd ever seen it! I think it was a combination of the popularity of Galactic and people discovering a nice place to cool down out of the sun near some real bathrooms. Grabbed the first seat I could find to eat and drink, and then made my way around the crowd to find a place to be able to sit and enjoy. Which I did. I ended up buying a Galactic CD (which I loooooooove) but I think I would also like to buy some Stanton Moore Trio music as well.

I'd planned to stay in the Lagniappe to listen to the next musician, Alex McMurray, but when I went to the ladies room, the woman in line behind me enthusiastically recommended Eric Lindell in the Blues Tent. Intrigued, I went to check it out. Took a while to find a seat, the place was jam packed! And he'd started early so I missed the first part of his set. But it was good. Did not buy any of his CDs at the time, but that could easily change.

OK, then I had a truly epic decision to make: what show should I close out the day with? Arcade Fire was at Acura, Willie Nelson was at Gentilly, Irma Thomas and John Boutte were doing a Mahalia Jackson tribute in the Gospel Tent, and there was a New Orleans Klezmer show in the Lagniappe! I mean, seriously. Too much good stuff happening simultaneously!

OK, Arcade Fire was out because of its sunny location. I knew Willie'd be packed too, so the opportunity to find shade was limited. I decided to go to the Gospel Tent, because I hadn't been to any show there as of yet, and I knew I wouldn't get Tom in there ever, so this was my chance. Got there early to grab a seat. Listened to John Boutte (who was awesome) and witnessed the entrance of New Orleans' Queen of Soul, Irma Thomas. Stayed for a few songs, then decided that I really really wanted to see Willie Nelson, so I left the Gospel Tent.

Yes, Willie was packed. No, I didn't care. Maneuvered myself so I could see the stage and the video monitor, and listened to him play "City of New Orleans," "On The Road Again," and "You Were Always On My Mind," which is just about my favorite song in the history of EVER, and cried like a baby.

Then I decided to leave on a high note and took off.

Saturday, I had a very tired and grumpy Tom in tow (still awesome fun though.) I promised him that we would just settle down and chill out at Gentilly Stage in an attempt to recreate my idyllic Thursday Jazz Fest experience for him. Well, the fact that is was crowded and hot as hell meant that it wouldn't be an exact duplication. We did find some tree space, but it was space that needed to be adjusted with the movement of the sun, which we were able to accomplish for the most part till the very end of the day.

We'd take turns running out for food and drink. No beer today, but lots of water and lemonade and iced tea. Also sorbetto and mango freezes. And soup, oddly enough (the quail-pheasant-andouille gumbo for Tom and ya-ka-mein for myself) as well as lamb merguez (from Jamila's, which is now on the top of my to-go list) and my VERY LAST CRAWFISH BREAD OF THE SEASON (sob!). Also ran into a Mardi Gras Indian parade! (I cannot help but take pictures, the costumes are amazing and mesmerizing. Amazmerizing.) 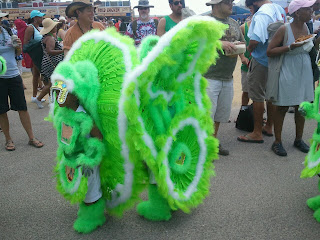 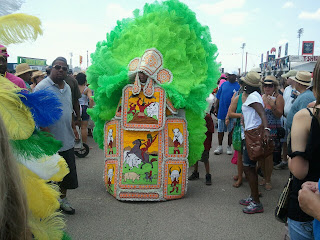 Music- super awesome. Shamarr Allen & The Underdawgs, MyNameIsJohnMichael, Trombone Shorty & Orleans Avenue, and the Strokes. All very different, all extremely excellent. Yay! Tom got to do some dozing, as I did between sets. 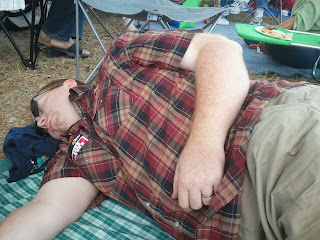 We left on Saturday evening tired, hot, dusty, and sweaty. Also with amazing Jazz Fest memories, even as they fade with each passing day, I will always remember the excitement, the joy, my Thursday solitude, the discovery of crawfish bread, and the many, many wonderful musicians that I heard and saw.

(If you're wondering why I'm wrapping up now, it's because I'd decided not to go to Jazz Fest on Sunday, assuming - correctly - that I would need a day to recover before returning to reality. At least "reality" is still in New Orleans, so it's not as rough as it could easily be.)

Next year, I'm not sure I would get the Brass Pass unless I found someone whose show days were opposite mine and we split it. But never say never!

There are some pictures trapped in my camera, which I will post when they are freed.

Damn, Jazz Fest and New Orleans. Why you so awesome? Until next year...
Posted by Nora at 2:24 PM