I think it's my New England upbringing that causes me to have a particular Fun Maximum which causes me to want to crawl away and hide after too much fun has been had. Went out on Wednesday evening, had to work late Thursday, and then Friday we made our usual Avenue Pub pilgrimage to enjoy NOLA Blonde dryhopped with Simcoe hops on cask, also a couple La Chouffes - had a Houblon - as well as the Harvistoun Ola Dubh, which is their Old Engine Oil black scottish ale aged in 18yr old highland whiskey barrels.

After we ate and drank at the Avenue, we went home and I had the great idea to bike down to the Hi Ho Lounge on St. Claude in the Bywater. I hadn't had the opportunity to bike since the previous weekend, and I was really itching to. So bike I did! Almost four and a half miles. Met up with my pack at the All Ways across the street from the Hi Ho had a drink, and then went back across the street to hear Ashton Hines and the Big Easy. 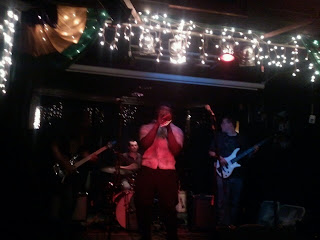 Was a short set, so we decided to go to Frenchmen and listen to them again at the Maison where they were playing a midnight show.

Biked over to Frenchmen and locked up the bikes when went for a wander- it wasn't even 11 so it would be a while till the Brawlers were on (and at that point, we didn't even know the half of it!) Kara and I popped into a Japanese bar/restaurant that wasn't heaving, and ordered a couple of beers and watched the VERY VERY SERIOUS DJ at work. Then right outside, I saw Holly's Hot Tamale bike cart rolling and I grabbed her and got me a pork tamale. Kara had a vegan black bean and garlic tamale which looked and smelled delicious.

Went back to the Maison to see what was going on, and saw the members of the band sitting outside the bar on top of their amps somewhat dejectedly. The previous band (Brass A Holics) was running late and they couldn't get in there to set up till they were done. 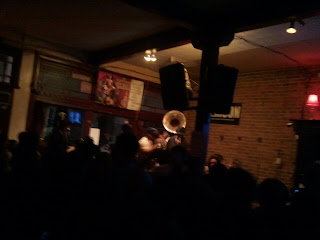 So we caught the last hour and a half of the Brass A Holics show, and once the Brawlers were on, we stayed for one song for moral support and then left. Rode home as a pack in the slightly cool New Orleans night.

Saturday: FRENCH QUARTER FEST! Tom and I headed out at around noon and biked to the Quarter- pretty much a straight shot from Camp Street and then we turned up by Felipe's and parked the bike. Walked up Royal, people watching and stopping at the courtyard steps to listen to Lena Prima (Louis' daughter) who was singing one of my favorite Louis Prima songs, "Buona Sera." Kept heading over to Jackson Square where I was determined to get my hands on some quality French Quarter Fest eats. 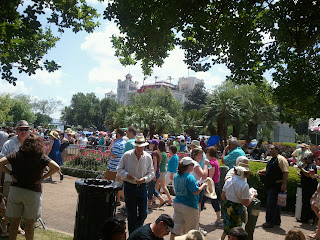 While Tom stood in line for Abita Jockamo IPAs, I headed over to the Muriel's booth to get some goat cheese and crawfish crepes. The crepes were filled with goat cheese and had a creamy sauce with crawfish tails spooned over it. Very delicious. Then we hit Broussards who had a puff pastry with crawfish sauce which was also tasty. 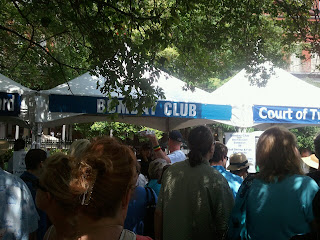 We found a shady spot to hang out and manage our cups and plates and forks and all that. Well satiated, we made our way around to the other side of Jackson Square and saw some seriously retro music stylings by the Victory Bells with the Victory Six- a WWII type of thing- Boogie Woogie Boys of Company B, Andrew Sisters, etc. It was all very wholesome. Less wholesome was the Hurricane I acquired from the Pat O'Brien's tent. My first Pat O'Brien's Hurricane. It was OK. Pretty boozy, sweet, and tasted like red. But cold and fruity on a hot sunny day.

I wanted to head over to Voluptuous Vixen (where I got my Zulu Ball gown) to check out their sidewalk sale- I acquired a couple of cool things- a knee length cocktail dress and a pair of capri pants which will be good for work in the warm weather. It took a while to get into a dressing room, but in the meantime we were plied with champagne and we used the complimentary hot pink cardboard fans to cool off. It was fun. Love those Voluptuous Vixens.

Heading back out into the frenzy, I wanted to pick up my WWOZ Brass Pass for Jazz Fest. We found their table near the French Market, and I got my beautiful, actual brass, brass pass. 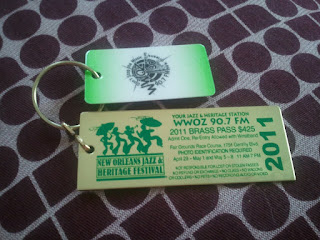 Then we went to the Gazebo Cafe for ice cream pina coladas. Cold, boozy, tropical, and delicious!

I knew the Rouses' hot crawfish boil was at the Old U.S. Mint, so we headed over there. However, since we still had our outside beverages, we wandered some of the French Market stalls while finishing up our pina coladas. We purchased some handmade soap from Kettle Moraine Soap Company and some cool stone coasters from Milk Studios. Got this one, can't find the others we bought. But they are very cool.

Got to the Old U.S. Mint, and caught the end of the Kora Konnection on the Latin/World Stage as we chowed down on Rouses' crawfish boil & fixins - potatoes, corn, and sausage (enjoyed with an Abita, of course). 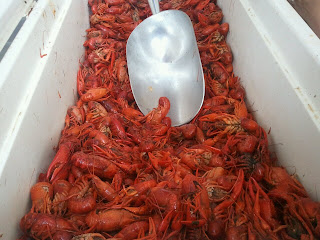 Damn good crawfish- best I've had since the boil at the Lower Ninth Ward Village a few weeks ago. The U.S. Mint has real bathrooms so we each took advantage of that and then wandered to the other side of the Mint and caught Ingrid Lucia.

After that, we went back to Voluptuous Vixen to pick up my clothes and have another large belt of champagne. Tried a few more things on from the sale racks, but no luck. Found ourselves at Pravda, where a couple of cool cocktails for me (Hendricks Gin, St. Germaine, and soda on the rocks) and a beer for Tom provided a nice respite from the sun and crowds. 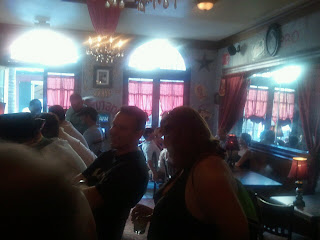 Headed back to Jackson Square, where we were able to get our hands on one more goat cheese and crawfish crepe each before the square closed for the evening. Well done, Muriel's! 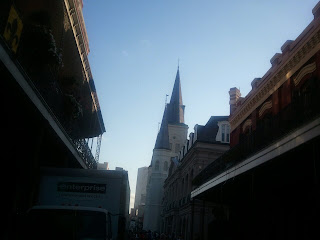 Today, I was in my pajamas until 4pm. Back to FQF? Nope. Go out to the Northshore for the Strawberry Festival? Oh hell no. We *did* leave the house to bike up to MVB at Slim Goodies for an amazing dinner- their Bun Mi burger (a burger with housemade pork pate, mint, basil, shallot relish, thin sliced cukes, and chili paste infused mayo.) GOOD GOD THAT WAS AWESOME. Also, their special gelato shake- a coconut mango thing with some passionfruit action and a fortune cookie on top.

In conclusion: Fun was had, until too much fun was had. Then lounging around in pajamas occurred. Hope everyone reached your own personal Fun Maximums!
Posted by Nora at 2:09 PM