Fetes and Bikes and Jedis, Oh My!

It's been a weekend of much fun and awesomeness. So much so that I'm almost too wiped out to recount it. But it was some good times so I'll attempt to stave off my nap in order to being everyone up to speed. YAY.

It was just a beautiful afternoon, perfect temperature, warm and sunny all weekend. Friday night: met up with Tom at the Avenue Pub, of course. After a couple of beers, we headed over to the Rendon Inn to get some of Kimmie's crawfish lasagna... but sadly, it was sold out! Sigh. We comforted ourselves with Kimmie's tarragon chicken salad and a Manhattan (for me) and the Best Fish Sammich Ever and a couple beers (for Tom.) After dinner and a quick stop home, we headed out to Tipitina's. There was a brass band showdown happening on both Friday and Saturday nights, but Tom actually wanted to check out the opening act, The Local Skank, a mostly all-lady ska with brass band band. 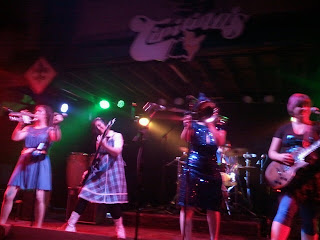 Did I mention Tom was at Tipitina's? A club? Willingly? So awesome. He even danced! Truly a magical night. We left after the band finished, too tired to stay for the main attraction (also, brass band music is not to Tom's tastes) and came across a dude selling jambalaya outside the club! Had to buy some, of course. Really worked up an appetite with all the skanking and dancing.

Next morning, we got up and decided to walk down to the Fête Française NOLA, an annual fundraiser for the Ecole Bilingue de la Nouvelle-Orléans, a local school. We shared moules frites and an apple tart, and drank the event's signature cocktail, the Joie de Vivre, which was Lillete (rouge or blanc), champagne, and orange juice. Also water and iced tea, 'cause it was super sunny and there wasn't much by way of shade. We wandered the silent auction area and I put a couple bids on things, but it was real early in the bidding so I didn't end up with anything. (I wasn't very invested.)

We decided to walk up a couple more blocks to a local bicycle store, Mike's Bikes. And we bought 2 bikes! So exciting. They're cruisers and I love, love, love them. I do not have any pictures but they are both Sun Revolution Cruisers, 3 speed, pedal back brakes. Mine is brown and blue, and Tom's is orange. Biking around the city is so easy and awesome, and also kind of addictive.

After we bought the bikes and various bike accessories, we rode home, yippee! We had idly thought of going to the Freret Street Festival, but we were pretty wiped out and wanted to get ready for the Drink For Japan Fundraiser at the Avenue Pub. After a debate on driving v. biking to the pub, we ended up driving over there, and sampled the Abita Black IPA cask and the Hitachino Classic Ale, which seemed to have been labeled as an IPA but it was a little dark and malty to be considered such, by my personal standard. Still very tasty.

We made our way home by way of Stein's where we picked up some beers and sandwiches to sustain us before going over to our friend's house (on our bikes, whee!) for a double feature of Star Wars and SpaceBalls. It was a very fun time. There were about 10 of us there, there was a drinking game in play that involved drinking whenever the Force was mentioned, there was mocking and geeking out and general fun times had by all. After we left, we joined Kara for a last beer (for us... don't know how many beers she had) at Pete's where we ran into some folks I hadn't seen for a while and also met some new people. We biked home sleepy and happy (not too sleepy though!)

Today was pretty errand-oriented. We used a Living Social coupon for Langenstein's Grocery Store, a quite old fashioned market (with ribeyes on sale for $9.99/lb!), also went to Rouses, the comic book store, and the most exciting errand, getting seedlings to plant and accessories to plant them in and with! We went to The Freret Garden Center and Green Parrot Nursery for plants, and Home Depot and finally Wal-Mart for containers. Surprisingly difficult to find plain plastic containers/pots. None of the garden centers had them (just terra cotta, if anything) and neither did Home Depot. But we were finally able to find what we needed at Wal-Mart.

After that, we didn't do much of anything except laundry and stuff till it was time to pick up our white pie (sauteed spinach folded into ricotta spread about the pie, a little mozzarella and cherry tomatoes) from Pizza Delicious.

Hope everyone else had great weekends... Next weekend brings French Quarter Fest and the Ponchatoula Strawberry Festival!

There's never enough time to do everything here, even for residents. Things I wanted to go to but couldn't get to: Freret Street Festival, Big Easy Brawlers show at the Dragon's Den, and Cole's Birthday (observed) at Twelve Mile Limit. Sadface! But I will persevere...
Posted by Nora at 4:18 PM