There are a lot of places in New Orleans that have a lot of hype. Either they're 100+ years old, or has "The Best [Fill-in-the-blank]" or, more often these days, are promoted in Food Network shows like "Diners, Drive-Ins, and Dives."

New Orleans has a lot of food culture and food tourism. Work through user-reviewing sites like Yelp or Chowhound, you'll see a lot of discrepancy between expectations and what's delivered. Even with places we like, there tends to be inconsistency of course. It's all to be expected, but it does make it special when we discover a gem of near perfection.

For us right now, that gem is Rue 127, a tiny bistro on North Carrollton just up from the Canal Street intersection. I hate to give it good press, because it is SO tiny: 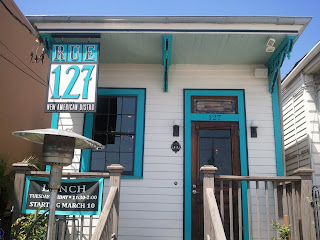 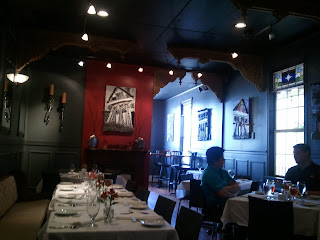 We had reservations, of course, because this place is so small I would imagine it almost impossible to walk in on a Friday or Saturday night and get a table. We were there on a Friday night, just after Mardi Gras. The place was bustling and I noted as we walked in that there was a banner hanging that proclaimed that they had just started serving lunch. Since it's right around the corner from where I work, I filed that away for the future (the future of tomorrow was today, but we'll get to that shortly.) We waited for a few minutes while they were resetting our table and then we were seated.

Tom had been looking forward to this because of the promise of excellent mussels- but he was also prepared for disappointment. However, these mussels - prepared with garlic, white wine, shallots, and herbs - did not disappoint. He was thrilled by the quality of the mussels as well as the gentle steaming of them. The flavors were classic, simple, and delicious. Small quibble: the mussels were served with Parmesan frites, which were OK, but not awesome, and Tom prefers to sop up the cooking broth with bread. Very minor nitpick, though- he was thrilled with the mussels.

I had the mushroom risotto which was somehow hearty and delicate- rich umami comfort food.

Our mains were (for Tom) the grilled diver scallops, served with sour cream whipped potatoes, roasted fennel, oyster mushrooms, and an orange emulsion. I had the citrus glazed duck breast with caramelized fennel, potato puree, orange supremes, and a Louisiana citrus jus. The duck was outstanding- beautifully cooked and the citrus notes were again, delicate and subtle, calling to mind the classic duck a l'orange without actually going down that road. Tom's only issue was that his dish was slightly overseasoned- still delicious, though. And I am pleased to report that Rue 127 is one of the few restaurants I've gone to lately that has salt and pepper shakers at the table! Without asking and seeming like some primitive rube who doesn't have the proper palate to appreciate the chef's vision or some such.

We shared their toffee pudding for dessert, of course- if it's on a menu, Tom is going to order it. It was a really lovely meal. Service was also very good. Yay!

Today, I was feeling back up for having a nice lunch (I really hadn't been for a while) so I went down there from work. I was there by myself, and I made a reservation, just in case it got mobbed up. It was actually pretty relaxed- a 2-top, a 3-top and a 9-top. And me in the corner, taking pictures of my food and reading the internets on my phone.

First course: their duck, smoked turkey, and andouille gumbo, which is served with a horseradish potato salad in the middle. This is a fairly common gumbo experience, and I like it. Gumbo? Good. Potato Salad? Gooooood. It was tasty and flavorful. At first, I thought the horseradish in the potato salad would overwhelm the gumbo, but it actually melded more as I went along. 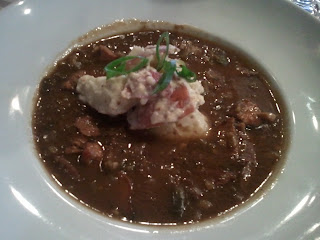 For my second course, I decided to try a French classic, often attempted and often botched, the Quiche Lorraine. This was not a fritatta in a crust, which is usually what quiches end up being. This was an amazing, elegant, silky egg and cream custard with Gruyere cheese, bacon lardons, and onion confit. (Though, I didn't actually taste the onion confit- it may have melted into the background.) The crust was crisp and light and butter and flaky. It was simple and beautiful; rustic yet elegant. The quiche was accompanied by an astringent fennel and grapefruit salad with frisee. It was the perfect counterpoint. 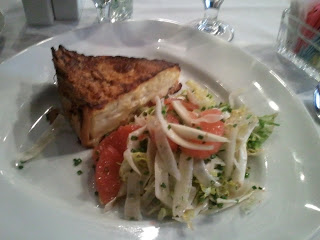 I decided that I needed to try some dessert- I still had a tiny bit of space in my stomach left before I would burst, after all. I decided, to the delight of my server, to try their (in)famous deep fried cupcakes that comes with three different dipping sauces: a vanilla creme, a butterscotch/caramel, and a deep dark chocolate. 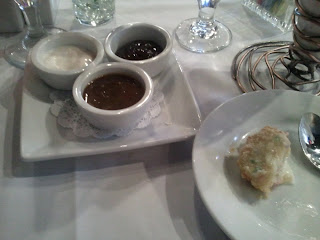 I dunno how they fry that cupcake up with the icing, but by god, they do it. Five mini cupcakes come in a standing basket. The vanilla creme is a surprise- it tastes like it has a fruit flavor in it; the butterscotch is wonderfully complex; and the chocolate sauce is less a sauce than somewhere between a sauce and a ganache, and that I could have just licked clean.

Looking forward to my next visit already...
Posted by Nora at 1:57 PM