After picking Berit up from the airport on Thursday and chatting while battling horrendous traffic, we got to the Quarter and parked the car. To my surprise, I had inadvertently parked within a block of the Chart Room, which is where we were headed. This has happened to me before in New Orleans- I'll look up and through no effort of my own, will be in front of wherever it is I wanted to be. It's hard to describe right but it's pretty funny. And magic!

Ah, the Chart Room. Man, I love that place. Berit was reveling in the lack of smoking bannination and we met Tom there to suck down a few Abita Ambers before dinner. It was a beautiful night, a little warm in the bar, and the beers went down nice. The bartender decorated one of our beer bottles with Mardi Gras beads: 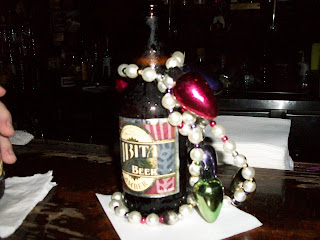 Afterward, we went to Iris for dinner- it was quiet there and service was very unhurried. I had a couple of their cocktails that didn't appeal to me much- one had too much licorice flavor (the Western Disguise with Oronoco Rum, Well of Wisdom Sake, Campari, Pineapple, Soy, Sweet Basil) and one was extremely bitter (the Sundani Sail with 10 Cane Rum, Batavia Arrack, Strawberry Gastrique, Orange, Lime, Rose Syrup, Orange Flower Water.) Ah well, no guts, no glory. I like the cocktail program they've got over there so I was glad to support it. I only wish I'd enjoyed it a little more.

First courses: Berit had the raw oysters (3 Gulf and 3 Malpeque) and I had the veal sweetbreads, which was probably my favorite thing the entire meal. They were flat-out excellent. Tom had their Lamb Sausage "Merguez" (which was in quotes on the menu.) He really enjoyed it. I didn't taste it because I know how much he loves merguez and I didn't want to deprive him of any of it.

Main courses: Berit had the veal shortribs, I had the duck breast with house cured bacon and brussel sprouts, and Tom had the lobster and crab soup (he had 2 courses from the appetizer menu. I enjoyed my meal but for one nitpick- the duck was definitely overcooked. Medium well, instead of medium rare. I didn't make a fuss because it actually still tasted really good and was surprisingly tender.

We also had dessert- I had the poached pear filled with awesome creaminess and with a delicious ice cream; Tom had the satsuma sorbet; Berit had the chocolate pot du creme. The pot du creme was incredibly chocolate but barely sweet at all. It was really interesting. I wish I could remember the flavor of the cream that stuffed the pear as well as the ice cream- they were excellent.

The next morning, we got up and I was moving a little slow. Why? Because of course we went to Pete's after coming home from the Quarter. But we needed to press on.

We drove out St. Claude and stopped at the Cake Cafe for a small nosh before heading to the Lower Ninth Ward Village (check out their new Building Fund Drive!) to introduce Berit to Mack, a necessity for all my visitors! It was a beautiful, beautiful day- we sat outside and ate our pastries and drank our iced tea and lemonade and admired the dog at the table next to us. We even saw the Cake Cafe cat, which made Tom's day. The cat was awesome- just curled up on one of the chairs at a table, not paying any mind to the chaos around him.

After we admired all the upgrades to the Village facilities and Mack hypnotized Berit for a while, we said our goodbyes and drove off to the Warehouse District to have lunch at Restaurant August. I had a Gin Julep which was excellent, and the three course prix fixe. I had the brussel sprout salad with house cured ham, the stuffed shrimp with mirliton, and the meyer lemon tarts with strawberry ice cream. Other dishes enjoyed at the table were the pate plate and the grillades and grits. Tom had a weird dessert- a ricotta custard of some sort that had a dressed salad of microgreens of some sort? Had some honey and candied nuts as well, those he enjoyed. But... that was definitely strange.

Did I mention I got ROCK STAR PARKING for Friday lunch on a beautiful afternoon near the Quarter? I AM A GOLDEN GOD!

Ahem. Anyway. We drove over to NOLA Brewing in order to catch the tail end of the tour (i.e., the drinking and chatting part.) We both drank and chatted and had a great time. Still had some time to kill before settling in at the Avenue Pub to watch Oshun, so we went to Magazine Street and walked around. I went to Fleurty Girl and got myself a Mardi Gras headband and boa so I'd be somewhat gussied up for parades. We also got our Heinerbrau Kolsch in the can at Breaux Mart.

Finally, we were in fine form to go to The Avenue Pub! We got there shortly after the Balcony opened and snagged ourselves a table out on the balcony. There was delicious beer and it was a gorgeous day. 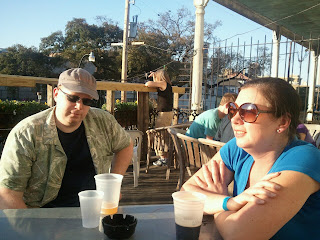 Finally, after a couple hours of enjoying the day and watching the setting up of St. Charles, Oshun began! And it was glorious. Bands and dancers and colorguards in between beautiful floats that had people tossing beads and other treats. I can't describe it- but it was so much more fun than I ever thought possible. Like Berit said: "Now I GET it." 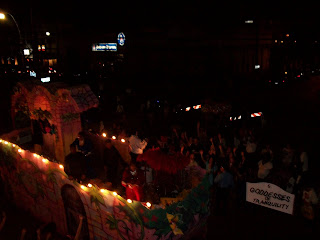 After the parade ended, we went to dinner at Lilette, which was very nice but by that point I was about to faceplant in my food. Had a cocktail, some butternut squash soup with lardons and creme fraiche, and their version of braciola with grits and red gravy, most of which I took home with me. The dessert menu looked great, but there was no way I could keep my eyes open for another course! I barely remember what Tom and Berit had.

Then home to bed. Stay tuned for reports from Saturday and Sunday! More parades, more food, more drinking, and crawfish Thunderdome!
Posted by Nora at 2:48 PM