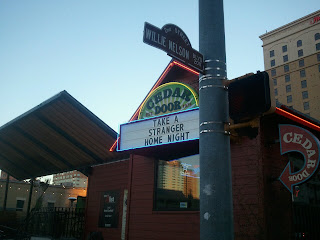 When our friend Liza picked us up from the airport and drove us into downtown, she told us about an Austin-tatious bumper sticker which annoys one of her friends to no end: "What's Your Hurry, Man? You're already IN AUSTIN!" Having had the opportunity to lounge around Austin in a variety of locales, I can see the appeal of slowing down and sticking around once you find yourself there.

We hit the Texas Chili Parlor for breakfast/brunch. Liza and Tom both had the migas with chili on top: black bean and Elgin sausage chili for Liza and the house mild chili for Tom. I decided on enchiladas instead but still topped them with chili: the white chili with pork and hatch chilis. Mmmm, enchiladas. Mmmm, chili. Mmmm, Shiner Bock. Great first meal in Austin. 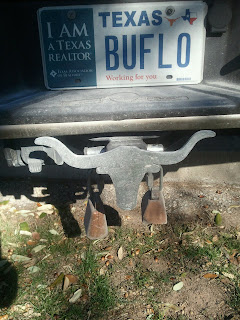 I played around with my new phone while in Austin and I "checked in" at a whole bunch of places on Facebook- and thank god, because since it's taken several days to start this entry, it helps me remember what was done where.

Man, the weather was just gorgeous.

OK. Then we drove around a bit and ended up parking on Sixth Street and walked down to Little Woodrow's for a couple beers. We shared a pitcher of Fireman's 4 from the Real Ale Brewing Company out of Blanco Texas and then I tried another local IPA which I cannot for the life of me remember the name of. Was good though. 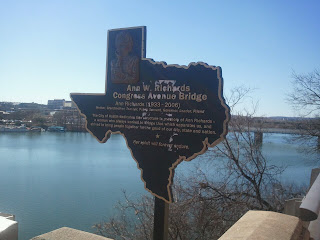 Wandered to South Congress Street (SoCo). When I say wandered, I mean, hiked! We had quite a haul through downtown Austin on foot. But it was awesome. Had a margarita at Guero's Taco Bar, a chicken "cone" at The Mighty Cone, one of Austin's many food trucks, and a slice and a beer at HomeSlice Pizza.

After going back over the bridge back to the car, we had a bit of a siesta and then went out to dinner. We checked out The Good Knight but it was pretty crowded, so we went to The Brixton down the road for a pre-dinner drink. When we returned, we got seated and I had a couple of very nice cocktails: the eponymous drink, The Good Knight, which had rye, paula’s lemon, sweet vermouth, and bitters and then an Aviation (gin, lemon, crème de violette, luxardo maraschino). I also had an amazing curried lamb shepherd's pie. Everyone else at the table had the meatloaf.

The next day (after breakfast tacos at Torchy's) we went to the LBJ Museum- Liza works there so we got a bit of an insider tour. I really enjoyed the official and unofficial tour. Then we drove out to "Hill Country" which made it sound like we were gonna get attacked by trolls or whatever, but apparently where the best BBQ is. We drove out to Luling to go to City Market BBQ, but it was closed! We headed back to Lockhart to go to Black's, which is a family run institution around those parts. Some of the best BBQ I've ever had: sausage, brisket, ribs, chicken, tons of sides, jalapeño cornbread, sweet tea, and some old school live honkey tonk (???) for entertainment. An excellent Texas moment. 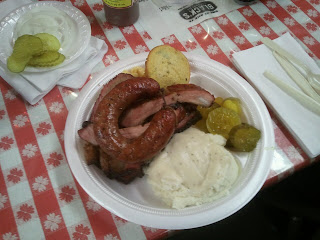 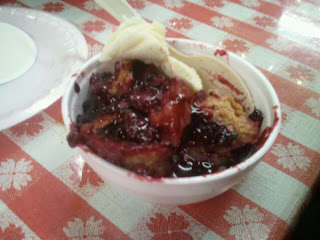 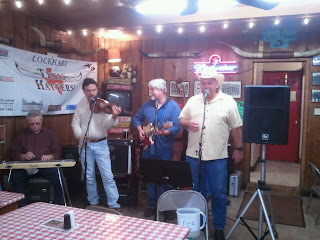 On the way back home we stopped at the Mexican flea market, and drank a few Tecates while wandering around admiring various stalls with used furniture, electronics, birds, illegal live fish, a chance to see the legendary chapacubra, vegetables, dried chilis, car floor mats, and the like. We picked up some Mexican sugar and candied pumpkin and sweet potato. Saw some small children with large turkey legs as well as spiced up corn on the cob. If I hadn't just eaten my body weight in BBQ I'd have been all over that.

For the evening's entertainment, we went to have burgers and beers at Casino El Camino and then ice cream at Austin's venerable ice cream chain, Amy's. (warning: wack Flash action). 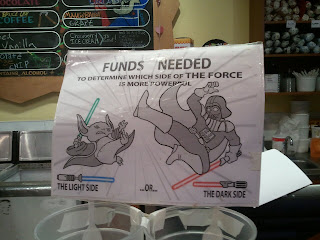 This was a lot of info in one entry- it's a bit more travel-book style than I like. But I did want to commemorate my Austin trip, as short as it was, because it was a really fun place to be, with awesome food to eat and many many places one can get your Texas sized drink on. I recommend!
Posted by Nora at 5:03 PM