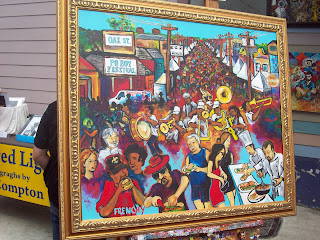 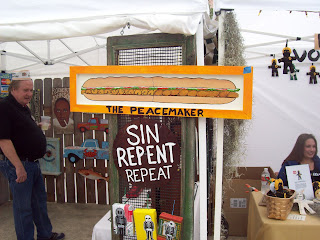 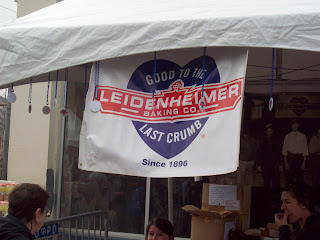 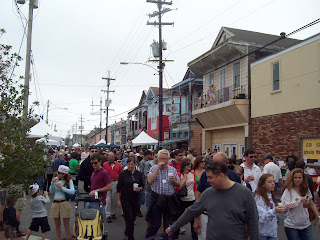 Today was the long-awaited Po-Boy Festival on Oak Street in Carrollton (Uptown.) We headed over there early to get a decent parking spot- got there around 10:30 and sacrificed a tire while parking on Plum and S. Carrollton- there was a metal covered curb that was jutting out and it poked a giant hole in the tire. Since we were early, and had our parking spot, we just got down to business and changed the tire.

Once the donut was on the car, we wandered to Oak Street pretty much at the dot of 11am to start eating po-boys and drinking beer. Mmm, New Orleans breakfast. A couple places that I really wanted to try- Dante's Confit Pork Cuban or Boucherie's BBQ Shrimp - weren't up and running yet, so we wandered a little further down to Barcelona Tapas and tried their Spanish-style pork loin medallions and gouda po'boy. Delicious!

Next, we tried a sesame shrimp po-boy from some place I don't remember. Also delicious- freshly fried and hot and sesame-y. We also acquired a couple LA-31 beers to wash our po-boys down.

Stopped at Hubig's- Tom got a pineapple and I got a peach. Ooh, that's still in my purse, be right back. 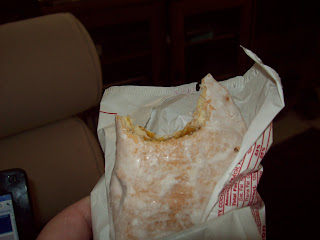 OK, that's tasty! Hubig's is a local pie company that is based in the Marigny. You can find their pies everywhere around here- supermarkets, gas stations, Walgreens, etc. And also at the Po-boy Festival, happily enough. 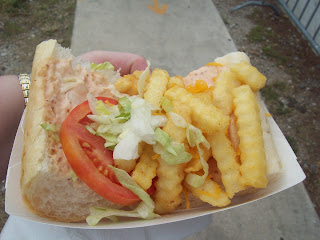 It was OK. The fries were cold and I did not detect any spiciness.

Next up was Emeril's Delmonico and their "Confit pork cheek po-boy with dirty rice aioli and southern-style cole slaw" which was pretty freaking tasty. 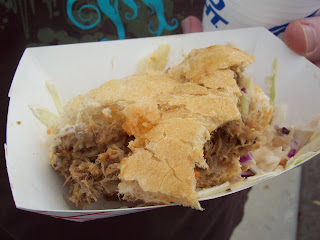 I dribbled my T-shirt up good with that aioli. I acquired a new T-shirt, the official Po-boy festival shirt:

I didn't change into it because I figured there was a good chance I'd dribble something on that too.

Tom found his po-boy nirvana- a smoked fish po-boy from Grand Isle with fresh veggies, pickled onions, and herbs. It pleased him greatly. 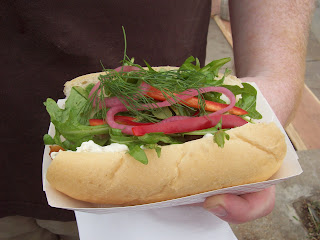 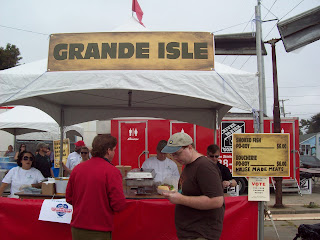 I got in line at the Palace Cafe tent for the smoked duck po-boy with citrus jalapeño marmalade. After I bought it, I realized that I was super full to bursting with po-boys so I just carried it home. I ate it up right before I ate my Hubig pie while writing this entry. Man, that was some good eatin' today.
Posted by Nora at 2:41 PM