To celebrate my return home from New England, we went to Dick & Jenny's on Tchoupitoulas. It's one of the few places that doesn't have a lunch service, and we don't have a Groupon/Living Social deal for it, so we haven't been till tonight. We wanted to go for Tom's birthday, but it was closed on Labor Day.

We were ushered through an empty waiting area and small dining room to the main dining room, which was warmly decorated and comfortable. There was a bar and a healthy number of tables occupied for a Monday night. Our server was really friendly and helpful.

We started with cocktails: Tom had a "Hemingway," which was basically a very well made classic daiquiri. I had something that I think was called a Porch Swing, which was Pimms and St. Genevieve muddled with cucumber, served in a Mason jar. (I actually had 2 of these.)

For our first course, Tom had the gumbo du jour- andouille and smoked chicken. Had a bit of a kick to it! I had the pain perdu with duck confit. It was pretty light but excellent flavors- a perfect first course. Came with sliced apple and a peach chutney, and the confit and brie were melted between 2 slices of baguette.

For the entree course, Tom had the "Vegetarian Dagwood Panini" which had roasted red pepper, grilled turnip & eggplant, sauteed spinach, and smoked sundried tomato spread on herb foccacia. I had the BBQ Buffalo Short ribs, although they were actually elk short ribs, served with a lovely mac & cheese as well as smothered greens. It was great- the elk is leaner than, say beef or even buffalo. The ribs were still cooked to tenderness, but the reduced fattiness gave it a cleaner and lighter taste- not as rich as I've sometimes found beef shortribs to be.

After that, we had no room for dessert (though I was tempted by the chocolate malt creme brulee!) so we paid the tab and left. On our way out, we stopped to chat with one of the owners? managers? and she told us that they were going to start doing weekly lunches Tues-Fri.. YAY!

Man, I am so glad to be home. My trip up north was somewhat fraught with emotional pitfalls, but all were skillfully navigated, I think. Just plum wore me out. I did see a bunch of folks, went to Gargoyle's Disco Brunch (thanks, Ellen!) dealt with condo stuff, visited my grandma in the nursing home, went to a wedding, and couch surfed and drove all over the place, not staying in one place for very long. I did stay in a crazy new Starwood Property in Lexington (MA) though- "Aloft" by W. It was pretty nice, though it tries WAY too hard. However, that's a quality I don't mind so much in a hotel (better than the opposite, I suppose.)

A couple pictures from the wedding I went to:

Where they held the ceremony: 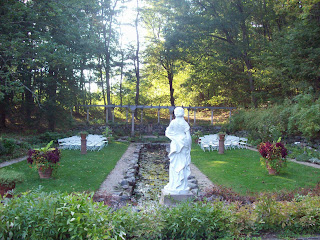 The happy couple, from the back to protect their privacy! 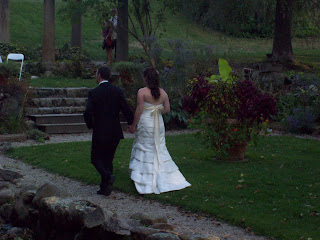 I would like to stay in one place- home in New Orleans - for a while now that my travel schedule has played out. Here's hoping! Coming back to a beautiful day like today- sunny, clear, breezy, with highs in the low 80s - made that wish even stronger.

Back to the office tomorrow- I am SO not ready. Ah well!