I hate to bump the plea for The Village down the page, but we have had some very nice meals recently.

On Tom's birthday, we got up at 4:15am and flew from Boston to New Orleans via Miami. That part wasn't so fun (though god knows it could have been worse) but then after we got home at around noon, greeted the cats, and napped, we decided to go to Coquette for dinner. It was close, we knew we liked it, and even though it's in the neighborhood, it's nice enough to be a "special occasion" kind of place.

We started with a couple cocktails: I had the Coquette Collins and Tom had the Twelve-Mile Limit, a prohibition-era cocktail whose name comes from being able to sail out to international waters and get loaded and marry a cow, if you so desired. The cocktails were awesome, as usual.

We decided to get the 4 course chef's tasting menu and to share a wine pairing. The first course was a rabbit rillette that came with toast points and a sour cherry marmalade, coarse mustard, cornichons, and an eggplant tapanade type of thing. The rabbit and the condiments were all amazing. It was served with a sparkling rose, which I enjoyed.

Second course was a scallop course served with a French Chardonnay and the third course was a simple but delicious flatiron steak with grits and some sort of awesome sauce. That came with a Spanish Tempernillo, which was right up Tom's alley. For dessert, the tasting menu had one of my favorites that they do, a chocolate pot de creme with freshly made beneigts to accompany it. YUM.

Today, for lunch, we went to Crescent Pie and Sausage to use a Living Social deal that we'd gotten a while back. It's in Mid-City, so I was able to point out my new office location to Tom and impress him with my knowledge of the Mid-City streets. Tom had the merguez lamb sausage, of course; he's crazy about merguez and is compelled to order it wherever he sees it. It was pretty damn delicious, especially with the accompanying harissa. I had their "Cuban Calzone" which was their crispy pizza dough wrapped around meltingly tender pork shoulder, house cured coppa, house made mozzerella, pickles, and topped with a mojo sauce. OMG YUM.

Apparently our server lost our order ticket, and pleased me to no end by choosing to announce this with a round of complimentary beers. Service win, for sure.

Now it's pouring outside, and dark. We are thinking about returning to The Avenue Pub this evening after our night out there last night. We got into the mug club there and were able to get our special mugs! So exciting.

Here it is, filled with Stone Sublimely Self-Righteous on cask: 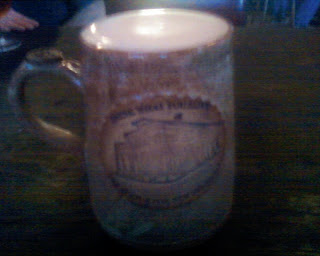 Oh, and I didn't take any pictures of our food at Coquette, because it was Tom's birthday and he kind of hates it when I do that, but here's a picture of a stunning lunch I had a couple weeks ago at the Parkway Bakery & Tavern- a french fry poboy dressed with gravy. GENIUS! 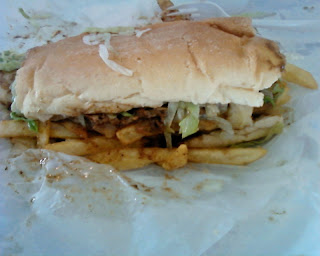 Also, bonus pictures of Tom and I at the Avenue Pub for the Gulf Coast Fundraiser/Silent Auction a couple weeks ago- check out Tom actually smiling! 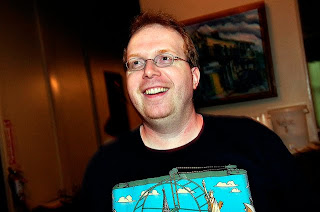 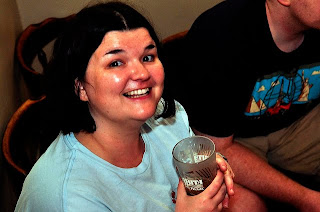