Took the kitties to the vet this morning, to start. Poor guys- such indignities! Indignities further compounded when the A/C repair person came in and invaded their space.

Post-vet, I checked out the farmers market, but late. By the time I got there a little after noon, all I could scrounge up were hot peppers, milk, cornish hens, guinea hen, 2 tarts, and juice. Was fine, though. Cruising all the way up Magazine Street at lunchtime is not the quickest way to get to you destination, but it's an interesting ride.

In the evening, we attended the neighborhood National Night Out Against Crime event. We were at Burke Park, the one that I'm working to get volunteers to build the KaBOOM! playground later this month. I manned a table with info to recruit volunteers. There were hotdogs, chips, oranges, apples, and gelato from our local awesome gelateria, La Divinia. It was hot and sticky and the cicidias were screaming. Neighbors and cops and kids and neighborhood soccer teams wandered around, chatting, shooting hoops, wiping the sticky ice cream dribbles off our faces and hands. It was summer in New Orleans.

Tom actually picked up the gelato and dropped off the leftovers and the cooler they came in. He also trucked back to the house twice to bring by ice cream serving spoons and trash bags. Thanks, sweetie! Good work.

I got a bunch of volunteers signed up, came home, watched White Collar, ate pie, and added the RSS signup widget for this blog- you can see it on the top of the left hand side of the page.

For anyone local (or folks who plan on visiting next week) who reads this blog- La Divinia on Magazine Street will be donating 20% of their proceeds for Wednesday, August 11 to the Irish Channel Neighborhood Association, so head up Magazine Street and have some amazing gelato!

Plus a picture of the cats, for good measure (since they had a tough day today.) 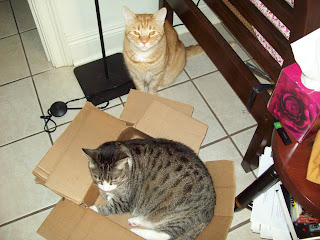