We had a nice mellow weekend. We slept in both Saturday and Sunday, and on Saturday afternoon, we went uptown to use our Vom Fass Living Social coupon. Vom Fass is German for "of the cask" and their thing is that they have oils and vinegars in casks, which are dispensed into whatever bottle size you want- they price everything by 100ml, so you take it from there. We got 2 250ml bottles of different olive oils and 100ml of truffle oil and 100ml of ginger sesame oil. They had all sorts of different infused oils, nut oils, and seed oils in addition to about 8-10 different extra virgin olive oil varieties.

They had a wall of vinegars as well, but we are doing well vinegar-wise, as we still have like 3 bottles of nice stuff from our CA trip.

They also have booze and wine for sale! Those come pre-bottled though. But you can get the booze in different sized bottles, which is handy for the pricey stuff.

En route to Vom Fass, we stopped at Hansen's, where I got a satsuma/rasberry (NO condensed milk- was too hot for it somehow) and Tom got a strawberry/vanilla bean. We got the special Swampitoulas cups that support funding coast preservation. Oh, I also committed a real faux pas no-no; I absentmindedly touched a syrup bottle on the counter trying to read the name of the flavor. Ooh, I got in trouble! But was forgiven. Won't do that again EVER and I suggest to all my readers that you don't either.

After sitting and eating our sno-blizzes outside in the heat, we went to the bookstore across the way- McKeown's Books. I got the second book in the Poppy Z. Brite New Orleans restaurant series- autographed- as well as a Jasper Fforde book and an early paperback printing of a Robert B. Parker Spenser book.

In the bookstore mood, we went next to Octavia Books, which is uptown on the corner of Laurel and Octavia. In a funny coincidence, I knew exactly where it was, not having ever been there, because on my way up to Whole Foods this past Monday, I saw a line of Saints fans wrapped around the block (out to Jefferson, which was where I was driving) to get Drew Brees to sign his autobiography for them. I looked it up, and worked out where the store was. So when Tom asked if we could stop there, I was all, no problem! It's a really nice store- I think it will be our go-to local bookstore from now on.

OK, then we went to Vom Fass, and had a very enjoyable experience there... then went to Dixie Bee juice bar for some smoothie/slushee action. Tom had the Mango smoothie and I had the Watermelon Slushee, with watermelon, pear, and something else excellent. So refreshing!!

Came home with our haul of books and various oils, and I made this recipe for pasta with quail sauce. Was awesome! here are a couple pictures of the prep (note the very limited use of aromatics- just a couple teaspoons of each): 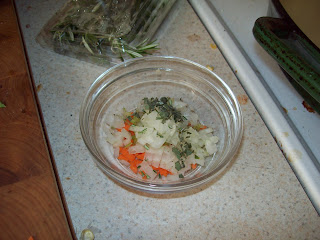 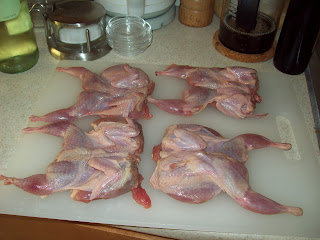 I sadly did not get a shot of the finished dish, but let me assure you, it was NOM. Poor cats were going crazy though with Tom picking the quail meat off the bones, though.

After that, we went to the Rusty Nail for a fundraiser/silent auction that the local adult kickball league was holding for the Roots of Music (Note: we do not belong to the league, but know people who do.) That was fun. Had a couple beers, I had a frozen saki lemonade, and we sat outside in the very warm night. We acquired a gift certificate for a local hair place and a hotel night at a place near the casino. Also acquired: a parking ticket! Which was, frankly, bull. So, boo.

Today: dawdled and missed breakfast time, so had lunch at the Marigny Brassierie. I had the grits & grillades, and Tom had the meatballs with red gravy and penne pasta. It was pretty good. I also had a French 75 while Tom enjoyed an Abita Restoration Pale Ale. We wandered down Frenchman Street, but in the light of day, it didn't look as fun as it is at night.

After coming home, I made a shopping list for Sunday Night Fried Chicken and Monday's Red Beans & Rice. I made fried chicken, smothered greens, and cheesy spoonbread, all out of Donald Link's book. Was yummy! 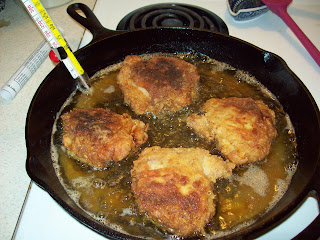 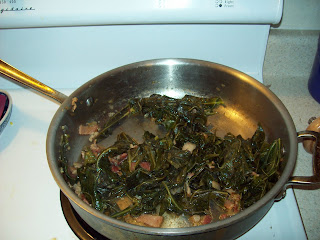 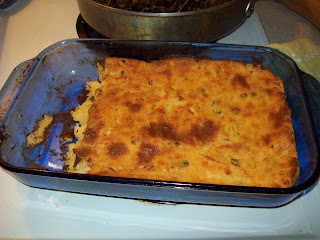 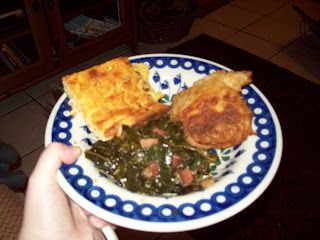