Have Job, Will Celebrate

So... I went out and got me a job type thing! This will be cutting down on my Ladies Who Lunch lifestyle, but seriously, I was spending way too much time with my cats (stay tuned for a photographic collage of Taz nomming on a catnip toy on Flickr! For like... TWENTY PHOTOS!)

The job is very cool, it's running an office of a small nonprofit here that helps neighborhoods and communities in very concrete ways. Exactly the kind of work I was hoping to do when we moved here.

So, I wanted to CELEBRATE with my last lunch of FREEDOM, which I did yesterday with my husband. Did you all know that Restaurant August serves a three course lunch every week day for $20.10? And that it's awesome? No, REALLY REALLY AWESOME? August was the one place I really wanted Tom to join me for lunch, so I'd been looking forward to eating here since... we moved here I guess. Or even since Christmas, which is when we first dined at August.

We get there, I order a glass of wine (some Chenin Blanc from Napa) and Tom orders a Heiner Brau Kolsch. We are soon presented by John Besh's signature amuse bouche, an egg shell with a fish custard and sabayone, with caviar on top and a little brioche "soldier." 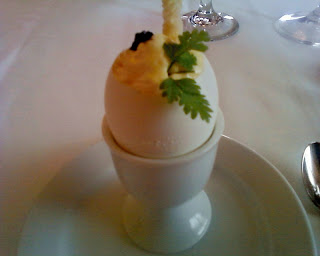 For our three dishes, mostly all I have to share is the description from the menu and the pictures I took. I made a lot of Homer Simpson-esque drooling noises (quietly- it's a fancy place!) so I can assure you that everything was excellent.

I had the "gulf shrimp potstickers and heirloom tomato consomme with young okra and pineapple." OK, I lied, here's an editorial comment: tomato and pineapple were quite interesting and a brand new flavor profile for me. I've been primed by eating several variations of late of practically ubiquitous tomato and watermelon combinations- salads, gazpacho, etc. So this was not nearly the shock to the system that I thought it would be. It was weird, but good. I love it when food surprises me like that. 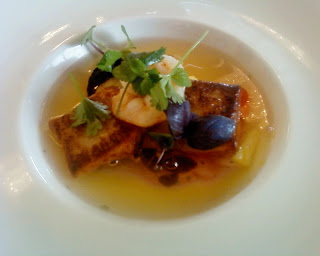 Tom "I Less-Than-Three Figs" got "celeste figs with house made lamb Panchetta, local watercress, spiced pecans, and house made ricotta." Yum. Lamb Panchetta?!?!? YES PLEASE. WHERE TO FIND FOR MY OWN PERSONAL SNACKINGS??? 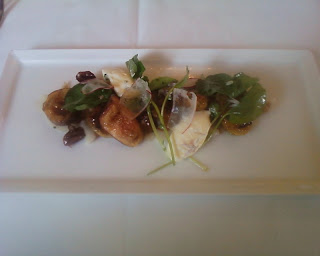 I had the "slow cooked pork belly with McEwen's grits." Sounds straightforward and delightful, and it was. Though it also came with some tomato sauce which was sweet and light and fruity. 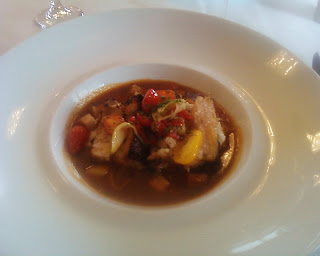 Tom had the "jumbo gulf shrimp and okra stew with heirloom tomatoes and spicy pork sausage." It also came with an excellent risotto that wasn't mentioned on the menu but was much appreciated! 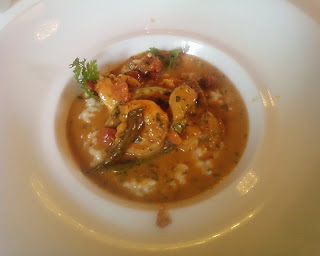 I had the "milk chocolate pot de creme with cocoa nib cream, dark chocolate, and almonds." The dark chocolate and almonds were referred to by the server as an "almond salad" which was an interesting way of putting it. Tasted awesome though. Nice amount of saltiness in the "salad" as well as in the pudding part. Chocolate + salt is one of my favorite flavor combinations. 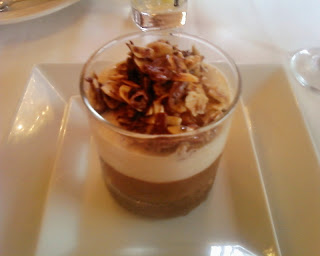 Also, because talking about chocolate + salt made me think of Chef's chocolate salty balls from South Park, here's a little of that salty chocolate action for ya.

Mr Fig ordered the "belle econce farm chevre with grilled celeste figs, toasted brioche, and alepo honey." It was like a little grilled cheese with figs in it, topped with honey. Nothing wrong with that! We ordered some french press coffee to accompany our dessert, and I declined a second glass of wine before my main course in favor of a glass of iced tea- which, while delicious was notable mostly because they brought out a little pitcher of simple syrup with which to sweeten it! I mean, come ON, that's awesome!

They brought us homemade peanut brittle and chocolate truffles with the check. It was the kind of meal that you're glad you have a blog to babble about it on.
Posted by Nora at 10:02 PM