haunted by the Leidenheimer bread truck! 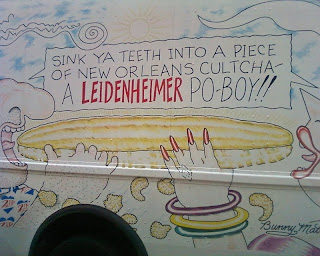 Today I first saw it when it was making a delivery at the Freret Street Po-Boy and Donut Shop. I myself was minding my own business and eating a delicious breakfast sandwich- scrambled eggs, cheese, and smoked sausage on a gorgeous buttery housemade biscuit. Probably the best breakfast sandwich I've had since I moved here! (I am not denigrating the quality of breakfast sandwiches here, I am holding this particular sandwich in high esteem!) I also bought a chocolate frosted donut, which is OMG STUPID DELICIOUS. I wisely (???) waited till I got home to eat it, otherwise I would have bought another 20 after having that first bite.

Then, after I continued down Freret all the way to South Carrolton, just for a wander, before heading back home via St. Charles and Prytania. As I crossed Magazine Street on First, I saw the same truck making a delivery to the Magazine Street Po'Boy Shop. At least I resisted the urge to yell out, "THANK YOU LEIDENHEIMER DELIVERY GUY!"

So, let's see. What has been happening in the non-condo, non-cat, non-television world over the last couple days? Well, last night, Tom and I went to Eatventful's inaugural networking event at Capdeville in the CBD. It was nice. The organizer was wonderful, and we met a few really cook people and had some great conversations. There was less eating at an event that bills itself as an "Eatvent" but it was a lovely time. We stayed afterward to have some of the food on the menu. We ordered a few things to share- the pulled pork sliders, the fried red beans and rice balls, and the chorizo and manchego french fries. I had several specialty cocktails there- the Lady in the Dark (Plymouth Gin, Canton Ginger Liqueur, Lemon Juice, Sugar), the Jacks' Black Lemonade (House Infused Blackberry Jack Daniels, Fresh Blackberries, Sugar, Lemonade), the Champagne Julep (Rebel Reserve, Mint, Sugar, Princess Sparkling) and a lovely French 75.

So I'm feeling pretty subdued today, though that breakfast sandwich and DONUT OF THE GODS has begun to set me straight.

Also, for those who know Tom: OMG TOM WENT TO A NETWORKING EVENT. He's so awesome.

On the agenda for the rest of the day: getting my haircut at StarDust on Magazine Street. Not only is this my first haircut at this place, it's my first haircut in New Orleans and also my first haircut since (seemingly) the dawn of time. I had a vague idea to let the hair grow out so that I could put it back in a ponytail or something, but that is a pretty low-glamour goal- for me, anyway. I don't look so great with long hair.

Re: this evening's plans- I think Tom used up all his socializing energy last night, because he's not interested in going to either nerdnight or the Satchmo Stomp. I am idly thinking about going to Frenchmen by myself, but now I wonder if I should just go to bed early so that I can get up early enough tomorrow morning to get a dozen donuts at the Freret Street Po'Boy and Donut Shop. Mmmmm...
Posted by Nora at 10:04 AM