I've been wanting to get on the red beans & rice Monday tradition for a few weeks now- problem is, I always forget about it till Monday afternoon, and it's too late to get the beans going by then. BUT, yesterday I remembered!

Since Link's book is lacking a red beans & rice recipe, I turned to the internet. I read up on various recipes and traditions, and settled on this recipe from Emeril Lagasse, with the following modifications:

I doubled the tasso at the start, used only one hock and added about a quarter pound of pickle pork. I also used slightly less andouille. It all worked out. I'd read that using a bone in the beans was key, because the marrow/gelatin imparts an excellent flavor and texture to the broth. I would agree with that.

Those were the best damn red beans I ever had. One issue though: since we moved here I have not been able to cook rice correctly. I don't know if it's the long grain "Louisiana style" rice or (more likely) using an electric range, or what, but it's annoying. I'm seriously thinking about getting a steamer. 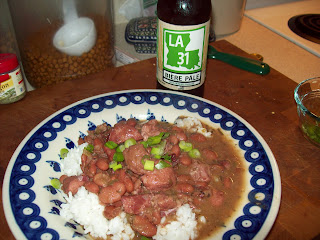 Note the LA 31 beer accompanying- it's so good with Cajun/Creole flavors.
Posted by Nora at 7:49 PM