Tales of Tales of the Cocktail

So, when I arrived at the Hotel Monteleone last Wednesday, I was greeted by the Kahlua girls in the lobby- they handed me a punch card that was to be stamped at every Kahlua product station in the morning bar.

Ah, the morning bar. Sponsored by Kaluha! I got an iced coffee and splooshed a little Kahlua in there, and then I had the brunch cocktail - Black Paloma - which had Kahlua, tequila, grapefruit juice, lime juice, bitters, and club soda. I liked it. The citrus juice really brightened the drink.

I checked in with the volunteer coordinator (I was an hour early) and wandered about for a little bit getting the lay of the land before putting together some swag for one of the tasting rooms before it opened. It was... the William Grant & Sons Mixability, which had Lillet, Solerno Blood Orange liquor, some sort of root liquor... Root...I was intrigued by the cocktail (The Appalachian Flip)mixed by that fellow... had some raw egg, topped with Sierra Nevada Pale Ale... sadly, it didn't really grab me as I wished it would have. I was also in a hurry, because I had to turn a room after a seminar.

So after doing that (clearing old glasses, sample pours, paperwork, etc. and then resetting) I wandered to the other tasting room happening, the Dos Maderos Rum room. Ooh, that was a good one. The PX was the aged sipping rum that I only intended to take one sip of, but it was so smooth and delicious I ended up polishing off the snifter (which was a small amount WITHIN the snifter). They also had a make your own mojito bar, some sample bottles of 5+3, and some much needed protein based snacks. They had another table with other cocktails that I did not partake in but heard one of the ingredients described as "cigar bitters" which... I am not too thrilled with this turn of ingredients. Muy macho! But that's just me.

After lunch provided by Jacque-Imo's in the staff/volunteer suite, I went to check out the tasting room downstairs for Wodka Polska vodka. Eh. I don't care so much for vodka, but the best part was the vodka popsicles made by Popstars Icicle Treats. 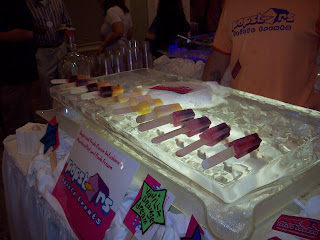 Then, my shift over, I decided to cab home to take a nap before heading over for my evening shift, the Welcome Reception sponsored by Beefeater, at the Contemporary Art Center on Camp Street. Mostly ran around doing prep work (unpacking and wiping down glasses) and then tried to keep things tidy throughout the party.

Very, very fun. There were great cocktails and great food, a great DJ, and and a photographer with an Alice in Wonderland theme. Everyone seemed to be having a super awesome time- I actually ran into one of the bartenders at Coquette, which was great.

Man, this was long. I'll catch up on Thursday's activities later...
Posted by Nora at 2:52 PM