Tales of Tales of the Cocktail, part 2

So, Thursday morning I wake up with a surprising spring in my step, considering how many gin cocktails I'd had the night before. Well, I tried to keep eating through the night and was picked up by Tom at 10pm, so that must have helped.

Back to the Monteleone, early again. After my Kahlua Black Paloma brunch cocktail, I was told to go up to the VIP lounge on the secret 17th floor. However, they didn't need me, and I went back down to help out with the common folks. Was OK- much more interesting down there anyway. So, I was put to work helping with the Casa Noble tequila tasting. I helped set up, and then helped pass out the two tequila cocktails that were specially created for the Casa Noble tequilas. I liked them both, but especially the second one, that was created by a bartender from Brooklyn named Abigail Gullo- it was tequila, mango, lime, chili pepper... it was really good. Salty, sweet, spicy, fruity. She did a cinnamon chili salt rim as well. I know I had both recipes, but I can't find them with all my paperwork...it is HARD to stay organized during Tales.

OK, once this session was over, I tried to find lunch, but it was woefully late. I went back to the Bonnet Carre room to help set up with the Grand Marnier tasting. They were offering the 4 base cognacs that make up Grand Marnier as well as the three Grand Marnier products, which was fun to pour. I was finished with my shift right before it started, but I bailed out to attend the Absolut Brooklyn tasting room. They had a hot dog cart, 3 awesome cocktails, a great DJ and breakdancing. Also, SO MANY HIPSTERS. 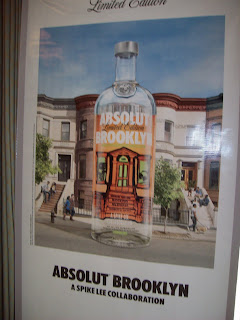 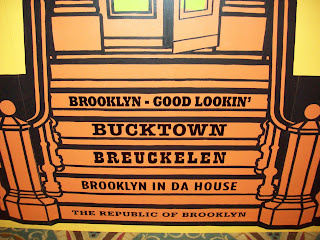 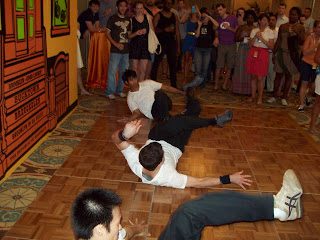 After watching hipsters shake their thangs to 90s era DJ mixing, I decided to check out the bookstore- I found Dr. Cocktail (aka Ted Haigh) outside of the bookstore signing copies of his awesome book Vintage Spirits and Forgotten Cocktails. I already own this book- in fact, it was a huge kick forward for us in making awesome cocktails at home. I told him this, and the fact that it has survived several spill incidents. He asked how the book has held up in the face of such punishing use and abuse, and I reported that it was OK, but it would be better if he had waterproof/spillproof pages. He very seriously responded that he had tried to get that idea approved by his publisher, but no go. I don't know if he was messing with me or not though! I will keep an eye out for how his next book looks, though.

I went into the store and bought a book for Tom: And a Bottle of Rum: A History of the New World in Ten Cocktails written and autographed by Wayne Curtis, noted rummy. I bought myself a book too, a Poppy Z. Brite novel set in New Orleans called Liquor. Brite is married to local chef, Chris DeBarr, who runs Green Goddess, a restaurant I have been to once and enjoyed, but I think that DeBarr runs dinner service and I was there for lunch. Hmm, according to Wikipedia, the book I got is the first in a trilogy, which bodes well for my future travel reading plans!

OK, after that, I needed to get out of the Monteleone. I headed outside and was handed some crazy St. Germaine based cocktail with carbonated sauvingnon blanc. I kind of wanted to go have a French 75 at Arnaud's French 75 cocktail bar, but I ended up instead at the Antoine's bar with a Negroni. 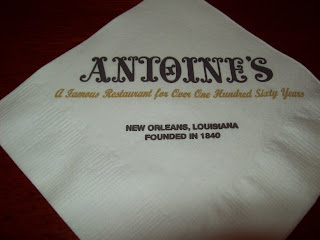 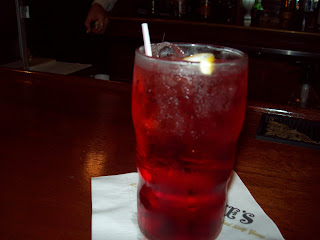 I ended up at a reception at the Cabildo, where they were mixing 4 cocktails for every decade in the 20th century. I only made it to the 40s when I decided it was time to call it a night. I grabbed a cab and went home.

I wasn't feeling well the next day (part hangover and part coming down with whatever the hell cold/bug this is) but I went to my lunchtime shift at the Dickie Brennan's Steakhouse luncheon. After that I realized that this was actually not a hangover, and I ended up having to cancel my shifts on Saturday and Sunday, as well as the comp event I'd planned on taking Tom to on Saturday night. There was lots of cool stuff going on, not only with Tales- Garrett Oliver was in town at The Avenue Pub and there were several events around his visit that we'd both been looking forward to. Alas, it was not meant to be.

In conclusion: Breakdancing!
Posted by Nora at 8:46 PM