I had a job interview this morning. It was close to Brocato's so I stopped by and got a small cup with peach and blueberry ices. I ate it at the store as a family of four came in and a group of three 20-something tourists came through. I also ordered 2 cannolis to go, and dropped one off for Tom at his office (his empty office, everyone was out at Felipe's for lunch.)

The ices were so good! Very flavorful- the peach one was much smoother in texture but they both tasted like summer.

I had a yearning for some fried chicken so I went over to Emeril's for their chicken and waffles. Emeril's puts out some really good food, but I tend to get sketchy service while I'm there. Maybe because I'm not an obvious tourist? I sat at the chef's bar (overlooking the kitchen) and ordered the soup of the day, which I *thought* was a garlic soup with mushrooms, but ended up being a garlic-crab soup? Which was OK, I guess, but I wouldn't have ordered it had I known. And I wasted valuable stomach space on it! For, behold! 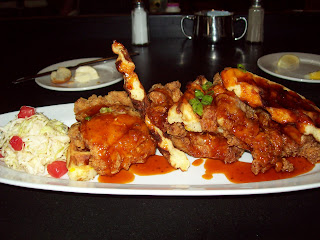 Was delicious- I ended up boxing most of it and bringing it home for dinner tonight. THE CHICKEN AND WAFFLES HAZ BESTED ME OH NOES!

Note: I will be volunteering for the Tales of the Cocktail event from Wednesday through Sunday. See you on the flip side!
Posted by Nora at 5:22 PM