Liuzza's By the Track

This morning was pretty lazy, Tom played some LEGO Rock Band on the Wii (which... adorable!) and I got up and went back to bed a couple times. 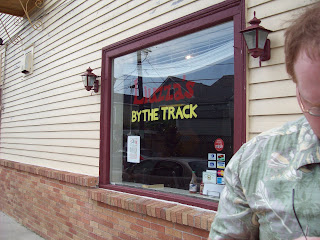 Eventually we decided to head over to Liuzza's by the Track in Mid City for some lunch. We'd gotten a Living Social coupon for the place a couple weeks back, and I was excited to try it- I'd heard some really good things about the place and their specialties. Liuzza BTT is a sort of hole in the wall type restaurant- no frills, just some tables, a bar, awesome food, and schooners of Abita Amber on draught. What's not to love?

So, we get there, I order a bloody mary (still one of my favorite things in New Orleans, the pickled green beans and other goodies in one's bloody mary), Tom ordered a small beer (he is suspicious of beverage served in containers named after ships) and we both ordered a cup of the creole gumbo, which was simply excellent. They cook the shrimp to order for each cup or bowl of gumbo, so the shrimp are perfectly cooked, not overcooked at all. The gumbo also had sausage and chicken in it. Spicy and delicious.

Tom ordered the Garlic Oyster Po'boy which he enjoyed. I ordered the specialty of the house, the BBQ Shrimp Po'boy. Believe me when I tell you this was possibly one of the best things I have eaten in New Orleans. BBQ shrimp (for those not from these parts) are not in what you would think of as traditional BBQ sauce. The sauce is butter and black pepper based and it is pretty incomparable to anything else ever. 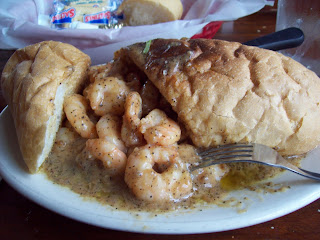 So, it was a LOT of shrimp. Delicious, delicious shrimp. I was determined to finish it. Which, I didn't quite do- I left maybe 3 or 4 on the plate and Tom ate about a half dozen or so. The bread and the shrimp and the sauce...
Posted by Nora at 1:17 PM