Eating and Drinking... just another Friday in NOLA

Yesterday I decided it had been a while since I'd gone out for a fancy Friday lunch, so I went to Patois and had the duck. andouille, and greens gumbo, the skirt steak sandwich, and two cocktails: The Contessa, a champagne based drink with Regan's Orange Bitters, Cointreau, candied ginger, and a twist of lemon; and also the Eau de Melon, which was watermelon juice, lemon juice, muddled cucumbers, vodka, and limoncello. 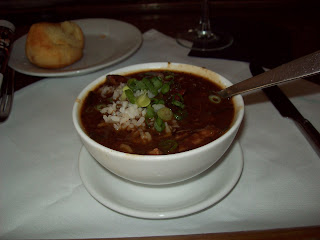 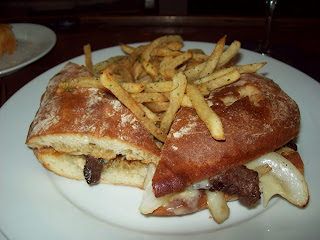 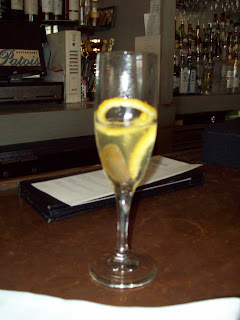 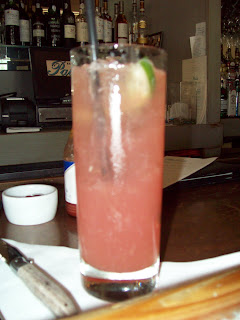 It was pretty good- I loved the gumbo. The sandwich was OK- I liked the worcestshire aioli but not the cheddar - too much in the mix. There were some very delicious fries that accompanied it, too. The cocktails were very nice, especially on a hot day.

On the way back home, I noticed it was just a few minutes before 1pm, Hansen's opening time! I stopped by and got in and had myself a black cherry and vanilla bean (with condensed milk.) 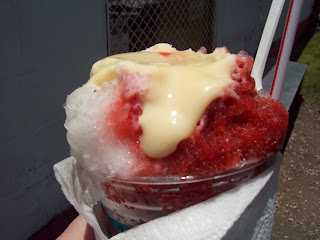 After I picked up Tom, we went to the Avenue Pub- they are starting a new promotion to encourage beer geeks to drink up on the balcony- $1 off pints served on the Balcony if you open and close your tab upstairs. I had a Brooklyn EIPA and the North Coast Acme IPA, and a Brooklyn Blast (Double IPA). The Blast wasn't $1 off, because it's only served in 10.5 oz. glasses. We headed downstairs and Tom had Sierra Nevada's new seasonal, the Tumbler brown ale, which is slightly spiced (and apparently is replacing the Anniversary Ale this year!!) I had a small glass of the NOLA Brewing 7th Street Wheat.

We got home and didn't feel like cooking or doing anything else except drinking more beer. So we headed out to Parasol's, had roast beef po'boys and several beers. I was working the jukebox, to the delight of the crowd (which delighted me!) and made a few friends next to me at the bar. This led to a lemondrop shot, which was just, well, you know... straight vodka.