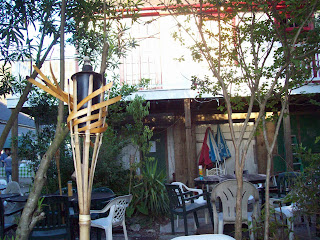 So, last night we went out to Bacchanal in the Bywater. Bacchanal is a wine store/deli/restaurant/jazz club with a courtyard and a cat: Basically you drive out to the Bywater on St. Claude, take a right before the bridge, drive all the way to the end of the road, and there's Bacchanal on the right hand side of the street on the corner.

How it works at Bacchanal is that you buy a bottle of wine (they also sell by the glass, but it makes more sense to buy the bottle at retail-as opposed to restaurant markup- prices) or beer or soda (they had a nice variety of Grown Up Soda.) They have a variety of cheeses in the cooler as well, if you pick that out, they'll arrange it for you with crackers and whatnot. OR you can order one of the deli sandwiches. OR, in the courtyard, you can pay cash to the chef for some AWESOME food. That's what we did, after buying a lovely bottle of rose. 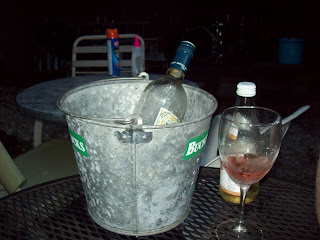 We started by sharing the artichoke confit crostini with arugula, preserved lemon, shaved onion, and truffle oil. Then I had the grilled skirt steak with chimichurri, duck fat fingerling potatoes, asparagus, and mache: 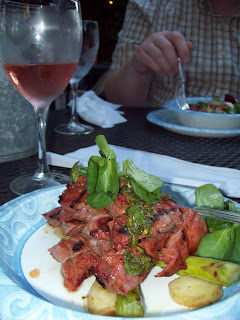 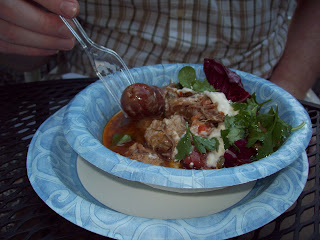 We also had the cheesecake with bing cherries, mint, and Kentucky Vintage Bourbon, which disappeared before I could take a picture: 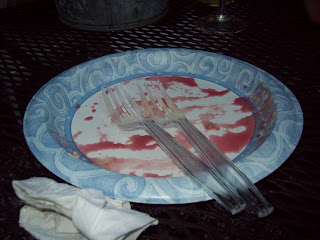 Then the band started: 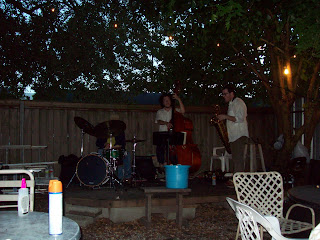 The band playing was The Jazz Lab with Jesse Morrow featuring Johnny Vidocovitch on drums, which was sort of a jam jazz band type of thing, very enjoyable to watch and listen to.

At the band break, we decided to take off, which we did after the long slow moving train passed by (we were totally cut off between the 2 sides of water and the train track cutting through the neighborhood). I wanted to try a local place I had passed by dozens of times and only noticed this past week, the Bridge Lounge.

I was intrigued by the mojito menu and ordered the white-peach mango mojito. I didn't get a lot of mango in it, but it was really excellent and refreshing- fresh mint and lime muddled up. Nom! We only stayed for one drink- Tom had the Sierra Nevada Summertime that was on draft. They also had 3 NOLA Brewing beers on tap, as well as a french lager and a fancy Quebecois wheat beer. Also other yummy looking cocktails. 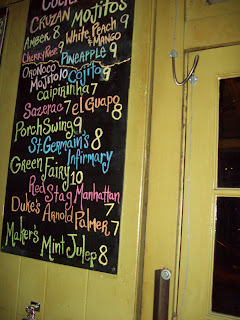