Sloppy seconds of Tropical Storm Alex has made it much rainier than usual yesterday and today (the weekend was glorious, though!) As I've mentioned before, there are almost always afternoon downpours, but they come through and leave very quickly. The stuff this week is really sticking around. Makes it hard to motivate to explore.

Yesterday, pretty much the only thing I did was make it to breakfast at Surrey's on Magazine Street. 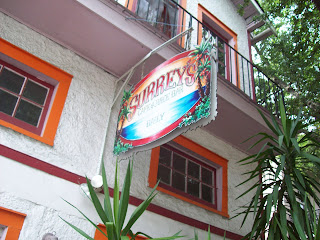 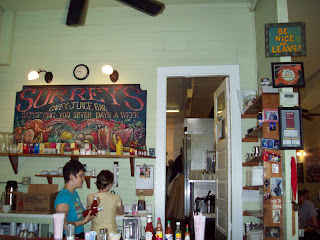 Still scarred from my previous breakfast debacle, I didn't order too adventurously. Also, it was early-ish on a Monday morning and my stomach was still waking up. So instead of the hogshead cheese eggs benedict or enormous plate of eggs AND bacon AND sausage AND ham AND grits AND biscuits with sausage gravy, I just had the Surrey Special, which is your standard eggs (over easy), meat (maple cured sausage), biscuit and starch side (in my case, grits, of course.)

Surrey's is also a juice bar, so I had some of their fresh squeezed lemonade. When I ordered the lemonade, the waitress (who called me "hon") asked me if I wanted watermelon or strawberry juice added to it. Since I've been on a watermelon lemonade kick (and hope to make some in my own kitchen soon) I went with that.

It was a nice plate of food. The sausage wasn't in preformed patties, and was really tasty stuff. Eggs were cooked perfectly, the grits were nice and well seasoned, and the homemade biscuit was delicious. Yay! Now I know a place nearby that is mellow and has yummy breakfast food.

That was the highlight of the day, really- I was waiting on word of a job I'd applied for, and waited all day till 6pm, when I found out I didn't get it. So, waiting for that news and also getting it pretty much sucked. It's not that big a deal- I don't know that I'm ready to go back to work yet - but it still is no fun.

We ended up ordering from Reginelli's after Tom cheered me up with a delicious "Martinez" cocktail. The recipe I found closest to what he made, which was on the bottle of Old Tom gin we recently acquired, can be found here, but we did 1.5 oz each gin and sweet vermouth and used orange bitters instead of Angostura. It's funny how many variations there are on this classic cocktail, said to be the inspiration for the modern martini. I loved it! Although, I really love sweet vermouth. so that's no surprise.

We ate pizza and drank Martinezes and watched a few episodes of season 3 Ashes to Ashes before my head and stomach said, "enough!" and thus ended a kind of crappy day. Which wasn't actually so bad at all.

Today's weather is similar to yesterday's, but I was much more productive. I finished my grocery shopping for dinner tonight and tomorrow, picked up Tom's shirt that had been repaired, and worked out how to beat the outrageous prices of spices at Whole Foods. While a jar of cardamom seeds was $10.99 (!!!!!), they had it in their bulk spice jars and I got a couple teaspoons (all I needed) for 69 cents. Same for tumeric and garam masala. Whoo hoo!

I came home and chilled out for a while, listening to the rain, watching Law & Order repeats. I read on Chowhound that Cochon was open for lunch (it's open continuously from 11am to 10pm with the same menu all day,) which was news to me, and I was off! It was pouring, but whatever!

I ordered the Boss Hogg cocktail to start- watermelon juice (I know, I know...), cucumber vodka, and moonshine. 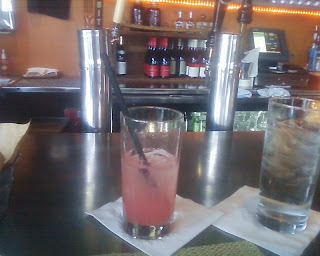 Yummy! I found out later that they make their own maraschino cherries and also infuse them into bourbon to make Cherry Bounce, which: jebus, I gotta get over there without my car soon.

I ordered their shrimp and deviled egg gumbo, which is just how it sounds: a deep dark shrimp and sausage gumbo with a deviled egg in the middle of it. I'd heard folks from around here say that it reminded them of family recipes that would include hard cooked eggs either in the gumbo or as a side. 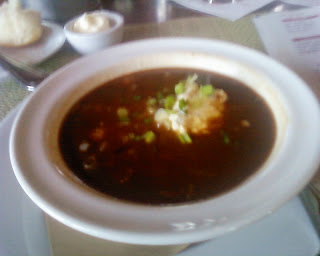 It was really delicious, and unexpected, and wonderful. So much flavor.

I'd seen a couple oyster dishes on the menu- after hearing other sad tales of supply and pricing issues, I checked to see if they were still offering those oyster options. The bartender said they were getting their oysters for the time being from the west coast of the Gulf, from Texas, which was still uncontaminated. For now. I figured I should enjoy the oysters while I still could, and ordered the oyster and bacon sandwich: 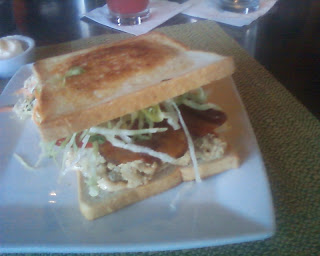 Which was, as you can imagine, INSANELY AWESOME. The oysters were beautifully fried, the tomato was sweet and delicious, the remoulade sauce was tangy, creamy and sweet... it was like an oyster po'boy + BLT... ON CRACK. (also, a moment to celebrate the pickles they serve, the unsung heroes of sourness and vinergary heat.) They cure their bacon in house so you know everything on that sandwich (and in its immediate vicinity) was magically delicious.

As I finished up, the bartender brought by the dessert menu. I eyed the blueberry cobbler with creole cream cheese ice cream and thought about how nice it might be to savor that with a cherry bounce cordial. But I could see there was a break in the rain, and it was coming up on my time at the parking meter, so I passed and left quite satisfied.
Posted by Nora at 3:09 PM